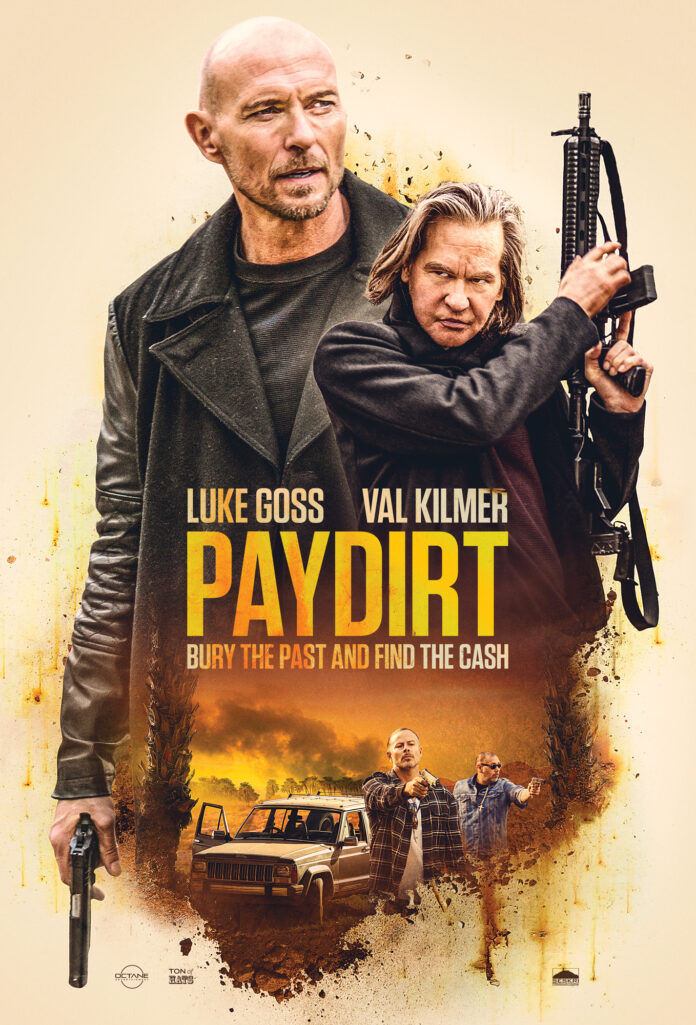 Paydirt. Not what our Editor pays us but actually what the characters in writer / director Christian Sesma will hit if they can find $37m dollars buried by Damien Brooks (Luke Goss) aka The Brit when a DEA bust on him and his crew goes awry. For The Brit it’s a five year prison sentence trying to avoid getting tossed around like dog’s toy and for Sheriff Tucker (Val Kilmer) who headed up the drugs bust , its ignominy, early retirement and trying to avoid involuntary euthanasia.

But the money remains missing and the Sheriff and the cartel, from whom it was stolen, are all after it and so is The Brit when he is released from prison. Getting his crew back together , all of which have a moniker beginning with B namely The Babe, The Badass, The Brawn and The Brains yet regrettably Paydirt is not The Bollocks it so desperately wants to be.  Written by Sesma this has a whole load of story threads to explore, genre tropes to usurp and clichés to reinvent. Unfortunately it doesn’t. And it’s a shame because there’s plenty here to play with; the gang member who gets it on with the sister of one of the cartel, the sheriff after the stolen money for himself, the bisexual babe and her boxer girlfriend, the squabbling Brains and Brawn duo…..and at the centre of it all is cool hand Luke Goss doing his best to keep his gang one step ahead of the cartel and their trigger happy thugs.

There’s a whole lot of cliches to play with here and Paydirt is hugely influenced by Guy Ritchie’s gangster genre with its on screen character names, throwback throwaway scenes, its multiple role call of characters and twisty turny plot. Regrettably Paydirt serves to show just how good Ritchie’s films are and this sags badly and loses pace dramatically half way through and Paydirt’s payoff doesn’t really payout. And it’s a real shame because Luke Goss is a likeable screen presence having left his boy band days way behind and having lost so much weight here he’s skeletal to the point where he could surely secure the role of Red Skull in Captain America just by painting his face red. Goss is by far the best thing in this and frankly deserves better having appeared in far too many straight to VoD dross. So too does Val Kilmer who is a dishevelled  wreck  that’s it s a shock to see him now…….. he was Batman!. Admittedly he had had a rough time suffering and recuperating from throat cancer and goes some way to explain why he wears a scarf wrapped round his neck at all times even though this is set in sunny California. It’s quite disheartening to see an actor who had so much potential reduced to this and likewise for Goss who was so good in Blade II and Hellboy II both under Guillermo Del Toro’s direction. So please, someone, offer them a decent film because both deserve better.

Luke Goss talks about the film and reveals an exclusive about Bros……..

Here’s the trailer for Paydirt…….