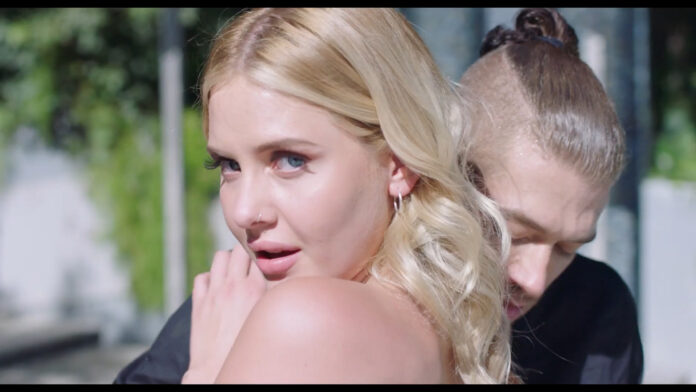 Bella Cherry is Linnea, a 19 year Swedish girl who has travelled to LA to start a career in the adult film industry having told her mother that she’s gone to the US to find work as an intern. Living in a ‘model house’ with several other girls all working in the same industry Bella is determined to succeed but initially wanting only to take it a step at a time she soon realises that to get to the attention of the top producers she must participate in more extreme and ultimately demeaning acts and Pleasure follows her journey.

As Bella actress Sofia Kappel is astonishing in what is her debut performance in an extremely demanding role for even the most experienced and accomplished actress and she commits absolutely to what are at times both disturbing especially in one uncomfortable and upsetting scene. Director Ninja Thyberg, herself an admitted anti-porn campaigner, has shot in unflinching detail scenes notably one where she is violently brutalized by two men that blurs the line for audiences as to whether Kappel is acting or is understandably highly distressed at what she is being put through. Thyberg has developed the feature from a short film and undertook extensive research with her script with a lot of apparently accurate detail (Bella refuses to wipe her face clean until she has taken selfies for her Instagram account) and has also cast many real life adult actors and producers. Her film refuses the accepted norm that women only get into the industry due to familial abuse or father-daughter difficulties. Bella does not really want to be famous or earn millions but rather just wants to be the best.

Pleasure is an unflinching examination of an industry that has been well documented but whose dark side is not really known and its effect on women within the industry and portrayed here is dehumanizing which comes to fruition when Bella goes to film a scene with a rival star actress wanting to maintain the upper hand by humiliating her until Bella upturns the power balance by brutalizing the actress.  Throughout the filmmaking she makes compromises to attain her goal to be the best but by this particular scene Bella has lost sight of herself.

This takes a look at an industry that is both misogynist pushing women to ever more extreme acts and also racist where performing with a black actor is perceived as the most taboo of acts. Though Pleasure is shocking it only confirms what is suspected about the industry which explains why several of the real life stars from the industry who have appeared in the film have spoken out against it. But at the centre of this is a stunning stand out central performance from Sofia Kapell who has something of the Scarlett Johansson about her in what is a star making turn