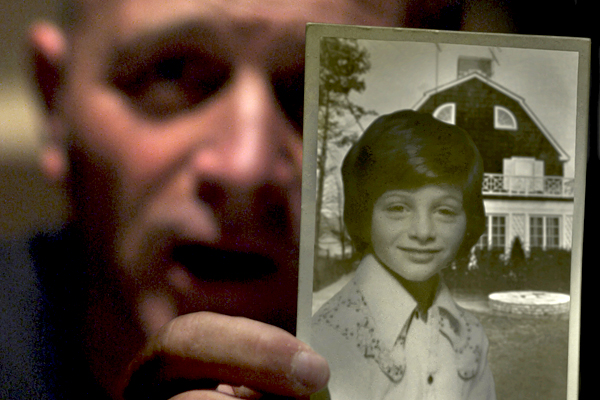 Daniel Quaratino. Who? Try Daniel Lutz. Maybe.  But mention the kid from ‘The Amityville Horror’ and you know who it is. At 10 years old he was the oldest child of Cathy & George Lutz, his stepfather, who moved into  112 Ocean Avenue, Long Island, New York only to flee from it in terror 28 days later (good title for a film surely). 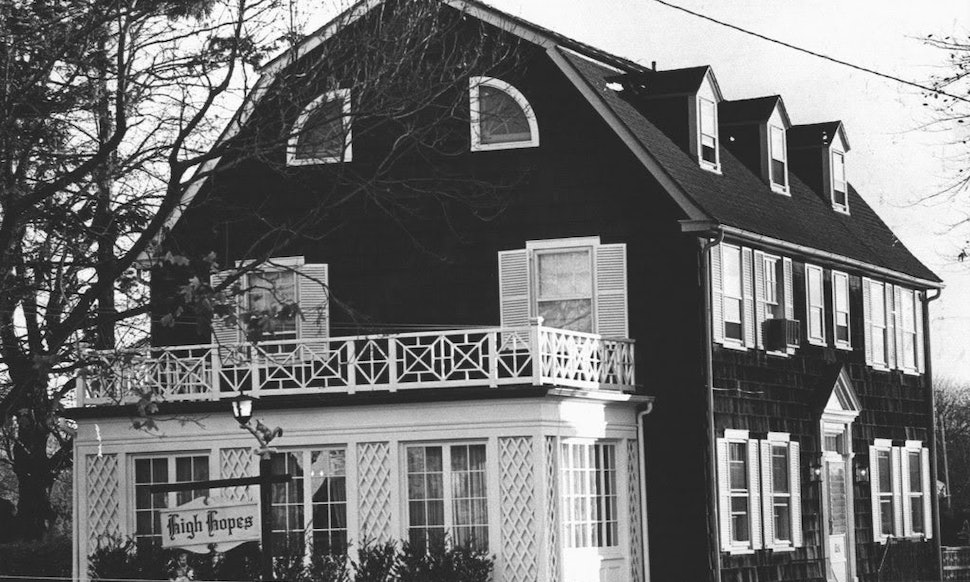 Much has been written about the famous Amityville house and numerous films of declining quality have emerged since the original film came out in 1979. But Daniel Lutz now in his late 40’s has for the first time come out to tell his story. Estranged from his wife and children and now living back in New York he strikes an equally frightening figure. Heavy smoking electric guitar riffing and shaven headed he stares at you with his piercing blue eyes as he recounts his story keen to validate what has happened and counter the rumours that it was all one big hoax by his parents. It doesn’t help that it was Lutz who actively sought out film maker Eric Walter who ran a website devoted to the spooky shenanigans.

Lutz calls the whole story an ‘unfortunate gift in my life’ and in fairness his stepfather and now deceased mother certainly made money from it .

Starting life as Daniel Quaratino his original parents divorced when he was seven years old and he grew close to his mother until she met George Lutz, an ex marine, who insisted on her children calling him ‘Sir’ or ‘Mr Lutz’. Danny now fondly refers to him as ‘the biggest f**king prick you could ever meet’ and it seems that from the very start there was animosity between the two of them. George Lutz was a lapsed Methodist and had developed an unhealthy interest in the occult. When Cathy and his children had been at his house one day Danny noticed his shelves, rather than being stocked with old atlases, classic novels & dictionaries instead were laden with books on transcendental meditation, hypnosis, human sacrifice, devil worship and other satanic matters. So it was hardly surprising that Danny’s cousin, Bobby Sylvester, himself described George as being , ‘not right’ telling Danny , ‘Something’s off with this man’. And they certainly felt there was something about his presence that was unnerving. George had a hold over Cathy too insisting that he would only marry her if he could adopt the kids and change their surnames to his i.e. Lutz. Now married they moved into the house which they had bought for $80,000 all the more of a bargain as it included all the contents too.  Perhaps they should have left the contents as these were ones that had been present at the time of the DeFeo murders  where on November 13th 1974, a 23 year old Ronnie DeFeo had shot both parents and four brothers and sisters with a shotgun.  Given its history it was possibly not the best family home to buy. Incredibly he denied that he had done it saying it was the work of a hitman but quickly owned up claiming to have been possessed with voices in his head telling him to do it. The Amityville case quickly gained notoriety and with DeFeo jailed and serving  six life sentences the inevitable books were written.

Bizarrely when the Lutz family first looked around the house Cathy quite openly told the children what had happened there. Nonetheless they still bought the house which Danny said he was looking forward to moving into because it was so big.

Perhaps the first sign that all was not right was Danny noticing a priest arrive blessing the house with Holy water. This was where the famous, ‘Get out!’ remark was allegedly heard.  As the priest blessed the house Danny took a box  up to the playroom only to find it full of flies – all the more remarkable as this was the middle of December. Danny went ballistic as he swatted dozens of them before running downstairs to tell his mother. On their return the room was empty.

This set the scene for the next few weeks with the original film making hay with the alleged ‘incidents’. According to Danny the garage door flipped up and down of its own accord, in his sisters room a rocking chair swung back and fore of its own accord and whilst he was in the back garden pool area Danny looked back at the house and in the upstairs rear window he saw what he describes as , ‘a red eyed cartoon angry pig’ – every home should have one!  But it was 6th Jan 1976 when things really started to go crazy it was the day they took down the Christmas decorations. ‘All hell broke loose’, says Danny. There was an immediate stench around the house (too many Brussels sprouts at Christmas dinner maybe?) so Danny lifted open the window and as his attention was distracted by one of his siblings the window slammed down on both of his hands.  Hurtling downstairs to the kitchen his mother put ice packs on his fingers but as they did so the kitchen door slowly creaked open and some kind of spirit drifts in bumping into his mother before knocking a knife, which she had been using to make peanut butter sandwiches, onto the floor. An indentation appeared on the padded seat of one of the kitchen chair seats before disappearing. His fingers which were badly swollen at this point immediately went back to normal.

Inevitably on the night of 14th January 1976 with incidents getting more intense the family fled the house and went into hiding.

So what really went on in Amityville’s alleged house of horrors?

It’s always been a bone of contention as to why the George and Cathy Lutz went public and started doing the rounds on TV chat shows endorsing the book that they has collaborated on with Jay Anson. By this time the house already notorious due to the murders now had a second boost to its infamy and all and sundry were cashing in on it with their opinions and ‘expert’ analysis  and so understandably the Lutz’ felt that they should set the record straight and put their side of what happened.  After all it was their story so why shouldn’t they turn it into a little earner for themselves? A local TV crew seeing a great story spent a long night at the house with one of their senior reporters and the usual gaggle of parapsychologists. Nothing happened. In fact the same reporter went to the see the film some years later and said he found the audience more frightening than the house. As newsreel was shot on film at the time the channels film editor went through all the footage to find something, an image, anything that might back up the story. He found nothing. In fact the only thing that did occur was the cameraman suffered from heart palpitations which he had never suffered from before.

It was the respected self proclaimed demonologists/ para-psychologists  Lorraine & Ed Warren who visited the Amityville house who lent gave the house  a degree of authenticity with Lorraine describing the presence  as a ‘demonic force from the depths of Earth’. Lorraine Warren herself went into Ronnie Defeo’s room and immediately backed out of it fearful of the presence in there. Even the local clergy warned Ed Warren not to go into the house again – advice which they duly acted on. Again it was the looming presence of George Lutz that Lorraine Warren found unnerving finding herself very wary around him careful as to what she said in his presence.  But perhaps most telling is that she was so disturbed by the house that as she wandered around it hidden in her hand she clutched a photo of a Roman Catholic padre who at one point she said appeared as a spirit to her in one of the rooms. 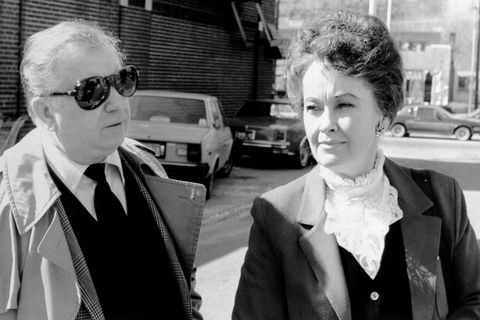 But it’s George Lutz that that the case seems to depend on as to whether the whole Amityville haunting was genuine or not…………….(to be continued here)

The Amityville Horror is available on DVD / Blu ray now