Following on from Part 1…….Violence in the Amityville house was common and he would frequently use wooden spoons to chastise the children. Danny freely admits to loathing George not recognising his stepfather as having any parent skills whatsoever. Worse still Danny even admitted to trying to kill George suggesting  that George’s personality and belief in the occult was the catalyst  that triggered all the devilment  in the house.

Danny recalls a time before they moved into the house when George was in his own garage with friends and through telepathic skills was moving things around before Danny stumbled in on them. Later that same day Danny had a Doctor’s appointment and told him everything he had seen. His reward for this was the Doctor telling his mother about the story which was shrugged off as, ‘kids and their crazy stories’. It’s important to remember that Danny was only 10 at the time and like most young children was sensitive enough to be open to suggestion. With both parents believing in the occult it only took a throw away quip along the lines of, ‘Hey! I can move things with my mind’ for a child to think, ‘I wonder if he can?’  Psychologists have gone on to explain that a child’s memory gaps are easily filled in with imagining more interesting things.  Danny was well aware of the history of the house, a priest had been there blessing it when they moved in, and it’s difficult for a child sometimes to differentiate between fantasy and reality and none of this would have been helped by George Lutz himself.  Danny was effectively ‘soaked in suggestion’ as one psychologist puts it.  Danny has never spoken about the Amityville  incidents openly before and it could be levelled that after so many films, books , TV specials etc that his recollection could be down to  post event suggestion. But Danny’s stories are detailed, confident and told with emotion which makes it all the more persuasive. 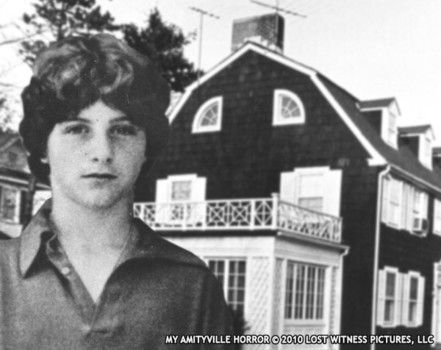 Much has been made of the fact that George Lutz was stretching his finances to buy the house and that the ‘possessed house’ story was a scheme to get money. The rumour was lent credibility by the fact that his business was flat lining and they found that they could not sell the house either. But an examination of his finances at the time show that his mortgage payments were all made up to and beyond the day they fled the house until Lutz handed the house back to the bank. Even so when the media started paying attention Lutz revelled in the attention referring to himself as, ‘The Amityville Guy’

Yet at the same time many parapsychologists who entered the house felt black magic had been practised at the house and that at the very least there was or at least had been low level paranormal activity going on. After leaving the house Danny ran away from his family eight times and eventually stopped going to school. At one point his parents left him at a Catholic Monastery as by now he had developed quite severe problems dealing with authority but again he ran away a couple of times claiming that they had performed exorcisms on him as he was possessed. By 16 animosity between Danny & George had achieved Olympian levels and he left home claiming to have gone to live in the desert with friends. It’s not the first time Danny has claimed to be possessed claiming that George had been too describing the feeling as being like a, ‘numbness after being shot’. Though this contradicts Lorraine Warren who believed that as he had been baptized as a baby he was protected.  Throughout much of his adult life Danny wandered around the US trying to assimilate into communities not wanting to be known as the ‘Amityville kid’. Did Danny blame George for taking his mother away leading to a sense of loss of control? And when it came to filming the documentary, ‘My Amityville Hell’ was following him around with a film crew really going to be conclusive after all he was hardly going to say yes it was all a hoax and an industry that has evolved around the story crashes and burns. Interestingly neither of his two younger siblings agreed to be involved in the documentary which solely focuses on Danny.

Since the Lutz’ moved out there have been five other families reside at the address none of which have reported anything suspicious or creepy. Not even a creaky door. Most damningly the attorney, William Weber, admitted that with Cathy & George they’d made the whole thing up after a Bacchanalian night of excess on the wine.  Though this too was undermined when it was revealed that Weber was in a legal battle with the Lutz’ at the time and was his attempt to undermine them.

Nonetheless  to flee your home with your kids in the middle of the night is a pretty drastic measure to take and then to hope that the kids keep a lid on any cover up for years to come is a pretty big ask.

Which begs the question why, almost 40 years later, did Danny keep quiet until now?

To be continued here…..

The Amityville Horror is available on dvd / blu ray now