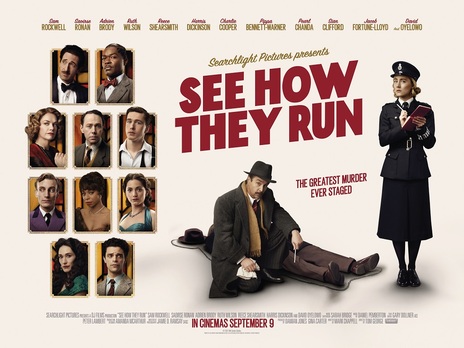 Those all-star Agatha Christie murder mysteries have had something of a resurgence with the success of Murder on the Orient Express and Death on the Nile (reviewed HERE) and the similarly inspired Oscar nominated Knives Out sees a sequel about to be released too. See How They Run follows in that tradition this timed based around the long running Agatha Christie stage play ‘The Mousetrap’ and a stipulation of the plays run was that no film could be made whilst it was still in the West End or within 6 months of it closing  –  which much be something of an irritation for prospective film producers as 70 years later the play is still, running with no sign on stopping.  See How They Run is a murder mystery set around the play and its cast.

Set in 1953 the film opens with a voiceover telling us its always the moist unlikeable character who gets bumped off and right from the start its clear that that person will be arrogant film producer Leo Kopernick (Adrien Brody) breezing around an after show party celebrating the 100th performance and generally just irritating the cast, crew and staff. So its little surprise that he winds up dead battered to death in the basement of the theatre leaving it to a world weary disenchanted Inspector Stoppard (Sam Rockwell) aided and occasionally abetted by Pc Stalker (Saoirse Ronan) keen and eager and not yet ground down by cynicism.

It’s an often self-deprecating but very clever script written by written by Mark Chappell who right from the start bravely throws in a line, ‘You seen one, you seen then all’ but its far more than that with a load of knowing lines that are often loaded with meaning – (the title itself is a reference to how long The Mousetrap seems to have been in the West End without an end in sight). His script adheres to the tradition of the genre where everyone is a suspect and in the grand tradition of Christie’s books all is revealed when the whole cast are gathered together in a room.

Though the film doesn’t have the mega wattage star power of Murder on the Orient Express there’s still a great cast of actors led by Rockwell’s cynical cop countered by Ronan’s optimistic rookie and they are an entertaining screen duo.  Some of the roles are perhaps a little underwritten and Harris Dickenson’s as Richard Attenborough is not quite the easily tearful luvvie that he became in his later years.  David Oyelowo is amusingly prissy as an over protective writer and especially enjoyable is Tim Key as the over confident, arrogant yet bumbling police commissioner and steals all of the scenes he is in.

Director Tom George with a background in TV that includes the legal drama ‘Defending the Guilty’ and documentary comedy ‘This Country’ (he’s cast Charlie Cooper from that show in a pivotal role) is ideally suited to what is a drama with amusing elements and uses an effective split screen technique for his flashback scenes. Though our own Editor has suggested that the title See How They Run would be ideal for a documentary about when the AnyGoodFilms team all went down with food poisoning from our corner kebab shop this is a briskly entertaining star studded whodunnit.

Watch the See How They Run trailer HERE