We’ve always been curious about certain exotic foods. Frogs legs seems intolerably cruel when this is the only part of the animal used and they remain destined to a life in a wheelchair (Have you been out drinking with the Editor? – Deputy Editor) and don’t even get us started on prawn balls! (‘Stop it!’ – Ed) But shark fin soup is something else altogether and with the animals harvested in utterly barbaric fashion with the super predators caught by fisherman who slice their fins off and throw them back into the sea with the shark now unable to navigate it sinks to the seabed and, in a twist of bitter irony, drowns. It’s a distressing piece of footage watching the shark slowly sink unable to help itself. Sharkwater Extinction seeks to reverse all that.

Shark conservationist Rob Stewart’s groundbreaking documentary bought the practice to the world’s attention and instigated its outlawing almost internationally except that some countries, notably Costa Rica, with a breathtakingly hypocritical president who is revealed here as a bare faced liar, ignored the moratorium continuing to catch a staggering 150 million sharks of which only 80 million can be accounted for. 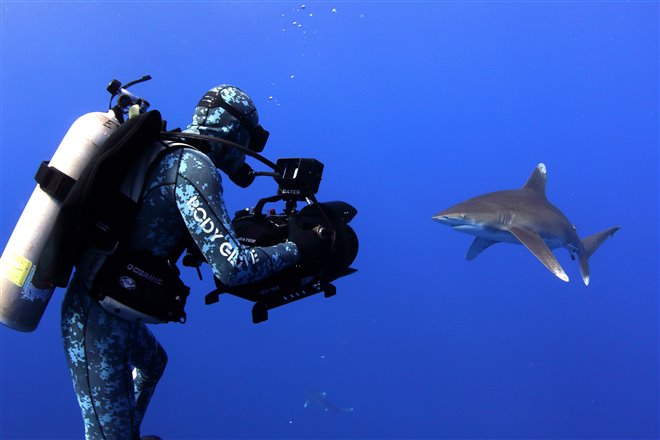 Stewart continues his campaign with almost religious zeal to outlaw the practice and alert the world to the danger of harvesting the seas top of the chain predator which ultimately will impact on human existence.  What he uncovers is astonishing with shark meat found in everything from pet food to cosmetics & fertilizer and even deliberately misleading the public with shops renaming it as rock salmon, a bit like Amanda Holden calling herself an actress.  Finding it on US supermarket fish counters eagerly bought by customers unaware that despite it sounding exotic a sharks level of  toxicity are high with the predator having devoured everything in the food chain below it making a shark like a mobile marine chemical dump or Kurt Cobain’s urine sample.  It’s astonishing what he uncovers with governments in second world countries turning a blind eye to the practice and  fishermen covertly hiding the fins as they dry out before they sell them on at a high price. It’s hardly surprising then that when an American testosterone fuelled shark hunter brags that, ‘if you put a price on it, they become a target’. Unfortunately he’s right. So when Stewart uncovers what looks like a moderate pile of fins they actually find there’s 38,000 there alone and the wholesale slaughter is put into perspective as to the profit that can be made. As he says, ‘It’s disappointing to see’, is probably the film’s most obvious understatement.

Sharkwater Extinction’s claim that the world has been kept in the dark about what’s happening and the scale of it too seems spot on and as a campaigner  he travels all over the world even finding drift nets like an immense wall of death capturing everything in its path on his own door step off the coast of LA. But the tragedy extends to Stewart himself because this became the last documentary  he made with the film building up to what turned out to be his last dive and the  Sharkwater Extinction  becomes as much an ode to his life’s work as it is to raising the awareness of the plight of sharks. Playing like a Part 2 to his 2006 documentary, Sharkwater Extinction is still depressingly essential viewing.