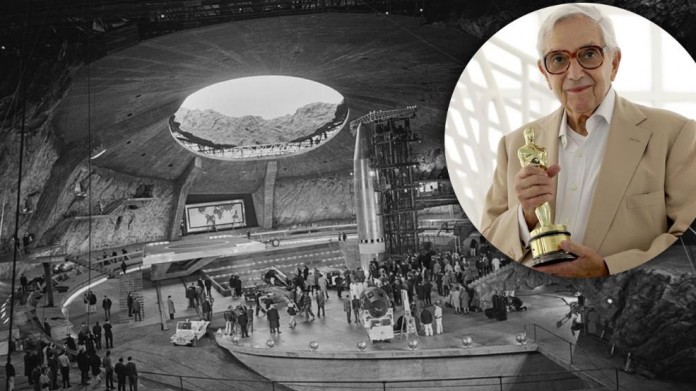 We’ve been a bit remiss in overlooking the recent death of top Production Designer Sir Ken Adam earlier this month. You may not know his name but you’ll know his work notably with Stanley Kubrick (twice) & on eight Bond films.

Sir Ken Adam designed some of the most extraordinary sets in cinema, from the war room in Stanley Kubrick’s Dr Strangelove (1964) to the gigantic volcano of You Only Live Twice (1967), which, at $1m, was the largest and most expensive set ever created at that time.

Born Klaus Hugo Adam in Berlin in 1921, Adam went on to design over 70 films and was Oscar-nominated on five occasions, winning twice for Barry Lyndon and The Madness Of King George. He also won two BAFTAs and received seven nominations.

It’s difficult to encapsulate his work so the following is an extract from FILMCRAFT: Production Design, published by Ilex Press, written by Fionnuala Halligan.

“I knew I had a passion when I started out, but I wasn’t sure whether my passion was more for cinema or theatre. But I found a sort of compromise as a designer, not with the first film I did but as I went along, that instead of reproducing reality I found it more interesting to invent my own type of reality. That was provided I could talk the director into it – which sometimes was quite difficult because, as you know, in film everyone has an ego problem and I came in like a steamroller. But eventually it paid off.

“You see, once I knew the mechanics of designing a decent film, then it became a little boring for me. So I decided to get away from reality – to create an effect which accentuated what the setting had to say.. It really started with Dr Strangelove; years later, when Ronald Reagan became president of the USA he asked his Chief of Staff if could he see the Pentagon War Room, but it didn’t exist, only in the film. I combined a certain amount of theatrical design with real design and I had no reference, it was purely fantasy.

“I remember on the first day I met with Stanley Kubrick, he was talking and I was doodling, scribbling, which is what I liked to do. And I came up with a two-stage or two-level design for the War Room, a little bit like an amphitheatre. And he loved it. So I thought, ‘this is the easiest director I’ve ever worked with! First meeting and he loves my designs’. So I gave them to the art department.

“One day three weeks later he came up to me and said, ‘Ken, gee, what am I going to do with those hundred extras sitting on the second level? I don’t know what they are going to do! I think you’ve got to start again,’ It was quite a shock for me.

“[The final version] took some time because he was standing behind me. And when I came up with that triangular shape he asked me, ‘isn’t the triangle the strongest geometric form?’ I said yes, even though I wasn’t sure, and that sold him. He liked the light frame in the sketch and he decided to light the table with photo floods. So we experimented every evening, standing on chairs, until we got it right. We were very close. But even though we got on well I said to myself after Strangelove that I would never work with him again, such a complicated person.

“And so I got out of doing 2001: A Space Odyssey. But he got me on Barry Lyndon. I didn’t want to do it. He was a very difficult man to work with – extremely talented but on Barry Lyndon I had a sort of nervous breakdown and I said to myself, no film is worth going around the bend for – it’s because we were so close, you know. He was impossible at times and I used to take his guilt onto me, apologizing to actors for something we had done, when I was really apologizing for Stanley. I lost my perspective and so did he. But we remained friends, always.

“He called because he’d seen the sets for Dr No and he loved them, so you could say it all started for me with Dr No and [director] Terence Young . It was the first Bond and it was low-budget stuff and I had nobody who was standing behind me looking over my shoulder – they were all in Jamaica filming.

“I was sitting in Pinewood and I had to fill three stages with sets, so I just went ahead. And they arrived on the Thursday and they had to start filming on the Monday and if they hadn’t liked it, it would have been a disaster. But Terence said he loved it, because nobody had quite done film sets like that before and once I won Terence over, the two producers Cubby [Broccoli] and Harry [Salzman] were on side and then everyone loved it. And that helped me enormously, with my confidence.

“The volcano set for You Only Live Twice was huge. It was the most ambitious interior-exterior set ever built. The dimensions of the volcano were well over 450 feet to the longshot area, which we had tented in, the artificial inclined lake was 120 feet wide, we had a moving heliport flying in actual helicopters, a monorail.

“The only option was to get the best cameraman in the world – and that was Freddie Young [Lawrence Of Arabia] – because nobody else wanted to do it. They told me nobody in the world could light it but Freddie looked at the model and said no problem. He got every what we called brute arc, a gigantic arc, in the country, and from across Europe too. And it took every lamp in Pinewood. But he lit it and he lit it well.

“Today you’d do it with CGI and it’s a very effective way of doing a scene but it changes film-making completely. The danger is that directors go crazy. Instead of when they could not get more than 1,000 extras, now they get 100,000 extras with their CGI but it doesn’t look real, the audience knows it’s phoney. So it’s a fantastic new weapon I would say, but it has got to be treated with caution.