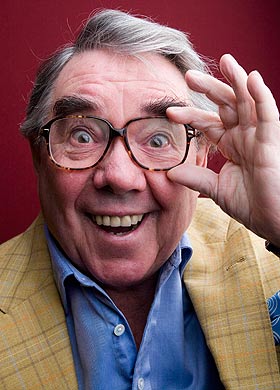 This might seem unusual to have someone best known for his comedy double act but Ronnie Corbett being given a tribute on a film site but he actually started off as something of an all round entertainer and actor having had, if you’ll excuse the pun, small roles in the 1952 film ‘You’re only young twice’ before going on to have equally small roles in long forgotten films such as ‘Fun as St Fanny’s’, ‘Mad little Island’ and the 1967 Bond spoof, ‘Casino Royale’ It was just after this that he started work with David Frost on The Frost Report a seminal stire of the 60’s where he met and teamed up with Ronnie Barker and forged a long term double act and a mainstay of BBC Saturday night TV and the only team who could give Morecambe & Wise a run for their money in terms of viewing figures.

During this time he made only the occasional foray into film with roles in ‘Monsieur Lecoq’, ‘Some will, Some won’t’, ‘The rise and rise of Michael Rimmer’ & ‘No Sex Please we’re British’ in 1973 and being the last film he made before John Cleese’s ‘Fierce Creatures’ in 1997 a less than successful follow up to ‘A Fish called Wanda’.His last feature film was John Landis’ ‘Burke and Hare’ about the famed grave robbers.

Cinema never gave him the roles that did his talents justice unlike the TV series The Two Ronnies which allowed him full rein perhaps none more so than with his comic shaggy dog monologues from an over sized chair which was resurrected by, of all people, Ben Elton on his own TV series some years later as a tribute to Corbett’s talents which were often unfairly overshadowed by his comic partner Barker.

As with David Bowie who passed away earlier this year his best role of recent years was as a cocaine addled version of himself in Ricky Gervais’ ‘Extras’ caught in a toilet cubicle at the BAFTA awards. It was a brave and mischievous role to take at 75 years of old when he filmed the scenes.

We met him many years ago at BBC TV Centre and though by then he was something of a TV comedy legend he was a delight to work with.

He had been ill for some time and had suffered from ill health since 2014 and he died with his family around him.