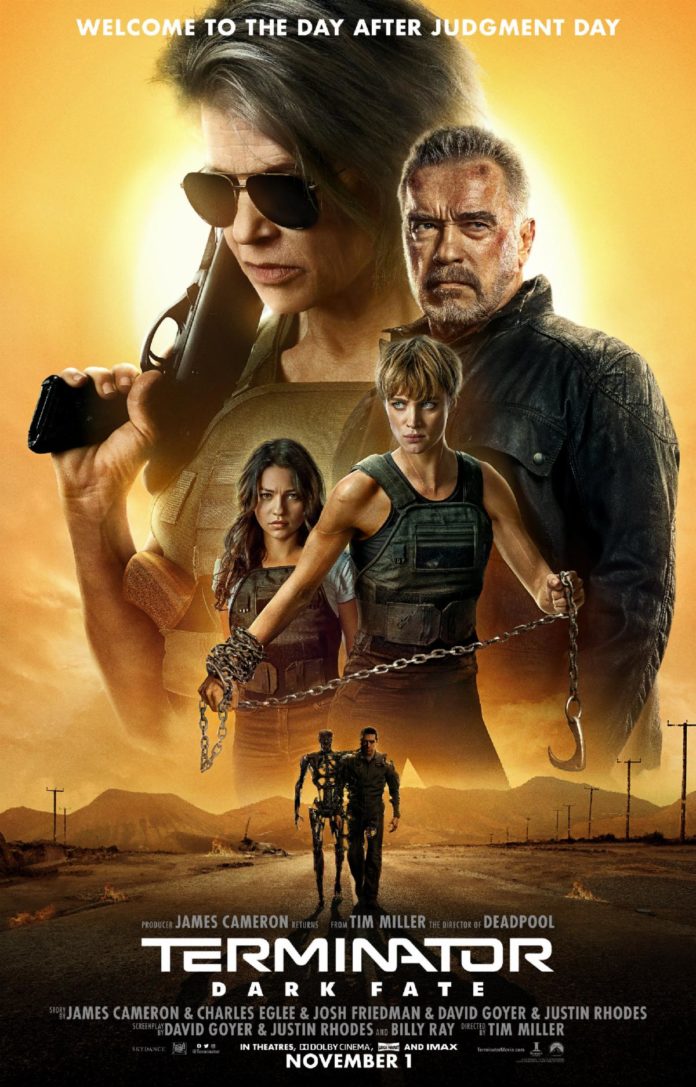 Regular readers of AnyGoodFilms will be more than familiar with our contempt for the Z-list dead heads and oxygen thieves who pass for alleged celebrities these days and we only wish that James Cameron would send his Terminator back to the origins of reality TV. Instead Terminator Dark Fate or T6 or actually T3 in this case as the latest film ignores all the increasingly poor sequels that followed after Terminator 2 rightfully confining them to the cinematic garbage compacter.

Terminator Dark Fate picks up with Linda Hamilton returning to her strong woman role, Sarah Connor, still with her son John after the traumatic events of the 1992 film relaxing at a beach bar seemingly content and safe until the film gives us an unexpected twist. It’s become a problem for the franchise with few if any twists and the one that they did have for T5 was ruined in a disastrous marketing trailer that gave the game away.

So here we have a new batch of characters the first of which is introduced in the now obligatory electro bubble popping up at the most inopportune place and it’s here that we meet Grace (Mackenzie Davis) and shortly after Rev-9 (Gabriel Luna). It’s Good Guy Grace and Rev-9 who are the next stage in Terminator technology. After the T-1000 Gabriel Luna’s Rev-9 has a lot to live up to and here it’s an endoskeleton in bad ass black chrome that’s hidden under a liquid metal skin and had the ability to separate into two entities and hence is twice the danger for anyone in its sights and in this case it is Dani (Natalia Reyes) a young Mexican car assembly worker. Helming Terminator Dark Fate is director Tim Miller who proved his appetite for destruction with Deadpool and here he wastes no time plunging headlong into car chase carnage and it’s the reappearance of Sarah Connor who reappears presumably relieved that she not in T4 or especially T5. In what is her third film as the character she is embittered with a cynical world view and is a lifetime away from the first film and it shows because time has not been kind to the actress at least not if this is anything to go by and she’s less than sympathetically lit with every wrinkle apparent. Terminator Dark Fate is typically Cameron in so far as the story returning to strong female leads in keeping with the #TimesUp movement which in fairness he was already well ahead of the curve and here Mackenzie Davis plays an ‘augmented’ human back from the future to save Dani the reason for which is not revealed until later in the film though it’s not difficult to work out why.

In many ways Terminator Dark Fate follows the T2 template closely and like that it is ultimately a chase movie  with them having to face off against their nemesis and its part of the puzzle as to how they will destroy this current incarnation of a terminator. Of course the franchise is built around the iconic presence of Arnie and its a credit to the pace of the film that it maintains enough momentum to keep your mind off him until he finally appears in the third act. His Terminator as hinted at in T2 has assimilated more human emotion in a somewhat unexpected manner though it manages to resist the laughs he got in T3 and there’s even a brief moment where the film knowingly acknowledges but resists the shades wearing iconography.

So after the disappointment and potential franchise ending catastrophe that was T5 is this reboot any good? Cameron’s T2  set the bar almost impossibly high for action films with its relentless pace, astonishing set pieces and ground breaking effects that serviced the story so brilliantly and even today T2 is still better than many films that have followed.  Terminator Dark Fate sticks to that template and there are several nods to it with similar set pieces and even Arnie’s obligatory catchphrase has a new spin on its well worn familiarity. The film has rightly relocated itself back to a contemporary setting and there are several well staged action sequences. Gabriel Luna’s Rev-9 with its dual terminator capability is intriguing but isn’t as mesmerisingly evil as Robert Patrick’s T-1000 turn. Davis and Hamilton are very good and Arnie’s T-800 doesn’t disappoint but Terminator Dark Fate whilst not attaining the dizzy thrills of T2 is a welcome return to form and should ensure a new trilogy.

Here’s a close up of the T-800 skeleton from the London crew visit: