Extremely Wicked Shockingly Evil and Vile despite being the headmasters comment on Amanda Holden’s school report was also a notable comment in the judges summing up in the case of  Ted Bundy probably America’s most notorious serial killer. Director Joe Berlinger has made something of a career of documentaries about notorious murders and  his recent 4 part series ‘Conversations with a Killer’ featured interviews with Ted Bundy in prison before he was finally executed. 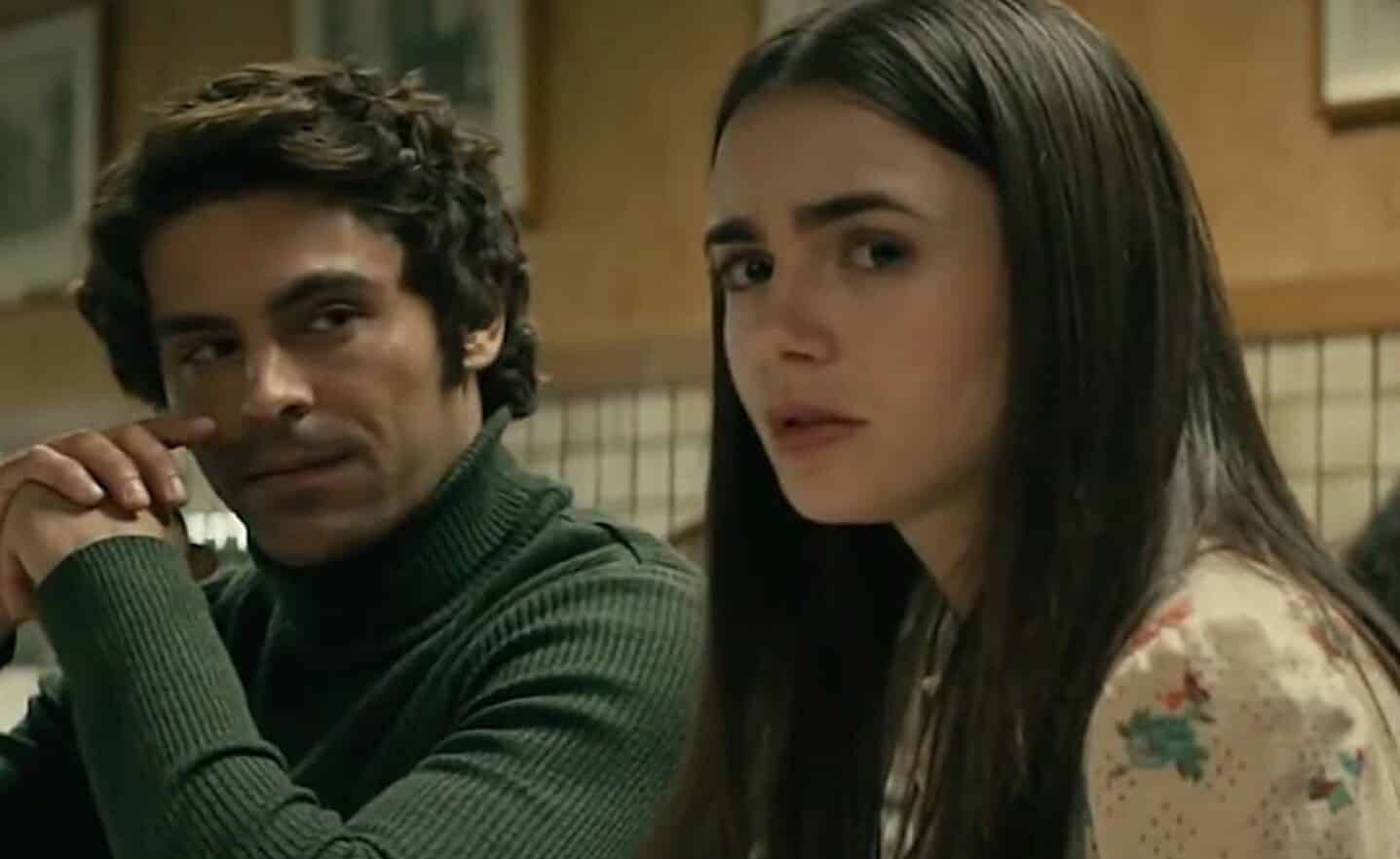 It’s no secret how this ended up and the film cleverly cuts between his girlfriend Liz Kendall (Lily Collins) on whose book this film is based as she visits him in jail and how they first met at a student bar. At the time she was single mother with a young child and his good looks and easy charm made him quite a catch and she welcomes him into her home where they live together. Yet it’s from here, right under her nose, that he went out at night in his VW beetle and carried out a string of brutal murders of young women, 30 at the last count although it’s thought that there were many more.

Kendall’s book, ‘The Phantom Prince : My Life with Ted Bundy’ looks at just how he managed to pull the wool over so many people’s eyes and the film sets out to tell the story from her point of view but this falls away half way through in favour of the court case with only cursory scenes of her drowning her sorrows in drink whilst a colleague uses Bundy’s incarceration to wiggle his way into her affections whilst at the same time Bundy is banged up, an ex-girlfriend Carole Anne Boone (Kaya Scoldelario) gets banged by him in the courtroom corridor and ends up fathering his child.

Being famous seems to be the only desire of social influencers, the scourge of modern day media, and apart from appearing on reality TV shows its seems that the only other path to fame for these witless wonders is becoming a serial killer. It’s depressing to see that even then as Bundy’s case was televised it attracted groupies to the courtroom so as to be within touching distance of the handsome hunk.

Bundy was a charismatic, urbane and charming killer and it’s to that end that Zac Efron is ideally cast protesting his innocence to the very end until a scene reveals that it was Kendall who had finally seen through the facade of the sociopath. A serial killer film inevitably can’t avoid borrowing from the grand daddy of them all, ‘Silence of the Lambs’ notably at the end with Bundy looking directly to camera as the judge sums up but that’s as close as you’ll get to the serial killer thriller. Those expecting a gore fest will be disappointed as none of the murders are shown though they are reported in the courtroom in disturbing detail. Instead Extremely Wicked Shockingly Evil and Vile focusses more on the court case where having persuaded Kendall for years to believe his innocence he proceeds to delude himself that as a law student he can defend himself and harm the court to find him innocent.  It’s a mark of his own staggering arrogance that he believed he could be found innocent and uses the court room for showboating to a judge played as an iron fist in a glove by John Malkovich and a methodical prosecuting lawyer played by Jim Parson not quite shaking his Big Bang Theory persona. The story of Bundy’s serial killing is an incredible one in that it went on for so long without being caught and was likely to have continued if it had not been for Kendall and in many ways it’s like the arrest of Yorkshire Ripper that it was purely an accident that he was found. It’s a good performance from Efron who proves that once away from dreck like the recent Baywatch movie he’s a decent actor.