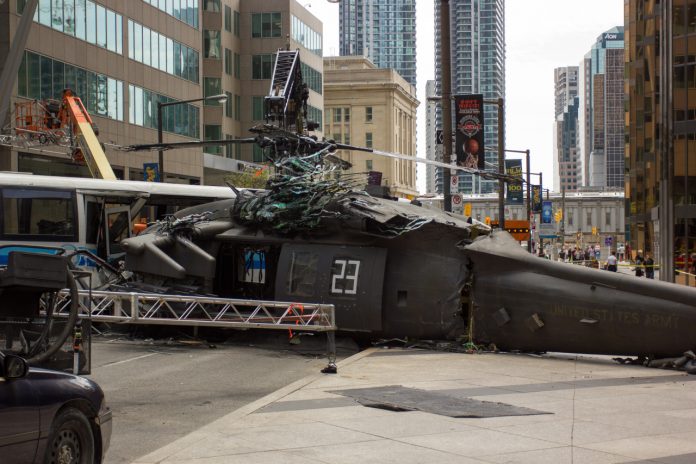 One of the many questions we’ve never been asked is, ‘Where was Suicide Squad shot?’ The answer is mainly on sound stages at Pinewood Toronto Studios in Ontario, Canada and was chosen as a filming location in part due to the facilities at Pinewood Studios and the ability to look like a nondescript major metropolitan city with the ability to conduct a lot of road closures for action sequences,” says Scott Alexander, key assistant location manager on the film.

The film has some huge sequences notably a battle in the fictional Midway City and the film used Pinewood as a base using the facility’s 46,000 sq ft ‘mega stage’, a space that will soon be home to the new Star trek TV series. Here the production built a high-security prison, and a 250-foot-long city street was designed and built for many of the film’s bigger action set pieces, complete with a complex overhead flying system to accommodate aerial stunt work. After this the film went on location in the streets of Toronto to film the major car chase set piece.“We shut down six blocks of Yonge Street – the main commercial street in the city – for multiple nights for car chases,” says Marty Dejczak, the film’s location manager.

”Another few blocks were shut down to install a plane crash,” he continued. “A section of the Lakeshore Boulevard Highway was closed for a couple of helicopter crashes. In all these locations major set decorating was done to store fronts and roadways. All street and highway signs were changed out and street lighting in certain sections was changed, enhanced or turned off.

Roads were closed from 7pm to 6am and as soon as this started the film took over with action vehicles, stunt rigging and set dressing and set it up only to start cleaning it up at 5am to have the roads open at 6am for the rush hour.  It involved dozens of police officers and traffic control companies.

After the  huge success of Marvel Studios cinematic universe Warners are using DC’s characters in the hope of emulating their blockbusters and Warner Bros filmed Batman v Superman in Michigan, but relocated to the UK for follow-up movies Wonder Woman and Justice League, and is likely to remain near London for The Flash.

As with all big-budget productions the studios are driven by the availability of generous filming incentives, world-class studio facilities and experienced crews and London and Toronto are two cities that offer just that.