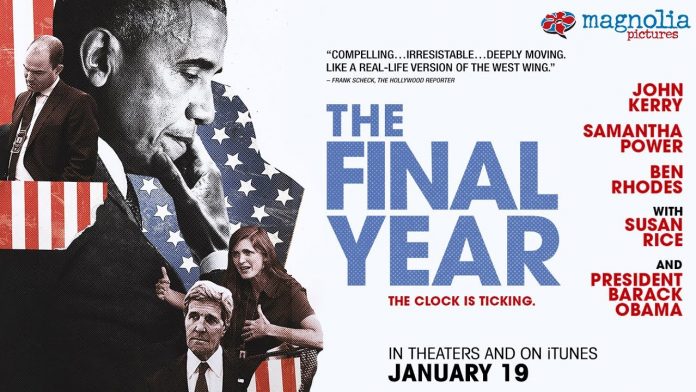 In politics there’s a generally held consensus that a government has, at most, three terms to make a difference. The 1st term is spent upending the previous administrations policies, the 2nd term implementing their own policies and the 3rd is when arrogance and complacency sets in and that’s when the wheels fall off.  In the US the same President only gets two terms to stay in that role so right from the start the clock is ticking to leave a lasting legacy yet like so many before it’s the final year where everything seems to be left to be hastily completed and the HBO documentary about Barack Obama shows the urgency to get things done before he leaves. To that end the film focuses on finalising his climate and foreign policies with Vice President John Kerry ironically jetting round the world in a far from eco-friendly plane whilst pushing climate policy but the documentary focuses mainly on National Security Advisor Samantha Power and  speech writer Ben Rhodes  as they focus on foreign policy .

Given unprecedented behind the scenes access what the film makers capture is a sense that Obama has left it too late, ignoring the looming shadow of Donald Trump and it’s their dismissal of him, enthralled by his twitter feed than addressing his threat to the democrats that in retrospect shows they took their eye off the ball. With the Democrats attention more on threats abroad than threats at home, Trump harnesses it to his own advantage and sells to a home electorate all summed up at the presumptious celebratory party where Democrat supporters watch the TV in horror as they see the expected win slip away from their grasp.

The Final Year focusses primarily on the Islamic Boka Haram and the kidnap of 200 school girls but also pays a brief nod to the Syrian uprising. Whilst the opening up of Cuba to trade was a success and the Iran nuclear deal continues to be contentious it’s generally regarded that Obama’s foreign policy was disastrous. Syria was fudged letting Russia have the US over a barrel (bomb), North Korea, like so many previous administrations over the decades, was just a can that was kicked further down the road for someone else to deal with and Boka Haram, as awful as it undoubtedly was for the parents of the kidnapped children, was never dealt with properly with the security advisor Samantha Power just spouting embarrassing platitudes. The documentary is keen to point out that the advisor was a working mother herself but despite her obvious empathy for the parents she was pitifully inept and woefully out of her depth in dealing with the situation, unable to bring any resolution to the matter.

Speech writer Ben Rhodes serves up the most insightful comment into all the proceedings with USA’s dealing with Putin saying, ‘it took years to evaluate what Putin was about’ and in the mean time he rang rings round the US. It’s a suitable indictment of the administration which despite ObamaCare the campaigning motto, ‘Yes we can’ ultimately turned out to be, ‘No we couldn’t’.