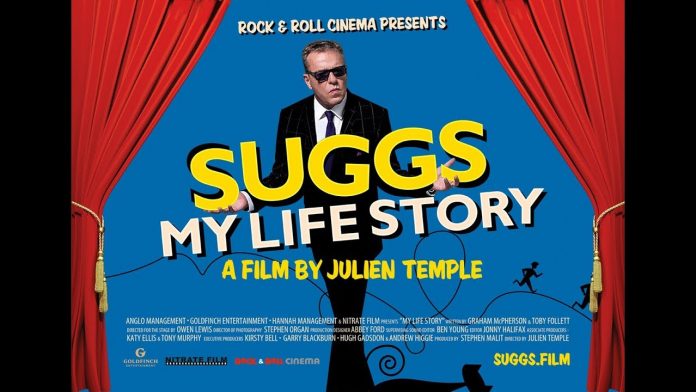 Pop stars life stories have some pretty extraordinary episodes and we’re still wondering why there’s never been a film about Keith Moon the drummer with The Who whose drug fuelled excess was the stuff of legend : blowing up hotel toilets, throwing TV sets out of windows  and destroying his own drum kit on stage.  Suggs the lead singer of 80’s group Madness hasn’t quite led such a life made clear by the opening of ‘Suggs: My Life Story’ when he mourns the death of his cat and uses it as a springboard for a reappraisal of his life.

Along with six of his mates from North London Madness were undoubtedly one of the most entertaining and beloved groups of the Eighties never taking themselves seriously but at the same time churning out great songs with ramshackle laugh out loud videos until they all got bored with it and called it a day.

Based on the short lived but popular stage play this is essentially a filmed version of that same play with a surprisingly sweary Suggs holding court to an audience of fans who seem to be hanging on his every word and unable to contain their laughter at many of the weak jokes. Albeit except for one young woman who director Julian Temple can’t resist cutting to as she sits stony faced seemingly oblivious to Suggs anecdotes.  It’s odd but perhaps is a deliberately self deprecating thing to include though many of Suggs anecdotes are like that. Temple is ideally suited to direct with his back catalogue of films (Sex Pistols’ The Great Rock & Roll Swindle ), documentaries (Rolling Stones’ At the Max) to a huge array of  videos that have included David Bowie, Culture Club, Neil Young, Tom Petty, Blur and even S Club 7.

For fans of the group there’s a wealth of stories here about the band that include how Suggs whose real name is the distinctly un-Rock n Roll Graham McPherson got his nickname to how he accidently found out about the death of his long absent father.

Interspersed with moments away from the stage to illustrate various moments in his life story the film is still firmly rooted in its theatrical origins and the film is the result of several shows recorded at Shepherds Bush Empire and Hoxton Hall cut together and the film ends with the bands brilliant and iconic performance atop Buckingham Palace for the Queen’s Golden Jubilee party – pity they never had any footage of her Majesty doing that Madness jive with the rest of the Royals.

For fans the best moments are some rare unseen footage of the band in the early days who frequently reform always to huge audiences as seen at the first MADstock where audiences went berserk and their pogo-ing caused a tremor.   At times a little bit slow but this is more for the fans that anyone new to the band and their music where this doesn’t quite capture the appeal of the band in their heyday.

Actor Sean Connor talks about the making of ‘Schemers’……