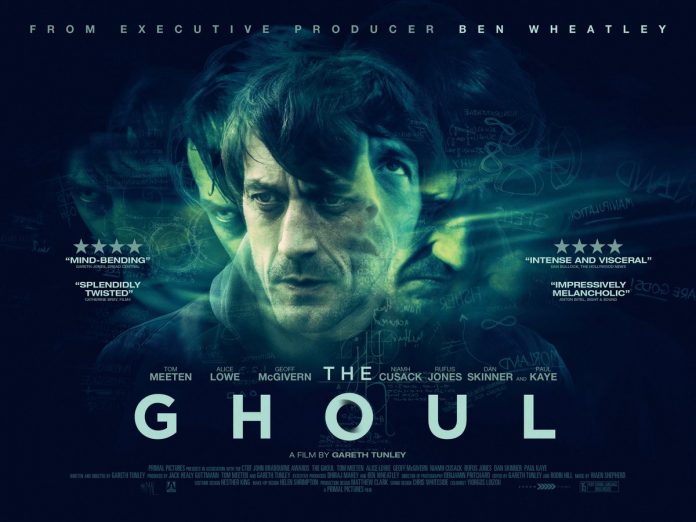 Christopher Nolan’s film ‘Following’  was a great little debut sowing seeds of what was to come later in his career and in that respect Gareth Tunley’s is similar in intent. Like ‘Following’ it also plays with narrative structure starting with two detectives (Tom Meeten & Rufus Jones) at a murder scene long after the bodies have been removed where some clunky exposition explains how a double murder occurred there. As part of the investigation Meeten as Chris, (we never get to know his full name), goes undercover convinced that a psychotherapist is somehow involved in the double murder. Meeten’s moody, miserablist cop is the ghoul and it’s the sort of role that might be juicy for an actor but watching him grappling with depression as it takes over to the degree that it does here but it takes some concentration on the audiences part as we see him blur the line between fantasy and fact which affects his investigation irrevocably.

Tunley’s script at times is a little too clever and makes much about a ‘mind loop’  being mirrored by a script looping back on itself some of which works admirably. The Ghoul, though low budget has occasional flashes of brilliance, (a car crash is well put together for a film with no money)  and the film benefits greatly from Geoffrey McGivern as the psychiatrist who may or may not be involved and contrasts sharply with Meetons moody and at times slightly dull and irritating patient /investigator. There’s decent support too from Alice Lowe (looking like Dr Who’s 70’s sidekick Elizabeth Sladen) and a cameo from the always watchable Paul Kaye albeit saddled with a dull drug story that feels like it not going anywhere.

Tunley had worked on some of Ben Wheatley’s  previous films and his influence has rubbed off on him as seen here as this is the sort of film that benefits from repeated viewings which it may not get with such a moribund central character.