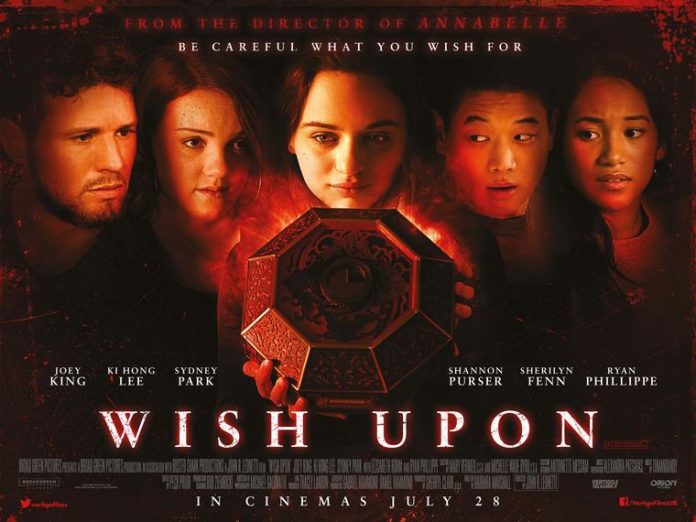 With the Summer truly here it’s time for the teen horror summer film and to fill that void we have ‘Wish Upon’ a tale of a teenage girl Clare, likeably played by Joey King, who as a child witnesses the suicide of her artist mother leaving her widowed father to raise her on his own. Times are tough and as she is in high school that naturally awkward time when parents are an embarrassment whatever they do as far as their offspring are concerned. Her social standing in school leaves her with few close friends and like any teenager just wants to be popular like the attractive but bitchy princess that you know is going to a sticky end at some point.

What perhaps accentuates her embarrassment is that her father scrabbles around in skips looking for items to recycle and it’s in this capacity that he comes across an ornate looking yet unknown to him satanically possessed jewellery box and takes it home for his daughter. After all what child doesn’t like a gift fresh out of a stinking skip. So it’s after a bad day at school that she wishes something bad to happen to the bitchy school princess only to find that it does. And so what follows is a series of, not quite gruesome enough for a horror film, deaths which she and her friends trace back to the jewellery box. Uncovering its history Clare finds that she has seven wishes before her soul belongs to the demon in the box and that she’s unable to throw the box away lest bad things happen to her.

Directed by John Leonetti ,who has worked on his fair share of horror as a cinematographer including those of maestro James Wan, this is  directed in a pedestrian manner with few flashes of originality though some of the deaths do make a nod to the inventiveness of those seen in the ‘Final Destination’ films though nowhere near as entertaining.  Joey King is decent enough in the lead role though her Dad looks more like her older brother and his fixation with saxophone and Kenny G is probably more of an embarrassment than him looting skips full of shite.

If there’s any moral to the tale then it’s be careful what you wish for. Our wish was that it was better but the ending makes clear this is an intended franchise.