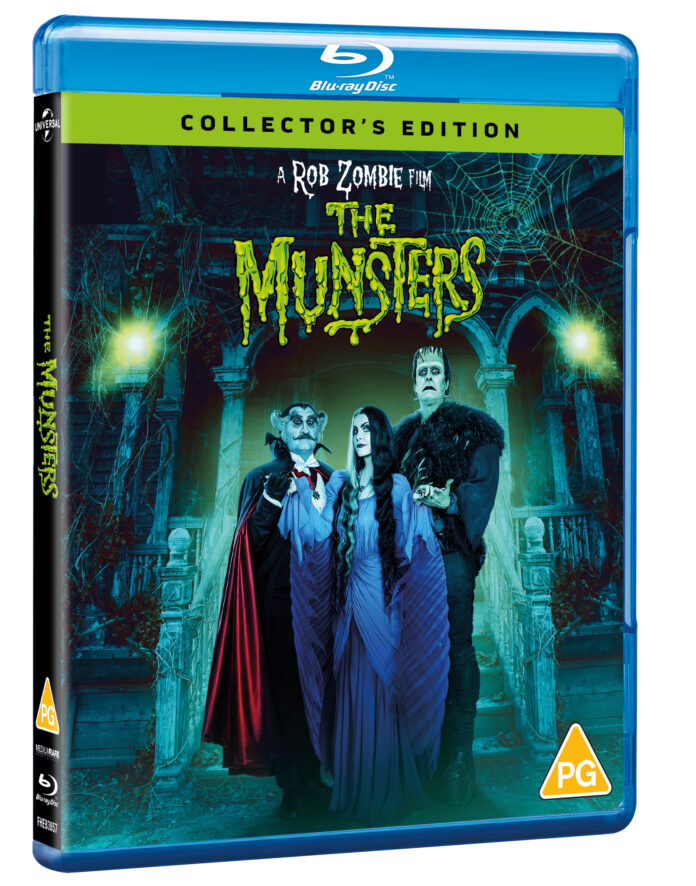 That Rob Zombie is the ex-lead singer of heavy metal band White Zombie and has gone on to direct remakes of Halloween and Halloween II would seem to make him a highly unlikely candidate to write and direct a feature film of the beloved TV series The Munsters and yet that’s exactly what he has done in what was a project he had trying to get off the starting blocks for years as it was a childhood favourite TV show of his.

Originally a TV series The Munsters aired in 1964 and ran for 70 episodes featuring a family of friendly monsters led by Fred Gwynne as Herman Munster and Yvonne de Carlo as his vampire wife Lily.  Joining them were Al Lewis as Grandpa and Butch Patrick as their werewolf son Eddie with the cast rounded off by Beverley Owen as their pretty niece, Marilyn. The series was very popular having been inspired by the success of The Addams Family but lasted only until 1966 when viewing figures dropped partly due to the new Batman TV series – the Bam! Pow! camp pop art version – but it later found a new audience through syndication.

Rob Zombie writes and directs with a cast that includes his wife Sheri Moon as Lily, Jeff Daniel Phillips (Herman) with a few surprise roles notably form our own Sylvester McCoy as Igor and cameos for Elvira herself Cassandra Peterson.

We talk predators with the Amber Midthunder the star of ‘Prey’

This feature length version of The Munsters is something of an origin story with Lily just your typical 150-year-old, lovelorn vampire looking for the man of her nightmares . . . that is until she lays eyes on Herman, a seven-foot-tall, green experiment with a heart of gold. It’s love at first shock as these two ghouls fall fangs over feet in a Transylvanian romance. Unfortunately, it’s not all smooth sailing in the cemetery as Lily’s father The Count has other plans for his beloved daughter’s future, and they don’t involve her bumbling beau Herman.

Fans of the series will perhaps be up in arms about several elements most notably the film being shot in colour whereas the TV series was in black & white but the studio opposed Zombie’s desire to keep it like that and he veered instead into  bright day-glo colours to somewhat jarring effect giving the film something of a cartoonish look which maybe appeals to a younger audience.  The series was always goofy and filled with groan inducing jokes but the script here is laboured with the sort of dad jokes that even dad’s might draw the line at and running at almost 2 hours it is far too long and would have been a far better feature at half the length.

Nick Stahl talks the horror of his new film, ‘What Josiah Saw’

There are a number of decent extras on this disc and are in fairness very good, in fact arguably better than the feature film itself and include: