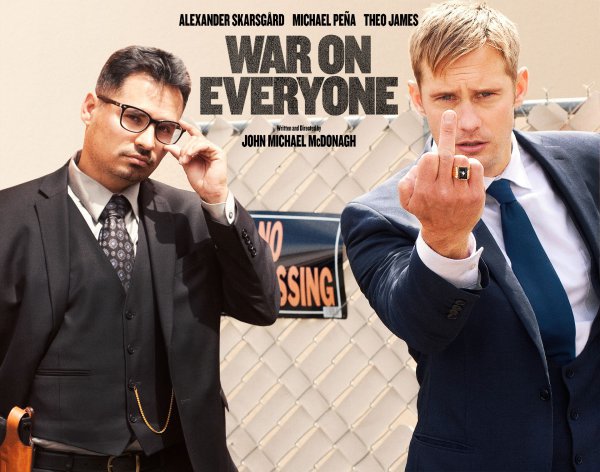 Crazy comb over-ed, Presidential prat Donald Trump and this week’s new release ‘War on Everyone’ have much in common as both are politically incorrect the difference being that only one of them is knowingly and intentionally so.

Director John Michael McDonagh’s previous films have included ‘Calvary’ and ‘The Guard’ both very good films and here he turns to the buddy cop movie with actors Michael Pena and Alexander Skarsgard relishing their roles as a bad cop/bad cop pairing with both already having been forced to reconsider their unorthodox attitude to policing but having pondered over their actions have clearly decided that their methods are perfectly acceptable which included mowing down a mime artist in their car to see if they can make him speak. It’s scenes like this that set the tone for the rest of the film and peppers the script throughout and makes it so joyously revel in its own inappropriateness.

With a plot that owes much to 70’s noir the corrupt cops set out to intimidate a particularly smooth and dapper gang boss,  Lord James Mangan played by Theo James, and his sidekick, a queasily camp loon who looks like a distant relation of the psycho in ‘Dirty Harry’. It’s this sidekick who takes some merciless beatings and the film takes a sadistic pleasure in the pair tormenting him to an unpleasant degree which makes uneasy viewing. But despite its contemporary setting  it’s an updating of early 70’s films and in that respect is similar to the recent release ’The Nice Guys’ written by Shane Black who himself is a big fan of those rough and ready detective films and the dialogue here owes much to his wilfully jokey style.

With Skarsgard as the hard drinking, Glen Campbell music fan Monroe and Michael Pena as the Mexican family man, Bolano,  still living like a teenager they make an unlikely pairing in a modern police drama who would have lost their jobs long ago and it’s where the film abandons any credibility.

A litany of wilfully abusive but funny lines fired at all sections of society including an especially good self referential joke about the films use of coincidence to further the plot McDonagh has  constructed a masterpiece in political incorrectness .