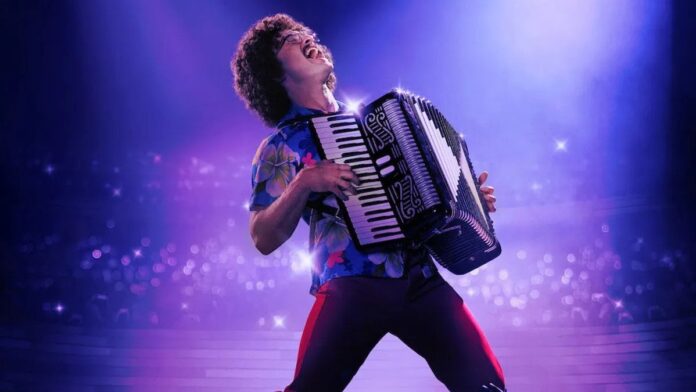 The parody song has nearly always been a bit lame perhaps most notably practised in the UK by The Barron Knights who always looked a little too pleased at the cleverness of their own songs. Weird Al Yankovic was a different matter. A bespectacled, bubble haired moustachioed accordion player he was an unlikely musician popstar and yet many of his parodies of popular hits border on genius all of which having maintained a successful career for decades. So in an era when we’ve had a glut of pop star biopics perhaps its Al’s turn but unlike those other biopics purporting to be warts and all insights Weird The Al Jankovic Story is about as accurate as a restaurant bill having been divided up into equal shares by Liz Truss as she’s persuaded the others that’s she’s great at maths.

What was revealed at the Harty Potter 20th anniversary reunion

Like his parody songs everything here is pastiche right from the start with Al’s voiceover, his battle with a tough father vehemently opposed to his son learning the accordion or the ‘Devils Squeezebox’ as he calls it in much the same way as Amanda Holden must surely refer to her Spanx, and gets ever more surreal with a search and destroy mission against Pablo Escobar. Those looking for an insight into the pain and art of Al will not find it here. What will be found is some very funny laugh out loud moments – no one recognising Queen’s John Deacon and Michael Jackson stealing Al’s tune for ’Eat It’ to make his own hit record, ‘Beat It’!

Noel Gallagher interviewed at the World Premiere of Knebworth 96 documentary

Daniel Radcliffe plays Al Yankovic with gusto clearly revelling in the role and whilst he facially is identical to Al, Radcliffe’s shredded torso is a world away from the Al’s . In fact so ripped is Radcliffe that it can’t be long before we see him in an action film soon. In support there’s Rachel Evan Wood as an 80’s era Madonna, Rainn Wilson as Dr Dementor who ‘discovered’ Al and the real Al Yankovic himself gets a cameo as a record boss in an enjoyably self-reverential scene where he berates Radcliffe’s version of himself as a talentless musician who will never make it. And added to this is a long list of eclectic look-a-likes that takes in Salvador Dali, Hulk Hogan and Pee Wee Herman.

Weird  The Al Jankovic Story is  a breezy bit of Friday night entertainment which sags a little half way but is a reminder that his parodies,  along with the pitch perfect videos that accompanied them, are far, far better than many films.

Weird: The Al Yankovic Story’ will stream on The Roku Channel from 4 November