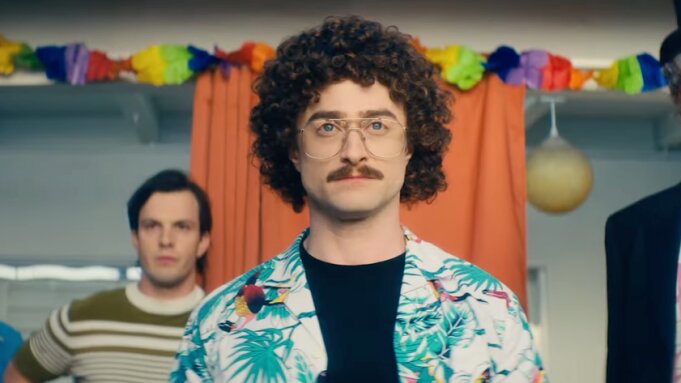 A little while ago we ran a story HERE about the unexpected casting of Daniel Radcliffe as Weird Al Yankovic and now we have a first look with the release of ‘Weird The Al Yankovic story’ trailer.

The film about the parody artist is coming to the Roku platform’s free streaming channel this Autumn.  With a synopsis that reads “the untold true story” of Yankovic, following his  rise to fame with early hits like “Eat It” and “Like a Surgeon” — and not forgetting every one of his “torrid celebrity love affairs and famously depraved lifestyle.” ….obviously this is going to be far more of a scripted mockumentary that will send up the standard tropes seen in many of these self obsessed vanity project biopics.

The film also stars Evan Rachel Wood as Madonna; Rainn Wilson as radio broadcaster Dr. Demento; and Julianne Nicholson and Toby Huss as Yankovic’s parents, Mary and Nick. “When my last movie, ‘UHF,’ came out in 1989, I made a solemn vow to my fans that I would release a major motion picture every 33 years, like clockwork,” Yankovic said in a statement when the project was first announced. That time is now!