Robert Zemeckis’ new film features a town so small that its Welcome to Marwen and You are leaving Marwen signs are on the same signpost.  In fairness it’s because that Marwen is a WWII toy village built by Mark Hogancamp (Steve Carell) a man who was brutally assaulted outside a bar by five men who are now imprisoned. Hogancamp was a gifted illustrator but the attack he sustained was so brutal that it robbed him of that ability and instead as an outlet for his creativity, but more importantly as a means of therapy, he now dresses and photographs dolls in their World War II setting.

From the opening moments we‘re thrown into the thick of the doll’s story where Cap’n Hogie battles Nazis aided by five beautiful resistance fighter women. These animated sequences are what make Welcome to Marwen so distinctive and are at times more entertaining than the film that it cleverly  segues back to where, for Hogancamp, the dolls are representative of real people to him. He is Cap’n Hogie, the Nazis are the five men who brutalized him and the women are those who are helping him in his everyday life. 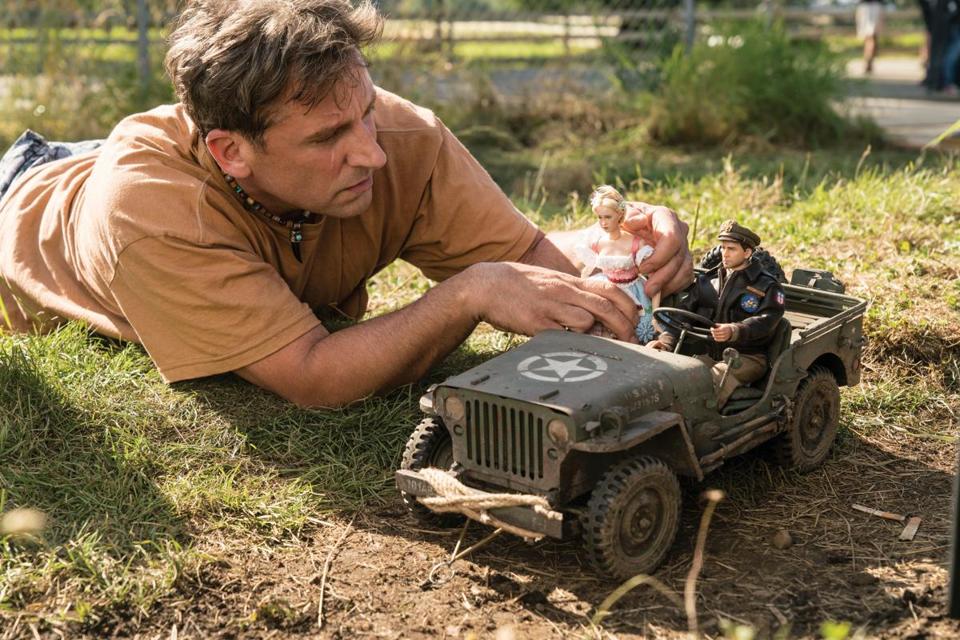 Based on the true life story of Mark Hogancamp this is another remake by director Zemeckis (Allied) this time based on the documentary ‘Marwencol’ about the artist’s real life but this time with state of the art effects for the doll sequences. Initially the back story is only fleetingly revealed and it opens out when new neighbour Nicol (Leslie Mann)moves in across the road from him  (albeit the road only seems to have two houses in it) that he starts to misinterpret her friendship in a painfully awkward scene as he tells her of his feelings. His grasp on reality is dealt a further blow when his lawyer encourages him to attend court to read out his victim impact statement to the judge when it comes to sentencing the five men.

Though these prisoners can rightly never be emphasized with the reason for their assault on Hogancamp is kept low key but when it is revealed is a red rag to red neck numpties like them.  Whilst it’s an interesting story  and what Hoganamp suffered is truly appalling his transfer of real women onto the dolls who are all quite sexualized as being busty, leggy and in some cases wearing fishnet stockings making him out to be someone who objectifies women puts sympathy towards him on shaky ground. Although quite what can happen between his Cap’n Hogay and these other  dolls who are all plastic, botoxed faced, genital free vacuous mannequins begs the question as to how Amanda Holden has ever managed  to have children.

Steve Carell, as he has proved so often with The Big Short and Foxcatcher is a great straight actor and he is good here but the film is too long and takes its time revealing the back story. Add to this one of the doll characters, Deja Toris, a sort of bad doll nemesis to his doll that’s never really clearly defined enough and the film becomes an uneasy mismatch of styles.

Zemeckis has always had a keen command of effects in his films and Welcome to Marwen is no different here and the doll scenes are very good and very entertaining. Unfortunately this is yet another remake of a documentary which he has done previously with The Wire a dramatize version of Man on a Wire which whist it used 3D brilliantly was a film that didn’t really need making. It’s the same here.

Here’s the trailer for Welcome to Marwen…….