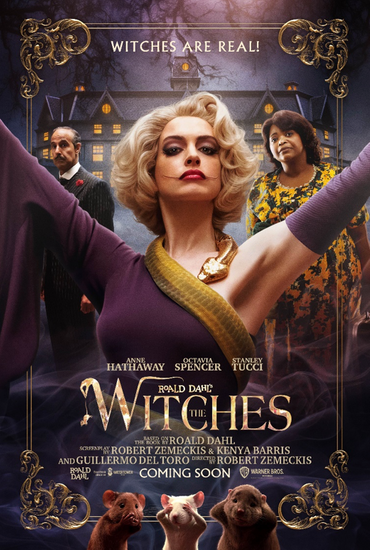 Roald Dahl still remains the premiere children’s writer long after his death and its hardly surprising that his books are adapted for film or remade as is the case with this version of the 1990 film of The Witches directed by the late Nicolas Roeg of all people. Remake, reboot, reimaging ? who knows what the difference is but there’s little different in terms of story from the 1990 version except transposing its location to the US in 1968 where we first come across with Charlie (Jahzie Bruno) cast as the young boy whose parents are killed in a car crash, a typically Dahl moment where he happily will remind kids of the potential fleeting nature of life. It’s Charlie’s Grandma (Octavia Spencer) who tragically lost her own childhood friend, that takes him under her arm trying her best to shake him out of his own shock at now being an orphan.

But it’s an encounter in a shop that alerts Grandma to the presence of a witch in the town and having had a traumatic encounter with one as a child and not wanting to lose her grandson (‘witches only prey on the poor’ she tells Charlie) she takes up an offer to stay at a luxury hotel by the seaside run by a smarmy manager (Stanley Tucci in a not wholly convincing balding skull cap) with little time for them and delivers one of the scripts occasional jibes at 60’s racism.

Unfortunately for the pair of them there’s a society ladies charity fund raising event for the prevention of cruelty to children being held there which ironically is a front for a coven of witches , a hoard of  horrific harridans and cackling crones the last of which we saw on the panel of ‘Loose Women’. Led by the Grand High Witch played by Anne Hathaway they disguise their bald heads with wigs and their claws with gloves and Hathaway’s High Witch is able to fly or at least hover and has a strength that allows her to hurl heavy furniture around. With a deep hatred for children the witches are able to sniff them out in order to turn them into mice but it’s a fate that befalls Charlie as well as a Billy Bunter type boy he befriends and rescues.  So it’s boys who are now mice along with Grandma who have to defeat the witches plot involving a secret potion to run the worlds kids into mice – a daft thing to do as its made clear that the witches all terrified of mice! 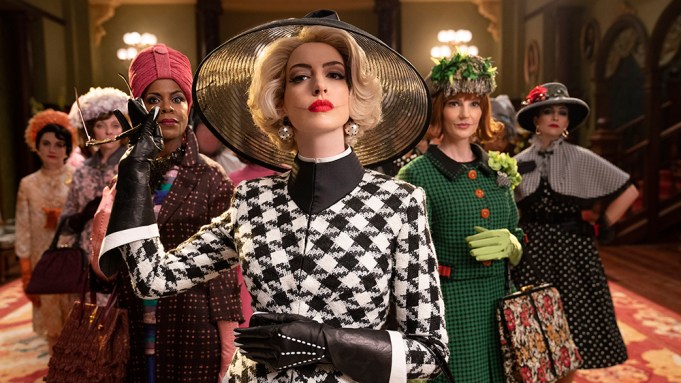 Hathaway as a dramatic actress has nearly always turned in good performances even in slightly underwritten roles such as the wife she played in the recent ‘Dark Waters‘.  Now Johnny Depp went through a phase , usually granted by Tim Burton directed films where he couldn’t resist prising open the dressing up box and Anne Hathaway is the vocal equivalent as seen best (or worst ) in ‘The Hustle‘ (another remake) plundering every accent she could get away with and The Witches has her having a go at Russian (or at least it starts off there) rolling her R’s an  replacing every word that starts with W with a V and it grows increasingly irksome as she ramps ups up the hysteria when the mice and Grandma thwart the covens plans.  Like the first film it’s the scene where the women discard their disguises revealing the witches true identity underneath in a moment not dissimilar to the Britain’s Got Talent dressing when Amanda Holden has finished recording the show. But whereas the 1990 film used prosthetic make up to horrifying effect this version has Hathaway sports a lipstick laden Joker inspired grin with a CGI enhanced grin that threatens to split her head apart whenever she speaks. It’s a strained, strident performance that contrasts sharply with Octavia Spencer’s calm and comforting Grandma.

Directed by Robert Zemeckis and co-scripted by Guillermo Del Toro this is as proficiently made as you might expect with CGI effects replacing the practical effects of the first film which lent it so much if its charm as well as Anjelica Huston’s demonic High Witch but ultimately it is a ki friendly remake for a new generation not familiar with the, in all honesty, more frightening original.