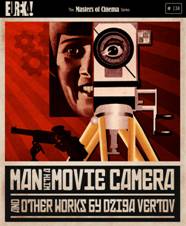 It wouldn’t be untrue to say that the only culture in the AnyGoodFilms? office is that found growing at the bottom of the pile of unwashed coffee cups but here’s a film which is of cultural significance called:

MAN WITH A MOVIE CAMERA, the experimental 1929 silent documentary film by Soviet director Dziga Vertov, available from Eureka films in a limited-edition 4-Disc Dual-Format edition as part of the Masters of Cinema Series on 18 April 2016.

Despite the Editor wanting to turn this into a franchise (‘Man with a sound recording machine’, ‘Man with some big lights’ etc) this was voted one of the ten best films ever made in the Sight & Sound 2012 poll, and the best documentary ever in a subsequent poll in 2014, ‘Man With A Movie Camera’ stands as one of cinema’s most essential documents – a dazzling exploration of the possibilities of image-making as related to the everyday world around us.

The culmination of a decade of experiments to render “the chaos of visual phenomena filling the universe”, Dziga Vertov’s masterwork uses a staggering array of cinematic devices to capture the city at work and at play, as well as the machines that power it.

Presented in a definitive new restoration from EYE Film Institute in Amsterdam and Lobster Films, the film is also presented with other works by Vertov, both before and after his masterpiece – Kino-Eye (1924), Kino-Pravda #21 (1925), Enthusiasm: Symphony of the Donbass (1931) and Three Songs About Lenin (1934) – in this limited-edition 4-Disc Dual-Format edition.

· Uncompressed PCM audio on all films

· The Life and Times of Dziga Vertov, an exclusive, lengthy video interview with film scholar Ian Christie on Vertov’s career and the films in this set

· 100-page limited edition book featuring the words of Dziga Vertov, archival imagery and more!
We’re quite keen on making a film about the Editor called ‘Man with short arms and deep pockets’ which will cover an evening out with him as he cajoles his staff into buying him yet another drink at the local pub.