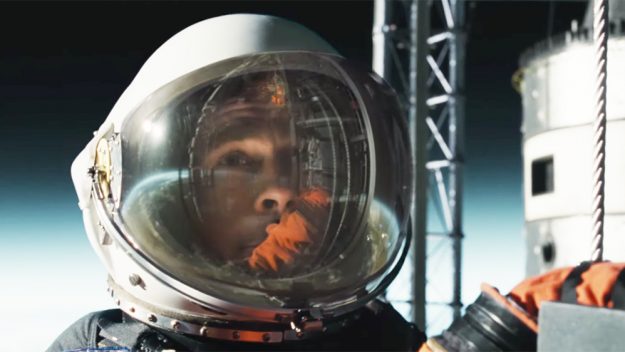 Pooling our knowledge of Latin the team have worked out that Ad Astra means ‘My Bicycle has been savaged by a donkey’. Is it any wonder none of us have a GCSE in Latin between us. It turns out that Ad Astra actually means ‘To The Stars’ a suitable title for a film about an Astronaut Roy McBride (Brad Pitt). It’s in this capacity that we catch him clambering up the outside of some enormous climbing frame type space station floating miles above the Earth when an electrical flare causes an explosion with several astronauts tumbling to their death including Pitt. It’s a bravura sequence as he scrabbles to stop himself spinning uncontrollably and losing consciousness before he finally manages to engage his parachute.

It’s this ability to remain cool and calm under extreme duress that marks him out as psychologically fit for all these space missions where mankind now has a base on the moon and is able to fly billions of miles around space. In fact so level headed is he that we’re informed his pulse never rose above 80 whist he plummeted to Earth.  So when he’s pulled in by the top brass as suitable for a top secret mission it’s then that he’s informed that it’s to go out to the space station that was part of the covert Lima project. It’s a project he’s only too aware of as it was his father, a well respected and highly decorated astronaut, that headed up the mission until he severed contact with mission control.

Writer director James Gray’s film borrows from several films notably 2001 and Apocalypse Now as McBride’s mission is to take a bomb, locate his father who is still alive but appears to have gone rogue and blow him up.  It seems that the Lima project had the potential to end civilization as we know it – a process which we think started when Brooklyn Beckham started believing he was a celebrity rather than someone with a self assured smug smile on his face which makes him look like he wears incontinence pants and is soiling himself as he’s talking to you…..but we digress. 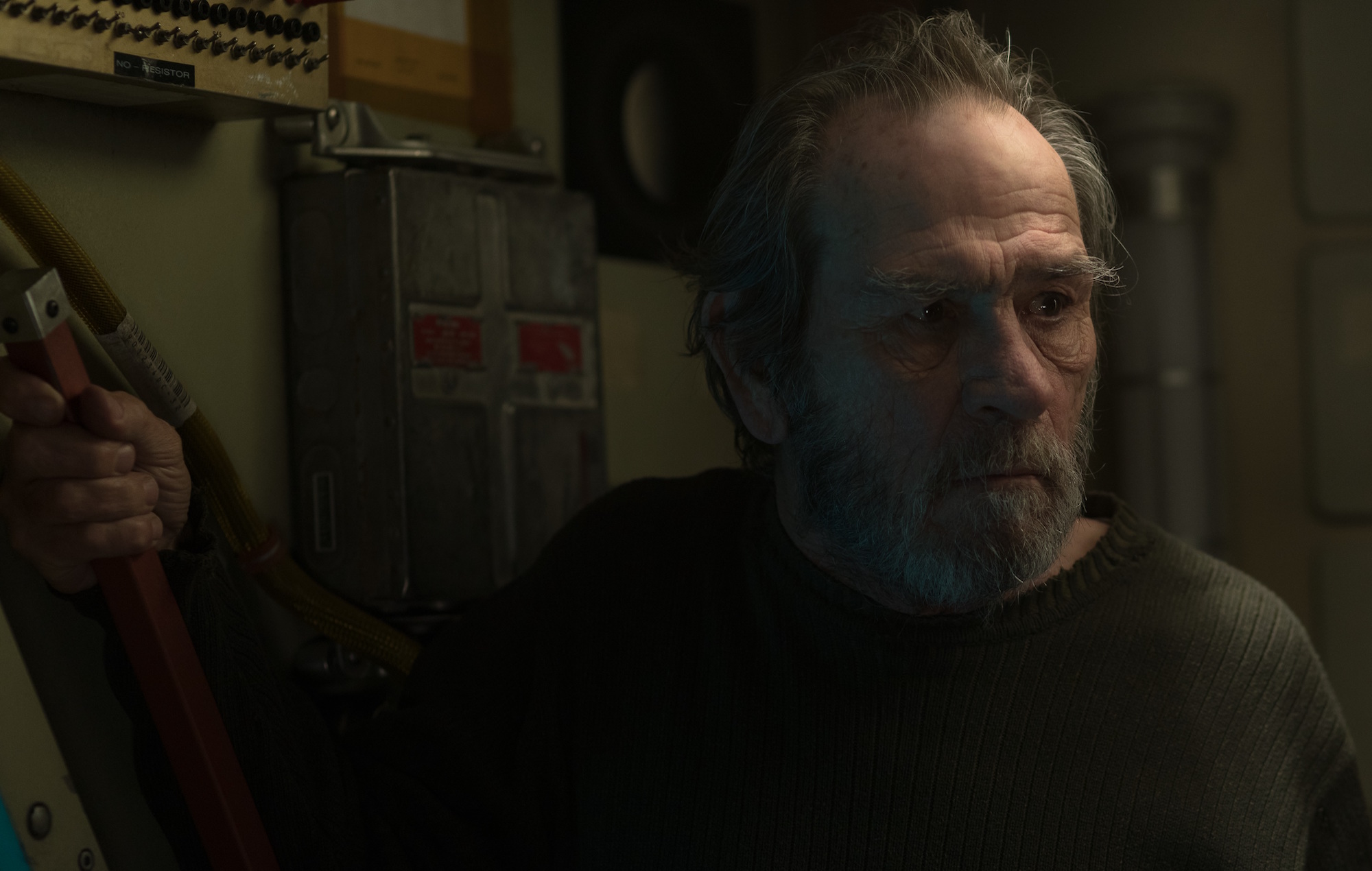 McBride is a bit of a loner, separated  from his wife and happy not to have children with her not wanting a child to go through what he did as a child when his  father went missing. Consequently the film is a bit of a one hander with little from other actors – Donald Sutherland comes and goes as the astronaut who knew his father (obviously, they were both in Space Cowboys years ago),  and Liv Tyler & Ruth Negga are very much on the periphery and as for  Tommy Lee Jones as his father when they finally do have a scene together is brief, so there’s a lot of voiceover from Pitt in contemplation and ruminating about what has happened and is happening. It’s a voiceover that’s not really needed as Pitt underplays the role to excellent effect.

Ultimately this all boils down to McBride and his understandable Daddy issues and there are some very good moments around this – his recording a message for the space agency for his father only to be bundled out of the studio when he thinks they’ve had a reply from his father and there’s a space walk between father and son that could tug the heart strings.  But equally there are moments that don’t seem right – a gun fight inside a rocket, a moon pirate ambush, a crazy ape bonkers baboon are just a couple of moments  and Pitt finding himself in a broken rocket somehow manages to work out how to fly the 2.745 billion miles home – the same distance we laid out in Hob Nob biscuits for Gemma Collins that led to the doorway of Dignitas. 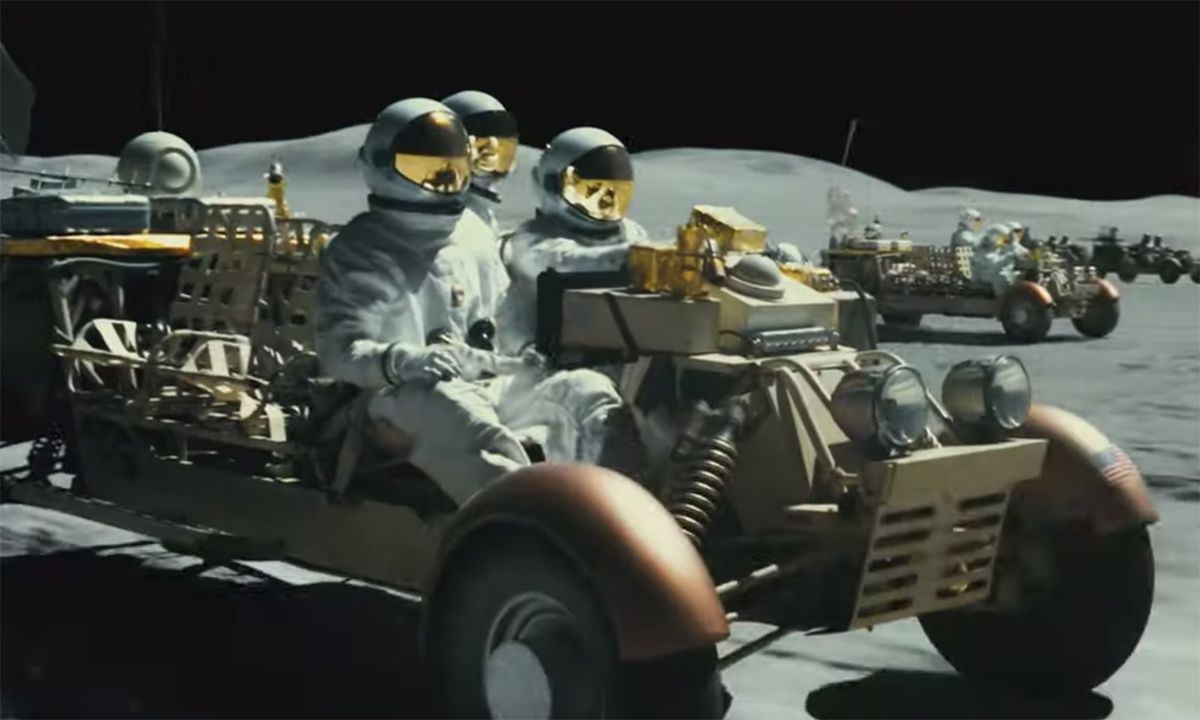 On the plus side the photography for Ad Astra is absolutely stunning and beautifully photographed and realized setting a new benchmark for space based films and must surely be up for a nomination once the award season begins.  Ad Astra is ultimately an intimate drama on an epic canvas. Elegant and elegiac even if it doesn’t make sense all of the time.