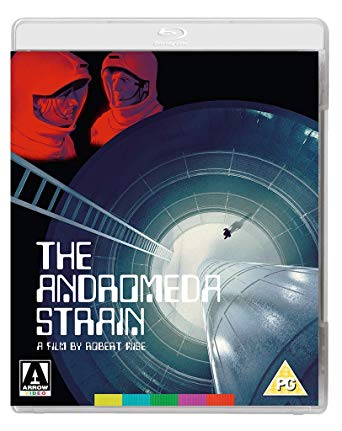 At the time Michael Crichton was still working as a Doctor but what he really wanted to be was a writer and had written several published novels under a pseudonym. The Andromeda Strain  would change all that when it was picked up by a Hollywood studio and was to be directed by no less a director than Robert Wise  who had helmed The Day the Earth stood still, West Side Story, The Haunting and  The Sound of Music – not a bad set of films to have on your resume. But the publicity focused on the director’s new film having been written by a medical student and the eyes of the press were drawn to Crichton and with his anonymity gone he decided to leave the medical world and become a full time writer. He would also end up making an appearance in the film as a scientist but at 6’9’’Crichton was an immensely tall man so he’s seated so as not draw attention to himself.

The Andromeda Strain was to be typically Crichton-esque with his paranoia about advances in science as would be seen in many of his best later books notably Westworld and of course Jurassic Park. Made two years after the novel was published The Andromeda Strain has a government satellite crash outside a small town in New Mexico  and within minutes  every resident is dead except for a baby and an elderly homeless male. The two survivors are sent to a secret underground lab called Wildfire equipped with a nuclear self destruct device that would prevent the spread of infection should there be an outbreak. It’s here that the scientist discover the satellite had bought back an extra terrestrial virus –  codename Andromeda – and race against the clock before it mutates.

The film played like a 70’s version of a 50’s sci-fi film with Haz-Mat suits galore and state of the art computers which, like all on screen technology, dated quickly and Wise kept his film free from stars, a savvy device that increased the suspense as to who if any would survive, to the films end. Effects for the film were provided by Douglas Trumbull who had worked on Stanley Kubrick’s landmark ‘2001 A Space Odyssey’ and was still fledgling in his career when he took on The Andromeda Strain not really knowing how much to charge for his services and almost bankrupted himself in the process. His contribution was a crucial part of the film alongside seasoned and highly regarded pros like Albert Whitlock a hugely respected matte artist who had worked on films like Hitchcock’s The Birds as well as The Thing, Earthquake, The Sting, Catch 22….. in fact the list is almost endless. Added to this was intriguing set design where the studio floor was dug into to make a rocket silo and the different layers of the lab were actually the same one but painted a different colour for each level once the relevant scenes had been shot.

The Andromeda Strain was one of those films that did  adequate business when it opened but has gone on to garner critical appeal and cult fandom as the years have gone by and is now on blu ray for the first time with a whole bunch of extras some of which have appeared on previous discs. So there’s a commentary by Bryan Reesman, critic Kim Newman gives an informed insight into the history of biological sci-fi films. There’s also an archive featurette with a slightly awkward Michael Crichton, a ‘Making of’ and there’s the usual array of trailers  and TV spots and the disc also includes a booklet with writing on the film.