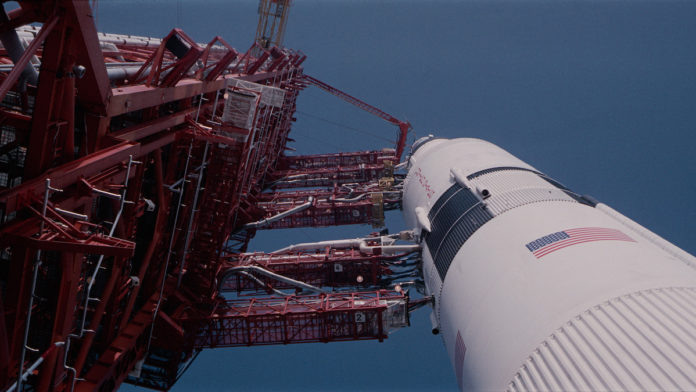 Despite all the problems with Apollo 11 landing on the moon its Neil Armstrong’s words that have gone down in history …….,’one small step for man, one giant step for mankind’ . Perhaps it’s only an American who could have said something so profound because if it was a Brit it probably would have been, ‘Bloody hell, the trouble we had getting here!’ Furthermore the solemn level headed understatement from Apollo 13 , ‘Houston, we have a problem’, if it had been a Brit would probably have been , ‘Oh bugger, the rocket’s f**ked!’ but we digress……..

Despite the ludicrous conspiracy theories the putting of a man on the moon remains one of mankind’s most incredible achievements alongside Amanda Holden’s agent getting her a job as a judge on Britain’s Got Talent which seems a deliberately ironic hiring by the shows producers. Todd Douglas Miller’s documentary is a moment by moment narrative that starts with the wheeling out of Apollo 11 to the launch pad through to its actual launch before landing on the moon and its safe return to earth.  The documentary has unearthed so much footage it seems that nothing was left un-filmed. The general consensus in our office is that Amanda Holden is awful whilst at the other end of the spectrum,  Apollo 11 is awe –full and there’s a sense of inspirational wonder about the mission.  Though the outcome is well known there are moments uncovered here that the public were unaware of notably that even as the astronauts were being escorted to the rocket technicians were tinkering with last minute repairs in the hour before its launch. At the same time Americans had flocked to the site yet were kept several miles away and there’s something almost comical as they settle down to picnics and barbeques as they await one of the greatest moments in modern science.

Most documentaries are small intimate affairs but the scale of this is difficult to absorb and Apollo 11 lends itself brilliantly to the IMAX format. The sheer scale of the rocket alone is difficult to comprehend but that it is transported at walking pace to the launch pad and because  Cape Kennedy is so vast and flat there’s little to compare in scale apart from the humans who are like ants around it.

Last year we had a dramatized account of the preparations with First Man and Apollo 11 is a straight forward presentation of the sequence of events. This is a compelling documentary of what humans can achieve and the fame that is bestowed on them for their bravery and achievement puts them in a different world, literally, to today’s celebrities most of which have all the personality of an empty tupperware box with the sort of vacant dead eyed look that if they were on life support would have the doctors unplugging them.  Apollo 11 is a stunning documentary and if nothing else you’ll at least come away be able to name the third astronaut beside Neil Armstrong, Buzz Aldrin……………………………..and Michael Collins.