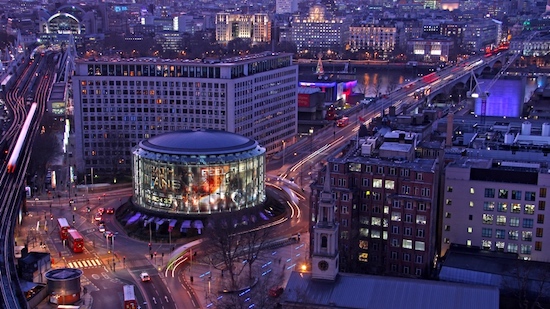 So we’d be the first to admit that we love watching a film on IMAX especially the BFI IMAX Waterloo which is the biggest screen in the UK – a staggering 65 feet high – the equivalent of five double decker buses – and 85 feet wide.

Since launching 23 years ago in 1999, BFI IMAX has become one of the most successful IMAX cinemas in the world, welcoming an average of 300,000 visitors each year and playing host to some of the world’s biggest film premieres including Eternals, Mission Impossible: Fallout, Inception, The Batman and X-Men: Apocalypse. A-list talent have attended events at BFI IMAX, with Leonardo DiCaprio, Angelina Jolie, Tom Cruise, Salma Hayek, Robert Pattinson, Hugh Jackman, Thandiwe Newton, The Rock, Kevin Hart, Kit Harrington, Gemma Chan, and even Prince William attending.

Well now one of the most successful IMAX screens in the world is now better than ever! Today (Friday 11th November 2022) sees the BFI IMAX reopen to the public at 6AM with multiple screenings of highly anticipated blockbuster Black Panther: Wakanda Forever which we were fortunate enough to see on the new screen – read our review HERE

So if you’re wondering just how the UK’s biggest IMAX screen can possibly be improved on here’s how they did it….

The impressive upgrade will offer audiences both a premium technical and first-class customer experience. The cinema giant has introduced IMAX with Laser, designed exclusively for IMAX screens. The next generation 4K laser projection system features a new optical engine and a suite of proprietary IMAX technologies that deliver increased resolution, sharper and brighter images and deeper contrast as well as the most distinct, vivid colours ever available on-screen, and an increased contrast, brightness and colour that only IMAX can deliver.

Alongside the new projection system sits a traditional 70mm IMAX projector – of which less than 60 remain globally – and a standard D-Cinema projection system, plus scope to project from 35mm and standard 70mm. This range of cinematic options, underpinned by BFI’s world-class programming, cements BFI IMAX as a destination to experience the art of filmmaking, from cutting edge blockbuster IMAX releases to much loved classics.

Other upgrades to the 493-seater auditorium include plush new seats with four wheelchair spaces and new carpeting. With the BFI resuming management of the venue in the summer, it also brings its expansive programming expertise to the venue, offering a diverse range of screenings and events that will attract audiences of all ages and backgrounds.

The programme will feature complementary seasons (an all night horrorfest is rumoured to be announced soon) and events with its neighbouring venue, BFI Southbank, creating a film hub destination for the capital that embraces and celebrates a broad range of screen culture.

Since July 2022, BFI IMAX programme highlights have included Moonage Daydream – reviewed HERE, the cinematic odyssey exploring David Bowie’s creative and musical journey which was seen by more people at BFI IMAX than at any other screen in the UK on its seven day run. The venue also presented its first ever screening in IMAX of E.T. The Extra Terrestrial (marking its 40th anniversary) and Jaws.

Jaws – the story behind the shot