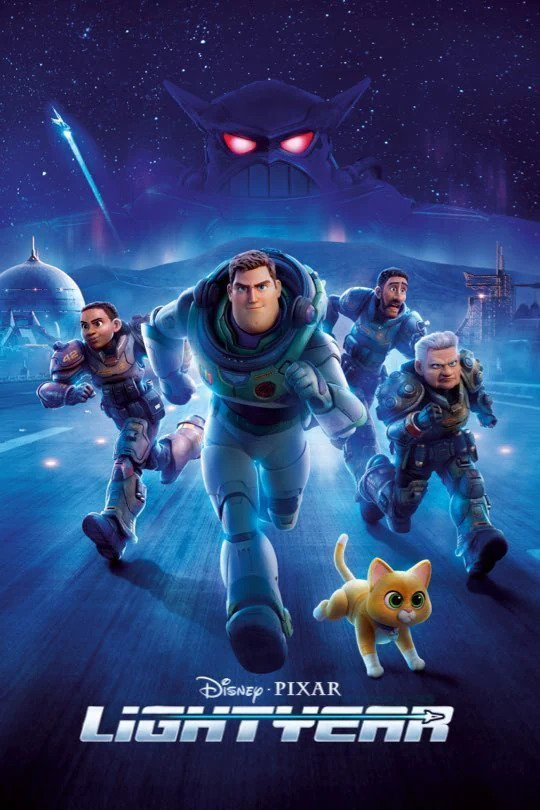 Whilst we’ve been spoilt with Pixar sequels led by Toy Story we’ve yet to have a spin off and its Toy Story that provides it with a Buzz Lightyear film titled appropriately enough, ‘Lightyear’. But this is a spin off with a difference in that Pixar have set this up as the film that inspired the Buzz Lightyear doll that featured in Toy Story and its sequels. All very meta but its works well with the film finding our hero, this time voiced by Chris Evans rather than Tim Allen landing on a planet along with his fellow ranger Alisha Hawthorne that sees them running back to their ship like prospective buyers from an estate agent telling them that the rampant Japanese knotweed is nothing to worry because that’s exactly Buzz and Alisha seem to be chased by as they flee. But Buzz doesn’t quite save the day with their ship badly damaged leaving them marooned on the planet and there only means of escape is to try to make a hyper speed crystal that will power their ship.

As with Top Gun’s  Maverick it seems that Lightyear is very much cut from the same cloth as he pilots his ship on test flights that will assist in getting them back home. What he is unaware of initially is that his four minute flight as he attempts to get to hyper speed actually equates as four years back at the base and each mission sees him return to an ever aging crew. Now Pixar at their best have put together sequences that rival the best  tear jerking scenes of Disney with the first ten minutes of ‘Up!’ being one of the best and like that scene it’s the passage of time and inevitable aging that has its moment here as Buzz sees Alisha aging until the inevitable and in that respect it takes a page out of Christopher Nolan’s ‘Interstellar’. In fact for the eagle eyed there’s a lot of homages in here that takes in Star Wars obviously bit also films as diverse as 2001 and Aliens.

It’s when Buzz returns from another test flight that he is met by Izzy, daughter of Alisha, and keen to follow in her steps aligns herself with helping him along with her two colleagues Darby (Dale Soiules) who’s on a probation order and gaffe prone Mo (Taika Waititi) incapable of doing anything correctly. Bet of all though is Lightyear’s pet, Sox the cat, a robot feline built to relive stress for space rangers voiced by Peter Sohn. Sox is the super star sidekick destined to be the in demand Christmas toy this year. With a tail that acts as a USB and instead of coughing up furballs coughs up tranquilizer darts or a welders flame….. he is a great sidekick!

But fans of Toy Story will see the return of a favourite with Emperor Zurg, whose appearance have been fleeting in the Top Story films here commands an army of red eyed robots who have taken over the base where Buzz was stationed. It’s from here that Buzz and new band of friends have to work together to overthrow Zurg who is also after a hyper speed crystal for his own nefarious ends.

Directed and co-written by Angus MacLane who has served his time working on a number of Pixar projects that date right back to 1998’s A Bug’s Life he finally gets a chance. Like so many at the studio, he has been offered the chance to step up and helm his own feature and he has done a great job here. Though this doesn’t have the jokes or lines that are there for the adults and there are perhaps too many subsidiary characters, Darby and Mo don’t bring that much to the table, but nonetheless this is immensely likeable feature which ensures that Lightyear is out of this world