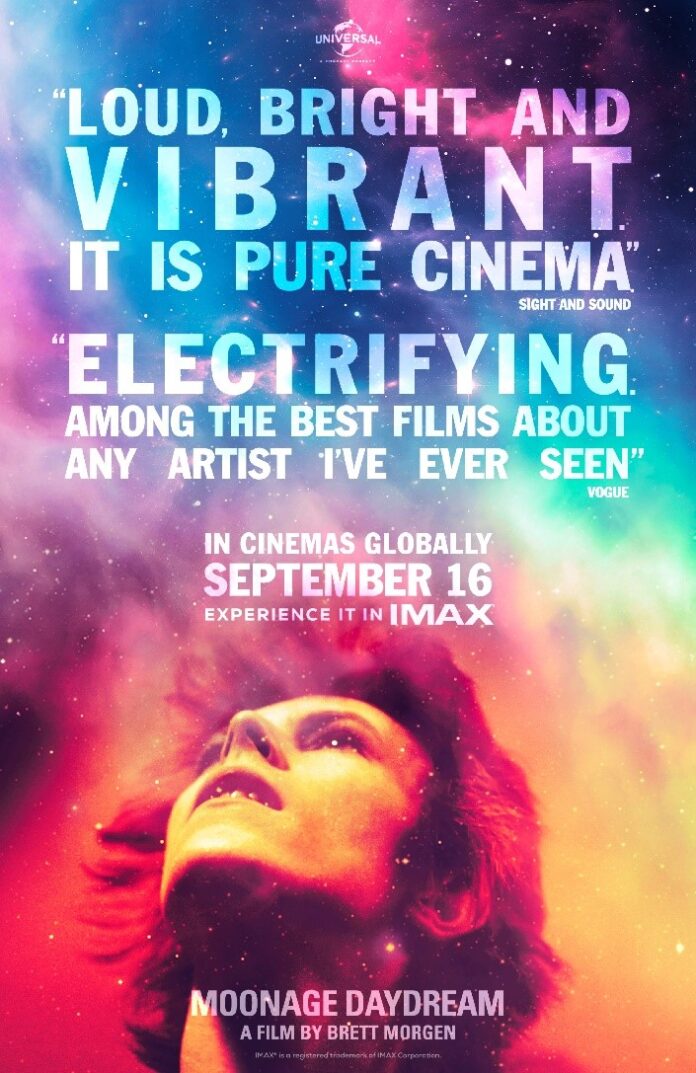 When a documentary about a pop star opens with said popstar commenting on the words of Nietzche you’d be excused an eye roll – it’s usually has all the credibility of Brooklyn Beckham’s work ethos. But here it’s the late David Bowie commenting about the philosopher’s view of God and Man and to many Bowie was something of a god. But the documentary Moonage Daydream, whilst not positing that he was some sort of deity, it certainly presents him as an artistic polymath and justifiably so. An art student he found fame as a singer-songwriter breaking boundaries with his androgynous look starting with Ziggy Stardust and later Aladdin Sane and The Thin White Duke and the interviews unearthed by director Brett Morgan show him admitting that they were facades for him to hide behind. Equally all the interviews show him to be unfailingly polite and charming, a world away from the likes of Kanye West whose trigger hair temperament has all the hallmarks of a divorced Vietnam vet stuck behind a tourist standing on the wrong side of a London tube elevator.

Though his singing-song writing was what brought him fame and fortune in essence he was  a creative continually looking for inspiration never buying a house (until he married Iman) and instead moving from London to LA to Berlin in what were arguably his most creative periods . But his interests took in painting , sculpting, film making and performance in films of varying quality as well as the occasional theatre taking the title role in the stage  version of  The Elephant Man. Underlying much of his work  was a theme of isolation that so fascinated him and underpinned much of his early work notably in the 1970’s. where his brilliant songs elevated him to superstardom .

What Moonage Daydream does make clear is his constant creative urge which he went about with a sense of purpose and it’s this aspect of the documentary which is both inspiring, uplifting even life affirming that we shouldn’t waste a day. Morgan has masterfully assembled several sequences into a whirling dervish of sound and image that are utterly captivating and euphoric making this a monumental and majestic experience and essential viewing on a big screen.