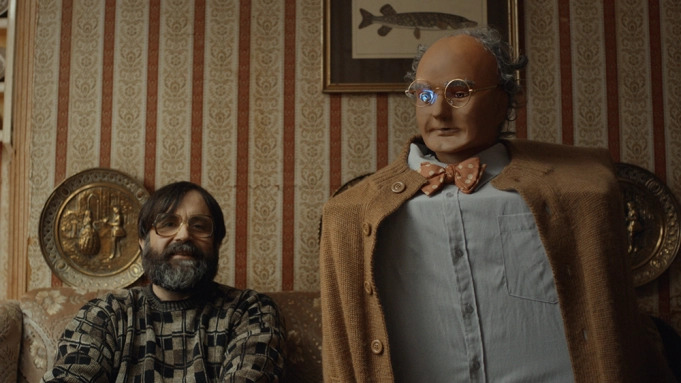 So you might not be familiar with the name David Earl but you will know his face from Ricky Gervais TV series having had a brief cameo in Extras he’s appeared in Derek and After Life and the blooper reels show him as notorious for making the cast and crew laugh as Ricky Gervais is himself. But now we get a chance to see him in a lead role with the release of the Brian and Charles trailer

David earl plays Brian a lonely, luckless inventor who takes on his most ambitious project yet. Enter Charles — Brian’s extraordinary masterpiece – an artificially intelligent robot made from odds and ends, including an old washing machine, who has an inexplicable obsession with cabbages.  Together, Brian and Charles is a heart warming and entertaining tale about friendship, family, finding love, and letting go.

A breakout hit at the Sundance Film Festival, Brian and Charles was directed by Jim Archer, written by David Earl and Chris Hayward.  It stars David Earl, Chris Hayward, Louise Brealey, James Michie and Nina Sosanya.  This marks Archer’s feature directorial debut after cutting his teeth shooting comedy sketches with friends before writing and directing several short films culminating in winning gold at the Young Director Awards in Cannes for the short film version of Brian and Charles.

Here’s the Brian and Charles trailer……