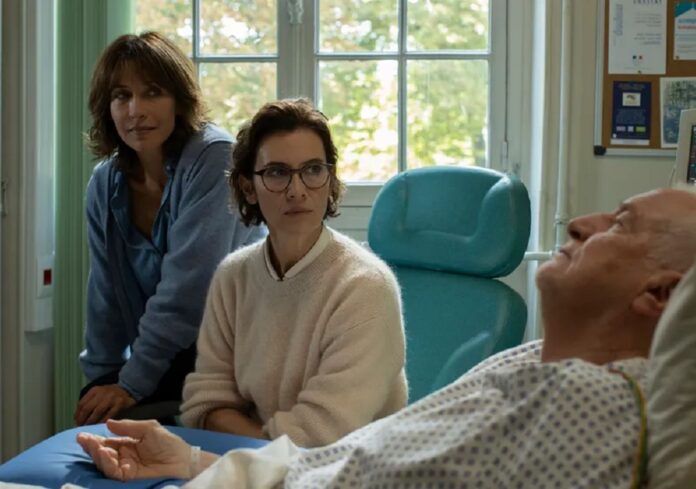 Everything went fine at our Editor’s recent birthday celebrations that is until he unwrapped his birthday present from the team where we had clubbed together to buy him a gift voucher for Dignitas (‘You’re still fired!‘- Ed) but for many the decision to end their life is not taken lightly and tabloid stories are rife of those suffering from a terminal illness and in constant pain that a visit to the infamous Swiss clinic is an understandable option. In the instance of new release Everything Went Fine turns out to examine that very choice. Andre (Andre Dussollier) is the elderly father of two loving daughters Emmanuelle (Sophie Marceau) and Pascale (Geraldine Paihas)  used to his stubborn, arrogant, cantankerous ways but its Emmanuelle who tends to him most frequently so it’s her who gets a call with news of her father having had a stroke and is now partly paralyzed. Like most senior citizens he is resolutely independent but his stroke has robbed him of even being able to take care of himself as he normally would. Unable to bear the condition he finds himself in he asks Emmanuelle to help him do the unthinkable – to die by assisted suicide. It’s an unbearable decision for any daughter or son to make and there’s a pathos to all of this as he is resolute in his wish that this should happen only after he has seen his grandson perform a clarinet recital.

Emmanuelle and Pascale already have to contend with their artist mother (Charlotte Rampling) whose own health grows ever worse with the effects of Parkinson’s disease. They also have to contend with their father’s gay lover Gerard and his insistence on trying to see,  him more interested in getting his hands on Andre’s expensive watch than any sense of love. Furthermore Andre cannot die by assisted suicide in France as it breaks the law although in fairness anyone surrounded by the French would understandably consider suicide. It is the Swiss hospital’s nurse (Hanna Schygulla) who visits Emmanuelle and Andre to make the arrangements and legalities of paperwork that need to be made to get him covertly to the clinic without police getting involved.

Everything Went Fine is based on the book by the real life Emmanuelle Bernheim who herself died in 2017 and her book explored her own relationship with her father. The film flips back to Emmanuelle’s childhood and her father who is knowingly cruel to her and yet she is his favourite daughter though his behaviour leads to her harbouring thoughts of killing him herself. And yet now decades later he is unwittingly going to grant her childhood wish. It’s a grim scenario but the film doesn’t set out to milk the obvious tear jerking moments. Here is a man who is not in any real pain, his quality of life is not diminished to unerring hardship but he has just simply had enough and is wealthy enough to end it all unwilling to enter into any debate about it. He is resolute in his decision.

This is not the emotional tear fest that might be expected but when the draws to a close at the end of a moving third act it is understated but still undeniably moving.

Here’s the Everything Went Fine trailer……