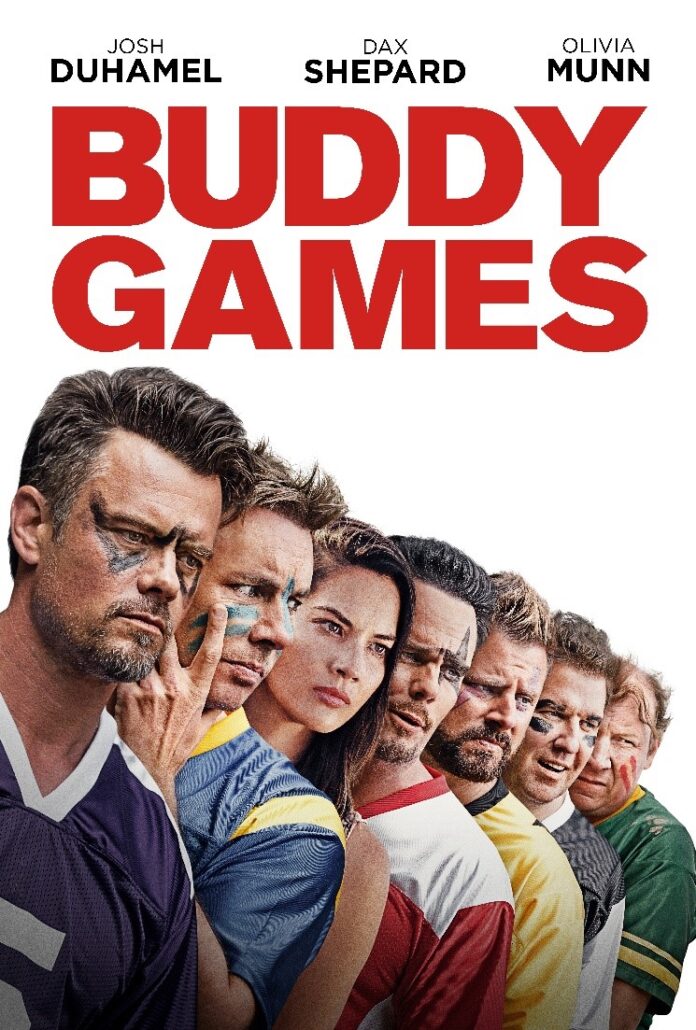 Actor Josh Duhamel has been slowly building his career ever since his first notable appearance in 2007’s Transformers and even landing a lead role opposite Anthony Hopkins and Al Pacino in Misconduct. Well now he’s got the directing bug following in the footsteps of Clint Eastwood, George Clooney and Ben Affleck but rather than write a drama he’s gone for the laddish comedy with his debut film, Buddy Games.  Six friends gather each year to play a load of physical games with toys for boys that culminates in a paintball game easily won by Shelly (Dan Bakkedahl) antagonizing his friend Bender (Nick Swardson) with his overall win.  Now it’s a mark of the sort of man that Shelly is that when his gorgeous wife, bored with the buddy games, tries to entice him into the bedroom he instead chooses to go tea-bagging one of his friends who’s fallen asleep in a chair (if you don’t know what it is look it up but NOT if your reading this in the office!)

The Jackass level humour continues when one of Shelley’s bollocks is blown off by a rogue paintball shot from Bender bringing the buddy games to an end that year in fact it ends any further buddy games for the next five years as they all go their own way until Bob aka The Bobfather (Josh Duhamel) gets a call to visit Shelly (aka Nobby NoNuts) who drops the news that due to the accident he lost both balls. But what Shelly wants is to rekindle thier friendship by resurrecting their annual play time and see all the friends again except Bender. Let the Buddy Games re-commence!

So the gang met up again with Bender wangling his way back into the annual Buddy Games and in an attempt to build bridges with Shelly knowing that he can no longer have kids gifts him vials of his own baby batter – yes really! It’s about as welcome as finding the barman at the cocktail bar on your Hen night is Bill Cosby. But their weekend continues with a load of physical games in an effort for old wounds to be healed and wrongs to be made right between the two which all comes to a climax in the final buddy game. 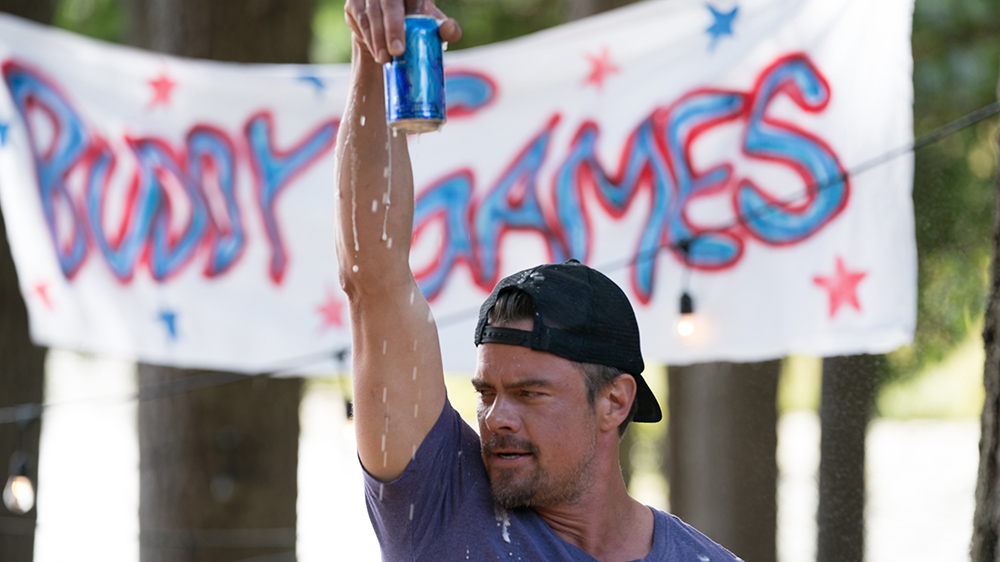 The fratboy humour of these type of films is a notoriously tricky genre to get right – for every ‘The Hangover’ there’s a ‘Grown Ups 2’ with the gross out tropes being balanced by the man-boys finding themselves and that’s what Buddy Games tries. So though it sticks with those standards the central pair of Shelly and Bender are just so boorishly boring and argumentatively aggressive to each other that’s its difficult to believe that they’re friends and impossible to take a liking to them.  And the other friends are underwritten to the point of being background artists which is a shame as Kevin Dillon is wasted as is Dax Shepard who is no stranger to this kind of thing having written and directed the dreadful film adaptation  ‘CHiPs‘.  Women are sidelined to invisibility and Buddy Games is uneven in tone taking in unamusing gross out jokes (from the moment Bender’s gift is seen you know that’s not the last you will have seen of it) to a potentially fatal action scene. It’s the first feature script of the three screenwriters that includes Duhamel and when you consider that the directing debut for Eastwood was ‘Play Misty for Me’, for Clooney it was ‘Confessions of a Dangerous Mind’ and for Affleck it was ‘Gone Baby Gone’ then it’s a far from auspicious start as a director for Duhamel.

BUDDY GAMES IS AVAILABLE ON DIGITAL DOWNLOAD FROM 30TH NOVEMBER 2020