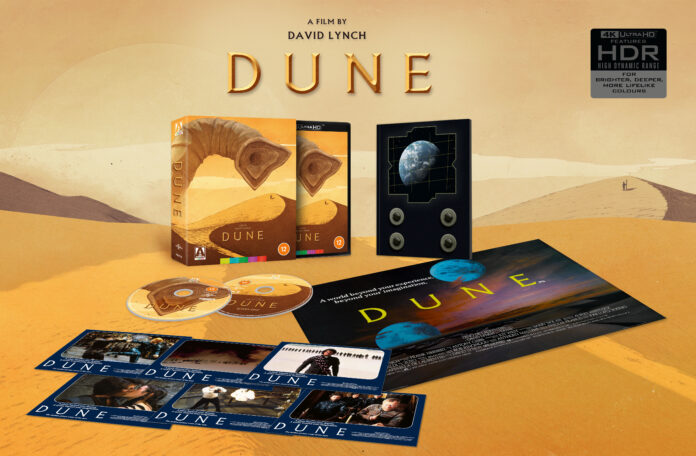 The likelihood of a director of a black & white art house horror film helming a big budget blockbuster sci fi film is about as likely as Michael Bay directing an adaptation of an Ibsen stage play. Except that’s exactly what happened when David Lynch was offered and accepted the opportunity to direct Dune. His unnerving horror film ‘Eraserhead’ had found a fan in Mel Brooks of all people who wanted  him to direct The Elephant Man – a brave move but one that paid off with the film rightly earning plaudits and it was super producer Dino De Laurentiis who came knocking asking him to direct his mega budgeted adaptation of Frank Herbert’s classic sci-fi novel Dune about the son of a noble family entrusted with the protection of the most valuable asset and most vital element in the galaxy.  That simplifies the story in the extreme of what was a massive tome with an epic story requiring a film of equal proportions. 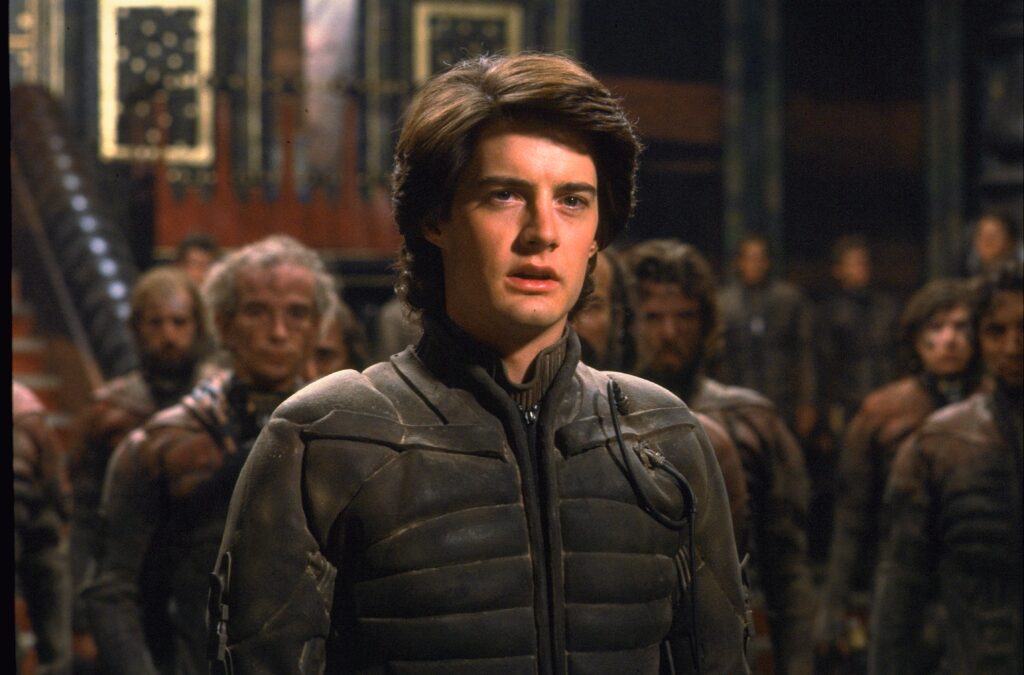 The films huge and varied sets had taken almost two years to design and build and there were so many that they were rapidly dismantled so as the studio could accommodate the next gigantic set in what would be an arduous shoot for cast and crew alike. The cast especially had endured unimaginable heat in Mexico having worn costumes made of rubber and leather causing them to sweat, dehydrate and faint in the searing desert heat.

Despite David Lynch’s persona being somewhat ethereal and esoteric he was generally much liked by the crew for his serene politeness  despite a stressful shoot and maintained his reputation for the strange as actor Paul Smith found when he came onto set one day to find a frozen cow hanging upside down and being poked by midgets. In fairness it was hardly out of keeping with other elements in the film which included a cat in a cage that needed milking and few could forget the sight of ginger haired rock god Sting naked bar for a winged jock strap. 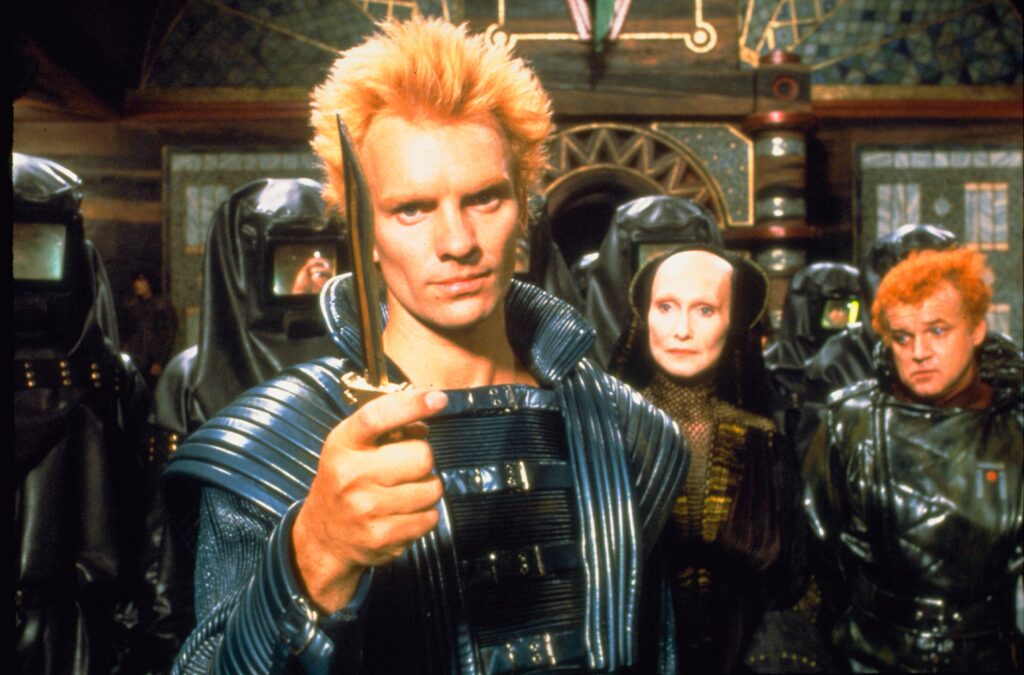 Lynch’s version of Dune would be 3 hours long but it put him in conflict with De Laurentiis who wanted a 2 hour cut and it fuelled the media with stories until the final 2hour 17 minute film was finally released for critics with their knives now sharpened and who wasted no time in laying into it. In retrospect they were a little unfair because whilst Dune is certainly not without its problems there’s a lot to like with its every era influenced costumes and stunning production design and decent for the time special effects. But after the cartoonery of the recently completed Star Wars trilogy Dune was far heavier going and audiences did not take to it in the matter that the film makers needed and the $40m film wound up earning only $30m worldwide. 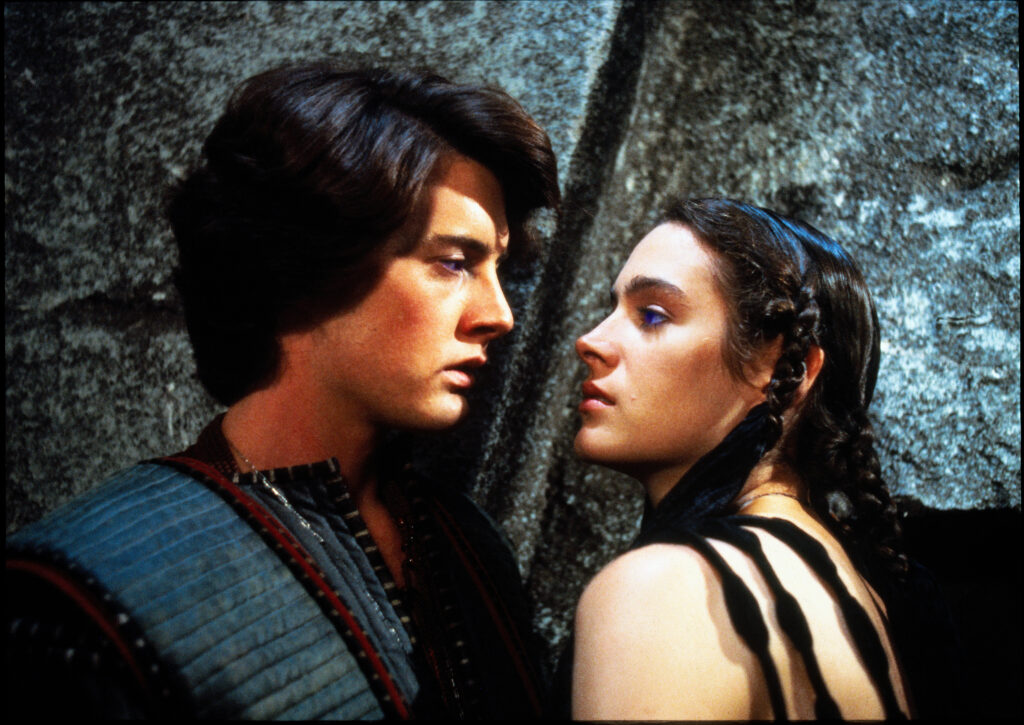 With director Denis Villeneuve big budget two part version of the film now on the horizon it’s a good time to re-release this 1984 version for re-appraisal in what was an exception to the usual oeuvre of David Lynch’s back catalogue. This edition of the disc has a huge array of bonus features taking in just about every aspect of the film’s production all of which are a must for fans of the film. One of the most intriguing featurette’s is that about the merchandising of Dune which after the success of Star Wars where George Lucas had secured the merchandise licensing making him a fortune, it  saw every studio seeing toys and such like as a lucrative little earner and Dune would be no different. Toy expert Brian Stillman offers an insight into everything Dune related where the toys quickly found themselves in the bargain bin after the films failure. 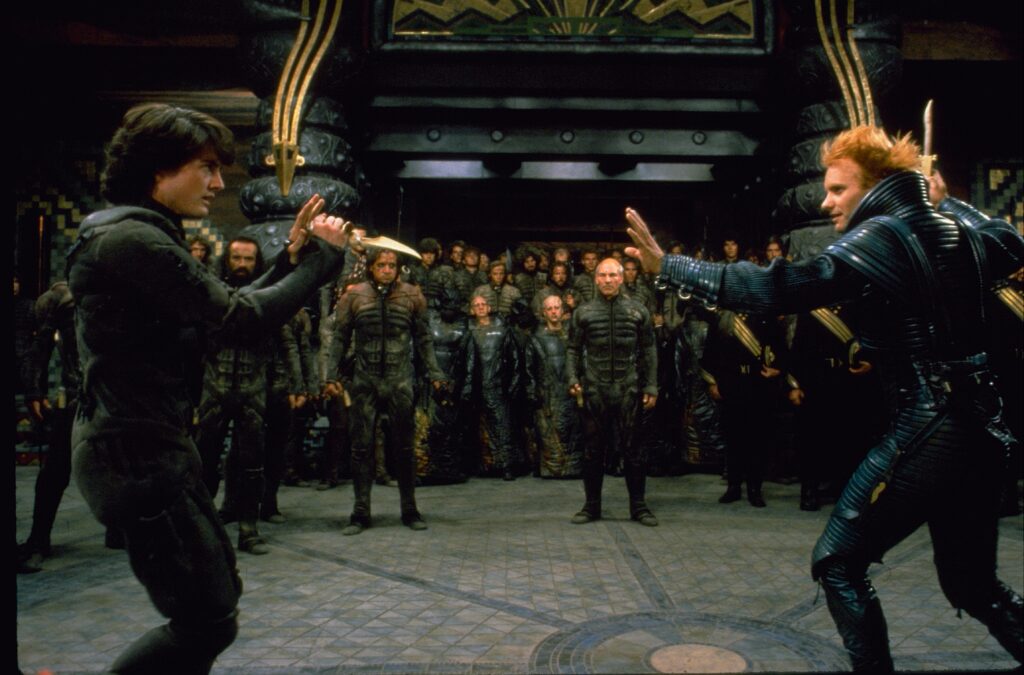 This Dune disc is another excellent re-release that has had much attention lavished on it but perhaps the only and most obvious element missing is a David Lynch commentary as well as his own 3 hour cut of the film but the production took its toll on the director and Lynch has never returned to big budget films again sticking to a genre specific to him alone for which he has made an enviable reputation. Dune as a movie was always going to be a monumental challenge for anyone but this first attempt (a TV series followed in the 00’s and Jodorowsky had tried, and failed, to make a film in the 70’s) is well worth a look and is far from the disappointment it is remembered as being and the bonus features alone make this an essential edition to any sci-fi collection