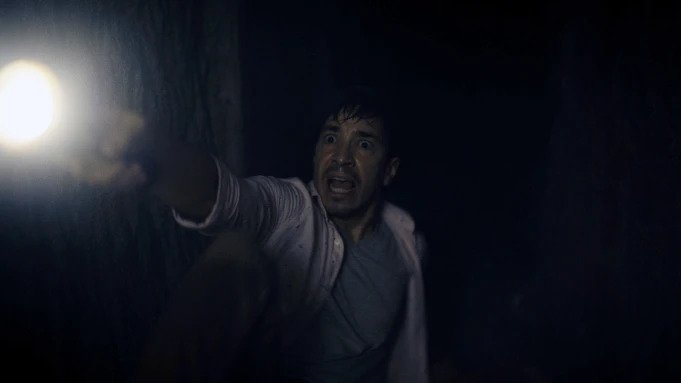 Double bookings at AirBnB’s have become a rising plot point for several recent films notably Alone Together and Gone in the Night but the contrivance is ramped up to the max in  Barbarian when Tess (Georgina Campbell) arrives at the Detroit house she’s booked only to find that there’s another tenant already living there. That this new tenant is Bill Skarsgard aka Pennywise from ‘IT’ should be enough of a forewarning But as Keith, Skarsgard has audiences already suspecting that something’s amiss and Tess really should be wary of him persuading her to stay there for the night as there’s a convention in town so the hotels will be fully booked. But Keith wins us and Tess over and she’s no dummy despite her predicament refusing to drink anything he makes her, taking a picture of his ID, locking  the bedroom door etc and there’s a scene where the two discuss the dynamics of the situation if the roles were reversed.

As written by director Zach Cregger there’s a number of moments that will have audiences wanting to shout, ‘Get out of there!’ where Tess, having been a clearly intelligent woman, now takes several increasingly dumb decisions. But that’s to decry what is a brilliantly creepy film that is effectively broken into three acts each going back further in the timeline of the house that includes Justin Long as A.J, a Hollywood actor, whose career is about to come to an abrupt halt when an actress accuses him of a #MeToo type crime and he soon needs to liquidate his assets one of which is this house that he rents out via AirBnB. Long, like Campbell is highly effective in his role and whereas Tess is essentially a decent woman A.J. is a preening self-absorbed narcissist.

Georgina Campbell stars in ‘All my Friends Hate Me’ reviewed here

To reveal any more about what is going on with the house would be to spoil what is a highly effective shocker that is in turn both claustrophobic and occasionally almost unbearably tense with audiences forced to stare into the stygian gloom as the film unfolds revealing what is at the centre of it all. Though indebted to 2016’s thriller, ‘Don’t Breathe’ its initial premise would not be out of place as a Netflix true crime documentary but if you’re looking for an effective horror shocker this Halloween then Barbarian fits the bill brilliantly.