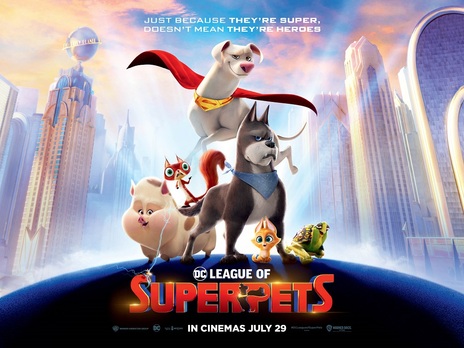 When every animal seems to have a human super hero it’s only a matter of time before every one of those same animals become superheroes themselves and DC League of Super Pets is just that film. Tonally it starts off initially acknowledging its human superhero origins with Superman as a baby escaping Krypton as a baby but the twist here is that the family’s pet dog leaps into his escape pod and journeys to Earth assuming the same super powers. The super dog now goes by the name of Krypto, although if the dog mess in our local park is anything to go by then Krapto might be more appropriate and that the dog can also fly means that avoiding pooing pigeons pales into insignificance when considering what could be falling on your head from above when Superman takes Krypto ‘out for a fly’ But we digress because arch nemesis Lex Luthor is on the scene and out for power again and using orange Kryptonite like some despotic vivisectionist he’s enabled a bunch of animals with superpowers that has the them led by a hairless hamster believing that its working in cahoots with Luthor in his plan for world domination.

But Luthor finds himself imprisoned by Superman and the Justice League which has Green Lantern as a female and Wonder Woman with the physique of a WWF fighter but they too all end up incarcerated by the heinous hamster and his friends from the lab. Having been tricked into eating green kryptonite Krypto loses his own superpowers and has to rely on a handful of pets from an animal sanctuary who have been gifted super powers akin to those of the Justice League except for a pig whose super power seems to be grow morbidly obese at will making her the ideal superhero sidekick to Gemma Collins.

Like many animated films it does succumb to feeling the need wo lend the animals with the vices of famous faces led by Dwayne Johnson and it now seems that wherever he goes regrettably Kevin Hart follows to do his usual schtick to no avail. But there’s something immensely enjoyable about the freedom of animation to allow the film makers to do things that can’t be done in a live action film and here we have pet cats that cough up fur ball grenades and fires weapons from their tail, tortoises that travel faster than light and hamsters made of water and fire running amok amongst buildings that turn into rockets. Add to this a script with some clever quips for the adults and it makes DC League of Super Pets an ideal film that both children and adults will enjoy