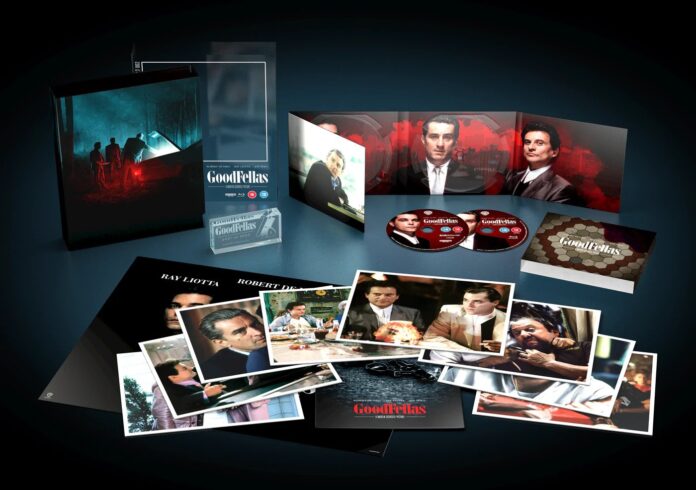 By the end of the 1980’s Martin Scorsese was generally regarded as one of the finest if not THE finest modern American film director. But 1988 saw him reeling from the controversy of the release of The Last Temptation of Christ almost solely due to a single scene of the crucifixion where Christ momentarily envisages a life as a normal man. Scorsese, a devoutly religious man with a Catholic upbringing, it was an exploration of his faith but the fallout from the film’s release that had seen protests outside cinemas, was a shock. But it would be his next film would re-establish his reputation after having helmed one of the short and frankly slightly dull episodes in 1989’s ‘New York Stories’. That film would be 1990’s Goodfellas based on the true life story of mob informant Henry Hill who had turned state witness. Based on the book by Nicholas Pileggi the film would see Robert De Niro collaborating once again with his favoured director. But leading the film as Henry would be the late Ray Liotta who had campaigned heavily for the role before eventually earning it and would co-star Joe Pesci in a mesmerising performance that would define his screen persona forever more.

De-aging De Niro – the making of Scorsese’s The Irishman

The story of Hill’s life in the mob covering his relationship with his wife Karen and his mob partners was an astonishing piece of work that vies with The Godfather as the greatest mob movie ever made. Scorsese was at the peak of his cinematic powers opening his film with a seemingly innocuous scene of the three driving in their car at night before the shocking brutality kicks in with a psychotic Pesci and Hill’s voiceover telling us, ‘As far as I can remember I always wanted to be a gangster’ What follows is Hill’s rise from a schoolboy before joining and rising through the ranks of the local mob over the decades before it all comes crashing down.

The film was a huge critical success and audiences loved it and remains one of the favourites from film fans and the awards bodies agreed with the film earning six Oscar nominations but winning only one for Pesci as Best Supporting Actor against that other mob movie The Godfather III which had  had also earned a Best Supporting Actor nom for Andy Garcia also as a slightly unhinged mafia hood. In fact it was something of a battle of the mob movies that year as Goodfellas found itself competing for Best Film and Best Director with The Godfather II and Francis Ford Coppola. In the end neither would win with Kevin Costner instead winning Best Director and Best Film for Dances with Wolves. And therein lies the continuing farce of who actually wins Oscars  usually awarding the latest film that has capturd the hearts if not the minds of the academy members and lets be fair Dances Wolves did not have the longevity of Goodfellas.

Scorsese’s masterpiece ( one of several in his back catalogue)  remains a film that can be revisited time and again. So it’s fitting that there is a brand new collector’s range of iconic classics under The Film Vault banner,   in 4k housed in  stunning new packaging and containing premium collectables. Here the bonus features include  2 commentaries  – one cast & crew the other cop & crook and both are hugely entertaining.  Added to this is featurettes on the films production, the films legacy, plus others that include The Workaday Gangster, Paper is cheaper than Film plus a load of others as well as the usual trailers. Included in the premium package is new key art, individually numbered crystal display plaque, a clamshell box with magnetic closure, 8 collectable cards and  a double sided theatrical poster. Frankly short of having Scorsese sitting with you this Film Vault release of the film makes this the ultimate edition and one that any fan of the film cannot do without.

How the mafia tried to stop The Godfather from being made

Alongside Taxi Driver, Raging Bull and The King of Comedy this remains possibly Scorsese’s most beloved film and is a rightly lavish and essential addition for any film fan’s collection.

Here’s the an unpackaging of this premium edition of Goodfellas…..