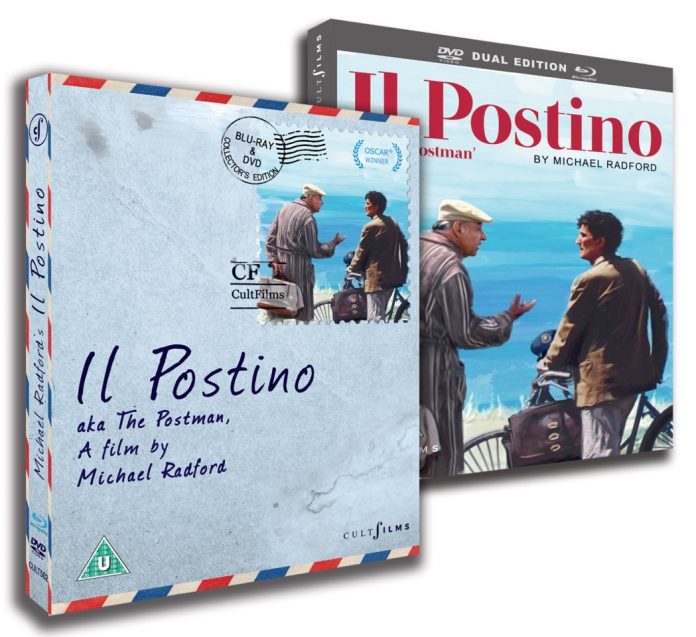 By the time writer / director Michael Radford came to making Il Postino in 1994 he already had a handful of respected dramatic films under his belt him that included, ‘Another Time, Another Place’, ‘White Mischief’ and ‘1984’ which would turn out to be Richard Burton’s last film.

It wasn’t to be the last time he would direct a film where an actor was to make his last appearance because the 1994 Italian film ‘Il Postino’ would be actor Massimo Troisi’s.  Troisi was a respected Italian actor and had approached Radford about the possibility of directing a cherished project of his called ‘Il Postino’ based on a novel about a rather simple man who takes a job as a postman.

Scripted by Furio Scarpelli together with Anna Pavignano, Massimo Troisi and Michael Radford the story follows poet Pablo Neruda’s exile to a tiny island off Italy where, being a high profile figure, he receives such huge quantities of mail that the local post office must hire an extra postman: Il Postino. It is as he carries out his round that he delivers mail to the famous poet who teaches him about love poetry and learning whatever he can the postman uses his knowledge to woo a local beauty.

It’s a simple story shot against a stunning Italian background but the film was struck down by impending tragedy. Just before filming began Troisi was made aware of a worsening heart condition that he had had since he was a child and the fatal consequences of it going untreated if he made the film. Nevertheless Troisi went ahead and made the film with him becoming ever more frail as the shoot progressed. Eventually on June 4th 1994 just a few days before the film wrapped he passed away.

Troisi had been determined to make the film but as production went on it took its toll on him with the final part of the film having to be hastily put together from footage shot without him but using lines he had recorded from his sick bed.

It was an emotional end to to a final few days of the shoot for the crew knowing that their star had died but Radford pulled it all together with a score that was rounded out by the  unforgettable Luis Enrique Bacalov’s (Kill Bill, Django Unchained) Oscar®-winning emotional score. The enigmatic Phillipe Noiret does a grumpy but compassionate Neruda to perfection, while Troisi exudes a child-like simplicity of heart, mind and soul whilst never being over sentimental.The duo’s seductive charm coupled with Radford’s apparently unobtrusive yet inspired direction permeates this beautiful and thought-provoking story

Radford had originally approached Ennio Morricone about composing the score which he recounts below.

The film, when it was completed was picked up by Miramax and a certain producer called Harvey Weinstein who seeing its awards potential couldn’t resist tinkering with it.

Weinstein knew how to run a marketing campaign though and Il Postino was nominated  for two Academy Awards and BAFTA’s including a posthumous one for Troisi as Best Actor as well as one for Best Adapted Screenplay and for an art house film Il Postino would go on to make over $21m in the US alone.

Il POSTINO IS RELEASED ON DUAL FORMAT ON 15th OCTOBER 2018