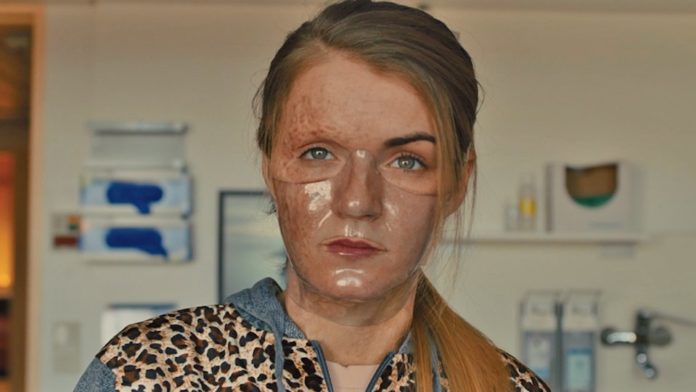 It’s right that legislation is now in place for perpetrators of acid attacks to have the full force of the law thrown at them with seriously heavy duty prison sentences and Dirty God is the first film to deal with the consequences of such attacks. Starting with the camera panning across an extreme close up of scar tissue the film sets out right from the start just how awful acid injuries are. The scar tissue here belongs to Jade a young single mother dealing with the after effects of an acid attack by a former boyfriend who is now rightly banged up in prison. Leaving hospital after another check up Jade’s understandable frustration with the slow healing process is only exacerbated when she’s told that that scars that cover her body and face are permanent. 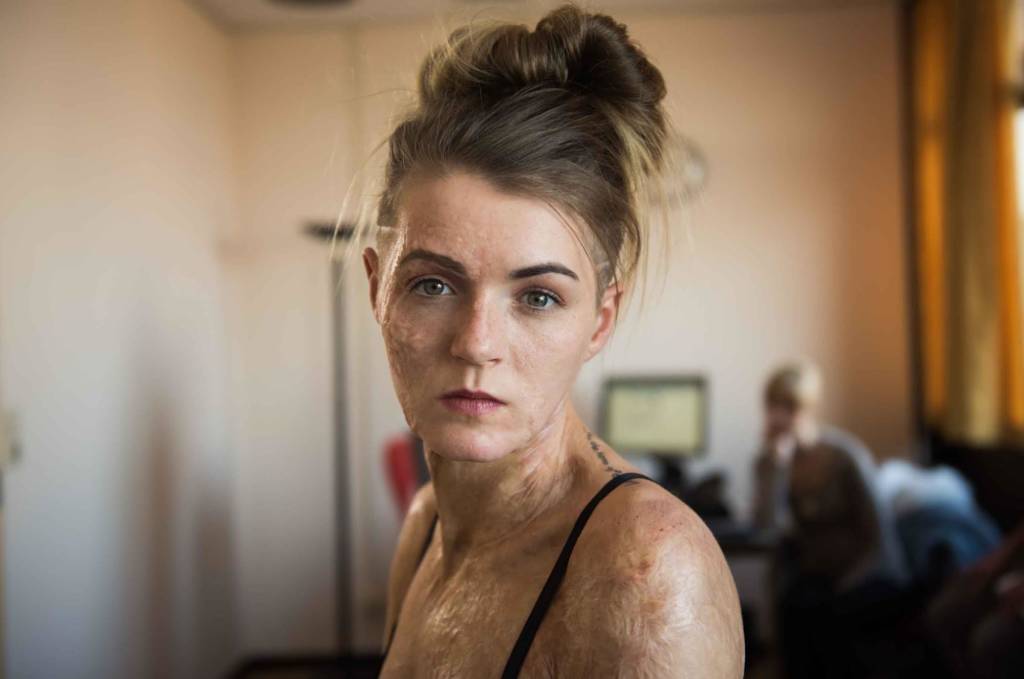 Her upset is further compounded when her own daughter, a toddler who is looked after by her mother Lisa (Katherine Kelly), refuses to go near Jade frightened by her mum’s appearance and you can’t help but feel outraged on her behalf that someone has irreparably ruined a mother–daughter relationship because of the consequences of a criminal act which took a moment to carry out yet will last a lifetime.

Newcomer Vicky Knight, herself a real life burns victim from a fire when she was young, is superb as Jade  and it’s no easy role and difficult enough for an experienced actress to put themselves through in some very intimate scenes. The story of a young woman used to all the freedom and activities of someone that age quickly finds how restricted her life becomes due to the insensitivity of others as she struggles to maintain the life she had before the acid attack. So the clothing she used to wear when she went out clubbing is limited as it now reveals all too much of the extent of her scarring. She keeps herself in the shadows of the nightclub to hide her disfigurement and finding that the attention she used to get from men has all but disappeared she resorts to online webcamming. It’s this that makes for, at times, awkward viewing and for an inexperienced actress with intimate scenes where director Sacha Polak shows Jade interacting with the guys on the other end of the webcam here indulging in the sort of activity most schoolboys use the internet for with ‘specialist interest websites’ and which our Editor euphemistically terms ‘European art films’ (‘You’re fired!’ – Ed).  It’s a really bold and brave performance from Vicky Knight in scenes which don’t spare any blushes even to the point where Jade’s mum walks in on her, ‘mid-entertainment’.

Only too aware of her appearance there’s a moment when Jade finds solace by wearing a hajib that covers her whole body and face and there’s an irony as she revels in the freedom the restriction of the hajib gives her as she dances wildly on her own without fear of anyone judging her appearance unless you’re a member of UKIP. But its short lived as she determines to earn money for surgery in a desperate and expensive bid to get her looks back.

Apart from Vicky Knight’s stand put performance Dirty God also has as her mum Katherine Kelly who was great in Coronation Street as a bit of a slummy – mummy and Dirty God sees her play a slightly older version and the pair make a wholly credible on screen mother-daughter double act and the film is rounded out a by a very good supporting cast too.

This is a low key, low budget independent film with a star making performance by Vicky Knight and is a reminder that once the horror headlines of acid attacks are forgotten the victims lives are irrevocably damaged in one of the best films so far this year.