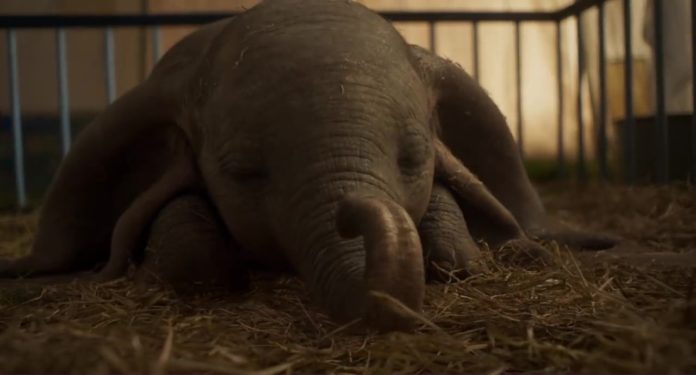 The story of a big eared elephant clumping around trying not to fall over its ears turned out not to be the story of Gemma Collins appearing in Dancing on Ice but the 1941 Disney animated classic, Dumbo, (although the name is still the working title for the Collins documentary). With the studio plundering its back catalogue of animated films to make live action versions has proved extremely lucrative with The Jungle Book pulling in a fortune as has Beauty and the Beast , Cinderella and so many others now it’s Dumbo’s turn, a film beloved by many. The story of the big earred baby elephant separated from his Mum at the circus, befriended by a mouse who gives him the courage to overcome his appearance when he finds he can use his wings to fly also proved a warning for Gary Lineker to stay out of the wind. 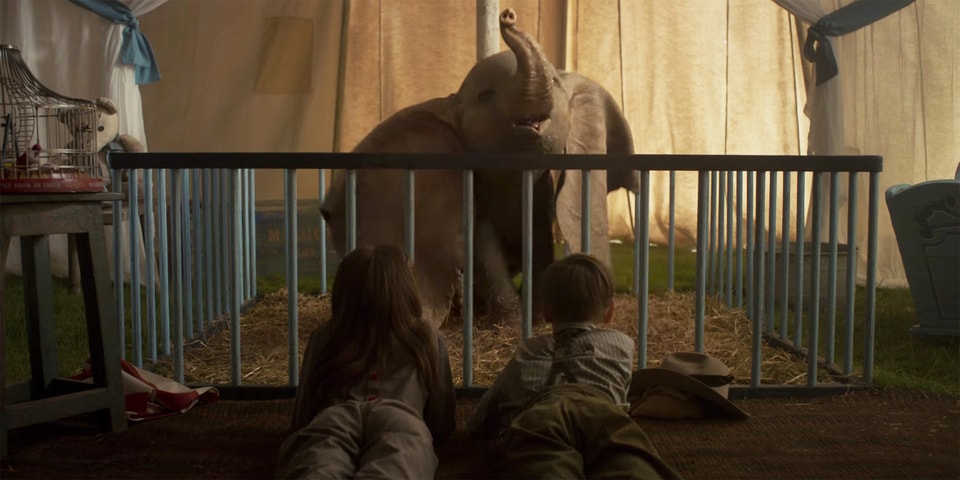 But this is Tim Burton’s take on the classic tale, a director better known for his gothic sensibilities and he seems an unusual choice to helm the project and is written by Ehren Kruger better known for his Transformers scripts and Hollywood remakes of The Ring 1 & 2. Holt Farrier (Colin Farrell), a circus performer returning from the war is greeted at the train station by his two children Milly (Nico Parker) & Joe (Finley Hobbins). Much as he’d love to hug them he lost an arm in combat which in turn means he’s unable to do his circus act and is reduced to looking after the elephants. It’s the circus’ new purchase of an elephant that promises to be a new attraction until it turns out to be give birth to a baby with freakishly large ears which circus master (Danny de Vito) is appalled at not knowing what he can do with such an animal believing audiences will be not be interested. In fact his audiences turn out to be brutally insensitive pouring scorn and abuse on the poor baby elephant when his ears break loose of a bonnet they get him to wear. With an angry protective mother outraged at the treatment she goes on the rampage literally bringing the house down that leads to arguably one of Disney’s great tear jerker moments. Locked and manacled in a truck it’s a heartbroken Dumbo who goes to see his mum able only to make a connection with their trunks all set to the heart breaking, ‘Baby Mine’. In the original it has an audience in tears vying with the death of Bambi’s mum as Disney’s greatest weepy moment something which Spielberg acknowledged using the scene in his comedy ‘1941’ where a battle hardened army general watches it in floods of tears. Except here it whisks by in a moment barely registering and failing to even raise moisture to the eye. It’s the first sign that something’s not right with this version.

So when his Mum get sold off that Dumbo finds his only friends are the two children who play with him and he accidently ingests a feather they’re playing with that he shows his ability to fly and the circus master realizes he has a crowd puller that sells out. Inevitably its big business and V. A . Vandevere  (Michael Keaton) who rocks up to DeVito’s beleaguered circus and swallows it up in a financial deal in what inevitably will be to the detriment of everyone. It’s here’s that Dumbo really does diverge from the beloved 1941 version with the latter half of the film focusing on Dumbo now being trained to be ridden by trapeze artist Colette (Eva Green) in Vandevere’s huge circus / theme park a sprawling empire which plays like a thinly veiled dig at the Disney theme park themselves and it’s a surprise that this sneaked under the studios radar. It’s Dumbo being coerced into performing so as to be reunited with his Mum which runs in parallel with the children, whose mother has passed away whilst their Dad was at war, with Colette now emerging as a mother figure to them.

Despite high productions values, a good cast and an singularly good director when he’s at the top his game this is a rare misfire for Disney with Burton bringing his stock troop of actors (except, for once, Johnny Depp, who we’re sure was trying to persuade the director that he could play the part with two kites an a garden hose taped to his head). Colin Farrell’s role is underwritten, Keaton does his duplicitous schtick well as does DeVito and Eva Green bizarrely sounds like she’s switched accent half way through. Alan Arkin as a banker looking to invest in the circus watches it all non–plussed from the sidelines and says, ‘This is a disaster’ which is a little too strong but it’s certainly a disappointment. Not only is the ‘Baby Mine’ sequence fluffed but the giddily hallucinogenic Pink Elephants on Parade sequence is given even less screen time with a throwaway moment of circus performers blowing bubbles that form vaguely ominous elephant shapes. Maybe it’s because in the original this was instigated by Dumbo having gotten accidently drunk but it’s not the only thing that’s reduced or wholly discarded. The songs are gone, so is Timothy the mouse replaced instead by the 2 children, modern sensibilities towards circus animals are appropriated despite the film being set in a time when animal welfare in such environments was not a consideration. The film has ballooned from a 63 minute animation to a 112 minute live action fest with a CGI Dumbo that’s not as convincing as the animals seen in Jon Favreau’s Jungle Book.