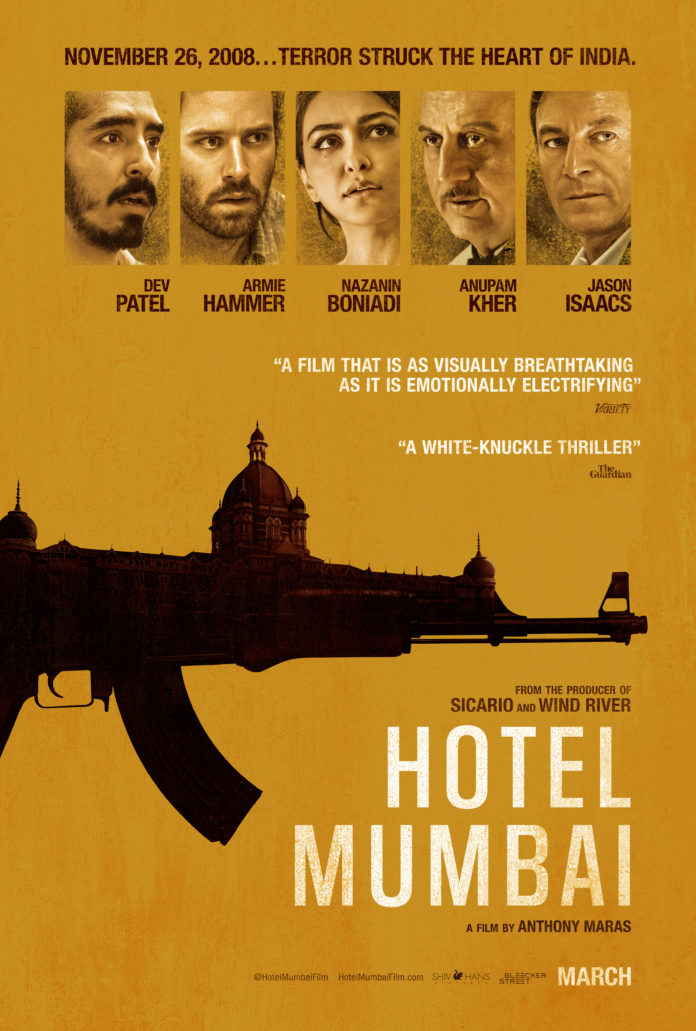 We’ve stayed in some pretty ropey hotels in our time none more so than the one we stayed in for a press junket some years ago. It was so rough they stole our towels. Thankfully that was as nothing compared to what the staff and guests of the Taj Mahal Palace Hotel endured on 24th November 2008 when a gang of Islamic terrorists carried out a marauding firearms attack that lasted for three days and is now shown in this weeks new release,  Hotel Mumbai.

It’s a low key start as the 10 man gang approach Mumbai by inflatable dingy and then instructing taxi’s to take them to a number of locations all the time listening to the mastermind  behind all of this orchestrating it from afar and instructing them to carry out the killing starting with a train station and director Anthony Maras initially spares the horror showing only the admittedly upsetting aftermath.  This is Maras first feature length film and he’s clearly more than familiar with the tropes of disaster movies which sits a little uncomfortably with the true life atrocity were 170 people were murdered. So in that respect he sets up several main characters  – a waiter played by Dev Patel, a young couple (Armie Hammer) with their baby and nanny and a Russian business man (Jason Isaacs) and whilst they are either fictionalized or amalgams of several people they are there to ramp up the emotions which is led primarily by the baby and their efforts to keep him quiet as the armed Islamic gang stride from floor to floor, room to room executing the inhabitants in callously brutal fashion.

It’s what makes Hotel Mumbai at times a hard watch because it is unflinching in its depiction as the terrorists shoot the staff and guests and the casual brutality is shocking. So when it comes to keeping that baby quiet the tension is high almost unbearably so and there are some very effective set pieces in what becomes a cat and mouse game as the guests hide and try to evade the marauding terrorists.

Hotel Mumbai is not without its faults because though much is made of the heroism of several of the hotel staff the film primarily focuses on the white leads struggling to survive with the Asian victims almost an aside.  And that stock line for a disaster movie, ‘You’ll be safe here’ is uttered, the law of cinematic tropes means you know how this will end for them and it sits uneasily in a true life story of such an atrocity. Inspired by the 2009 documentary ‘Surviving Mumbai’, itself a very good documentary, it does prompt the question as to why a dramatized film needed to be made but the drama does humanize it whereas the documentary format presents it as cold facts. But that doesn’t take away from what is a decent if slightly overlong film about yet another Islamic terrorist attack that if nothing else ramped up the world’s security services in preparation to be able to quickly deal with any marauding terrorist attack as seen by the brilliantly effective manner that the Met’s firearms officers dealt with the 2017 Borough Market attack arriving on scene within minutes whereas the Indian security forces took days to turn up,

Hotel Mumbai will undoubtedly have its naysayers alleging it is exploitative making a true life into a disaster movie and everything that comes with that but it’s not an always easy film to sit through and Maras has made a decent if shocking film.