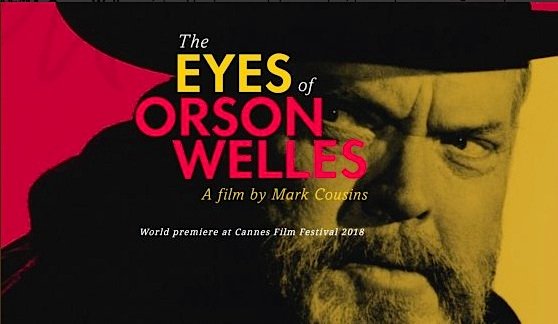 By the end of his career the cinematic colossus that was Orson Welles had been reduced to doing commercials for port and cigars with the final ignominy being him voicing Unicron in a ropey 1986 adaptation of kids cartoon Transformers: The Movie. It was an appropriate movie title because he had transformed himself from writing, acting directing genius to a corpulent commercial sell out. The Eyes of Orson Welles sets out to put the record straight with film critic and documentarian Mark Cousins who has gained access to the directors private notes and copious drawings & painting which Wells had drawn constantly throughout his life. His sketches were something that the world’s greatest artists have done themselves in preparation before producing their own masterpieces. With Welles it came to fruition with his films. Welles debut feature was Citizen Kane regularly cited as the greatest film ever made. So where could Welles go from there and as is seen it was a slow but almost inevitable decline. His second film ‘The Magnificent Ambersons’ was taken out of his hands and butchered as was 1958’s Touch of Evil. Welles career was a constant battle with films never coming to fruition through lack of finance, being shut down or just being taken out of his hands by the studios and these stories are fascinating in themselves  and The Eyes of Orson Welles has flashes of just what potential masterpieces he was capable.

Instead The Eyes of Orson Welles focuses on his influences and the documentary is divided into six oddly titled chapters – What’s in the box? Pawn, Knight, King, Jester and bizarrely Bees make Honey and it’s a typically Mark Cousins film through and through. Cousins is undoubtedly a supremely knowledgeable film historian and his knowledge of minutiae is incomparable and The Eyes of Orson Welles is narrated by Cousins in a style that suggests he’s talking to Welles personally asking questions to which Cousins will never get an answer. The Eyes of Orson Welles plays like a Master’s thesis but unfortunately as much an expert as Cousins is he’s no narrator. His drawling, drawn out, intense and overwrought delivery in his Northern Irish brogue is interminable and throughout the film comprised of clips and Welles art has Cousins voiceover and the same studio portrait of Welles staring out almost in disbelief as Cousin drones on with his rhetorical questions.

Apart from film students and die hard film fans Welles, who died in 1985 at 70 years of age, was undoubtedly a genius but there’s little new information revealed here (though one stand out clip is the actor transforming himself with make up and his obsession with changing the size of his nose) will certainly not be engrossing enough for those new to his work to want to discover his back catalogue. It’s a shame as Cousins passion is both sincere and absolute but he’s the sort of voice that jostles with white noise on the Top Ten irritating sounds chart and the documentary needs cutting down from its two hour running time. The Eyes of Orson Welles is unlikely to direct a generation to watch Welles early great films and if Cousins really wants to redeem himself if he could find the missing footage of The Magnificent  Andersons and restore the film as Welles had intended.