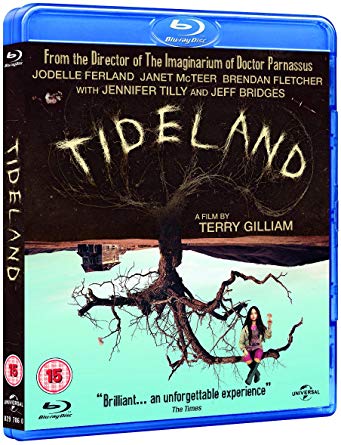 ‘Alice in Wonderland meets Psycho through the eyes of Amelie’,  is how writer director and ex Monty Python member Terry Gilliam described his tenth feature film Tideland back in 2005. Adapted from the cult novel of the same name it’s easy to see the appeal for Gilliam of a story that’s told through a child’s eyes. After her mother (Jennifer Tilly) dies Jeliza-Rose’s (Jodelle Ferland) drug addled father (Jeff Bridges – Kingsman : The Golden Circle) , an ex rock star,  whisks them off to a derelict farmhouse where he promptly OD’s and dies too. Bereft of any emotion about the death of her parents Jeliza withdraws into her own dark fantasy world using dolls heads on the end of her fingers as friends but soon finds the influence of her odd neighbours turning her day dreams ever darker.

Gilliam had made Tideland during a hiatus of The Brothers Grimm production and was in the middle of another battle with a studio this time it was with Harvey Weinstein. The pair of films had been the first he had made in seven years after Fear and Loathing in Las Vegas had flopped.  Like that film Tideland too has a loose narrative and it’s a problem with many of Gilliam’s films that though his visuals are at times like nothing else you’ve ever seen its often at the expense of the narrative and surprisingly there’s little drama to be had her. If anything the first thing audiences would be wondering is how Jeliza manages to avoid social services even being aware of her circumstances (although if it was Islington social services it wouldn’t raise an eyebrow).

But Tideland is Gilliam all the way through with its wide angle lens shots, close ups, expressive camera work and shifts between the amusing and the grim and is perhaps one of his most personal films. However it’s also one of his lesser films certainly not on a par visually with Time Bandits or as emotionally satisfying as The Fisher King or prophetic as Brazil, perhaps his greatest film.

But the big plus with this disc is that its from Arrow films who excel at releasing discs with a superb array of extras and Tideland is no different. For Gilliam fans the disc is a must containing an intriguing 45 minute film behind the scenes of the shoot of the film and showing that despite Gilliam having garnered an unenviable reputation for going over budget and therefore making it difficult for producers to find an insurer to underwrite his films. The problems that beset his productions or ‘the Gilliam effect’ as insiders call it is not always his fault. So here we see how his first day’s filming is ruined by the laboratory spoiling the first days film processing. Add to that the inclement weather where his exteriors are shot in bright sunshine one moment and the following day it’s blowing a gale with cloud cover ruining continuity.

There’s a commentary by Gilliam & screenwriter Tony Grisoni, with the director’s infectious giggle throughout. Add to this an insightful featurette on the green screen aspect of the filming plus interviews with producer Jeremy Thomas, himself no stranger to troublesome productions, as well as with the cast and some deleted scenes, B- roll footage and also the usual trailer and stills gallery which all adds up to another great release by Arrow who did the same with Gilliam’s Time Bandits a few years ago. It’s a shame that the other studios don’t put as much into their discs as Arrow do.

So whilst Tideland is not Gilliam’s best film the extras make this a worthwhile disc for aficionados of the director.

Tideland is released on Blu ray on 13th August 2018