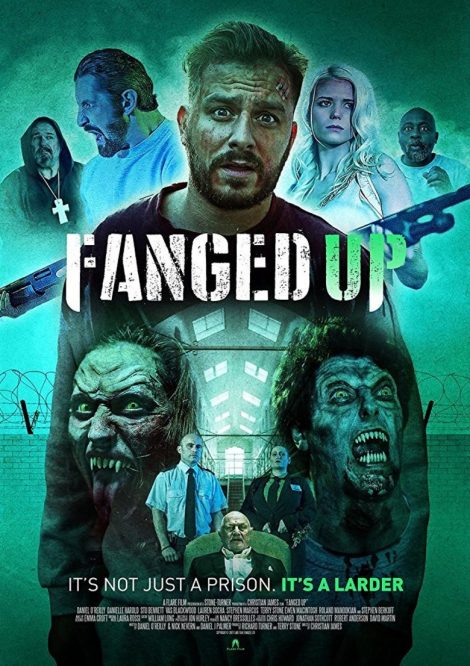 In fairness to producer Jonathan Southcott he’s assembled some impressive actors for his films whether it be Ian Ogilvy in ‘We Still Kill the Old Way’ or Dexter Fletcher in ‘Age of Kill’. Unfortunately his films don’t always match the calibre of some of the cast and Fanged Up with its pun stretched title is one of those. Despite having landed Steven Berkoff, who for such a respected actor has made some pretty odd film choices in the past (Rise of the Footsoldier Part 2, Strippers v Werewolves),  the lead role here is played by Daniel O’Reilly whose alter ego was Dapper Laughs a laddish comedy creation with no self awareness making less than subtle nob gags.

Though O’Reilly’s character here is Jimmy Ragsdale it’s Dapper Laughs in all but name and finds himself arrested and sent to prison before appearing in front of the local magistrates, a plot point which bears no relation to police procedure. A low budget film, as seen with police officers who the costume department appear to have dressed in uniform from the local fancy dress shop and police vehicles which are from the 70’s, the film doesn’t scrimp on the gore.  The gore being instigated by the fact that the prison is run by vampires using the prisoners as a ready food source. It’s a plot not that different from the far superior ‘From Dusk til Dawn’. It’s the films selling point that some of the gore is extremely well done with heads exploding and blood being sloshed about like the Editor’s pint at closing up time at The Nag’s Head.

Daniel O’Reilly, who co writes the script, had said in 2011 that the Dapper Laughs character had been indefinitely retired due to a number of controversial remarks he made notably during a stand up routine where he told a female member of the audience that she was, ‘gagging for rape’. ITV2 cancelled his TV series almost immediately and others quickly distanced themselves from him. Having started on social media he was soon to find that comedians like Frankie Boyle and Ricky Gervais could make better, funnier jokes about such subject matter.

Whilst his character Jimmy Ragsdale strides around a night club trying to pick up women whilst giving the impression he owns the club it’s clear that he’s just a watered down version of Dapper Laughs . At 34 years old O’Reilly just about manages to convince as the lad at large and his love interest here is ex-Eastenders actress Danielle Harold who’s easy on the eye Dr Makepeace sees her soon revert to cockney curses, F-ing and blinding like an East End barrow boy arguing with a Pearly King.

Apart from Steven Berkoff Fanged Up also has some well known faces rather than well known names. So if we say Ewen Macintosh few will know the actor unless we say Keith from The Office, a moniker which he seems destined to be stuck with for the rest of his career. Added to this is Vas Blackwood as Shifty a charming prison fixer who’s far more convincing in this role than the less than threatening  villain he played in ‘Lock, Stock and 2 smoking barrels’. Even page 3 favourite Lucy Pinder appears fleetingly, though to the disappointment of her fans, she is clothed.

Gory and at times inventively macabre Fanged Up fits firmly in the Saturday night with a six pack, a pizza and your mates .

Here’s the Fanged Up trailer…….