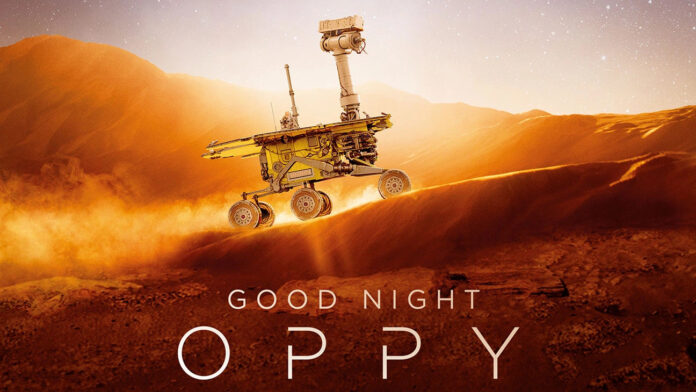 Good Night Oppy follows a Wall-E like NASA robot through a grim wasteland bereft of atmosphere. Not as we thought, Hull but actually the planet Mars. Award winning director Ryan White’s documentary looks at the NASA robots Spirit and Opportunity that were sent on a mission to Mars way back in 1993 to explore the surface and relay live pictures. It had never been done before and the engineers and scientists had a narrow window to build the robots due to the imminent alignment of planets making it an optimum time to launch the rocket to send them there. The robots were only expected to survive for 90 days before sitting down. In the end though Spirit did falter it was Opportunity, the Oppy pf the title, that far outlived expectations lasting as it did for 15 years sending invaluable pictures back on a daily basis.

What Good Night Oppy does is reveal an understandable love the NASA teams developed for Oppy and director White certainly anthropomorphisizes them to the max so when that moment comes when the robot does inevitably shut down and they have to finally say, ‘Good Night Oppy’ it’s understandably an emotional moment. Much of this is also due to the scientists who speak about their own involvement in the project and coming across as proud parents to their child. All the scientists are presented as empathetic and engaging and their love of appropriate pop tunes used to inspire the teams as they begin their round the clock work is a highlight.

Oppy’s adventures on a famously harsh planet with barren landscapes and extreme weather conditions are all recreated by photorealistic footage created by ILM (George Lucas’ renowned special effects company) and it adds immeasurably to the experience and alternates with NASA’s own footage taken right from the very start from the construction of the robots to Oppy’s demise 15 years later. On occasion it is a little sentimental but this is very much a celebration of human achievement albeit at the expense of billions and billions of dollars and might have some asking why we’re looking at going to Mars when the money should be spent on saving out own rapidly deteriorating planet

There’s always been the quest to find out if there’s life on Mars and rumours that the robots will be re-built so as to complete the same mission in Hull remain unfounded but in an age of witless influencers more interested in plastering their faces over social media the documentary shows that there are young people who want to do something more constructive and contribute to humanity and in that respect Good Night Oppy is also inspirational.

We chatted with director Ryan White about the making of Good Night Oppy …..