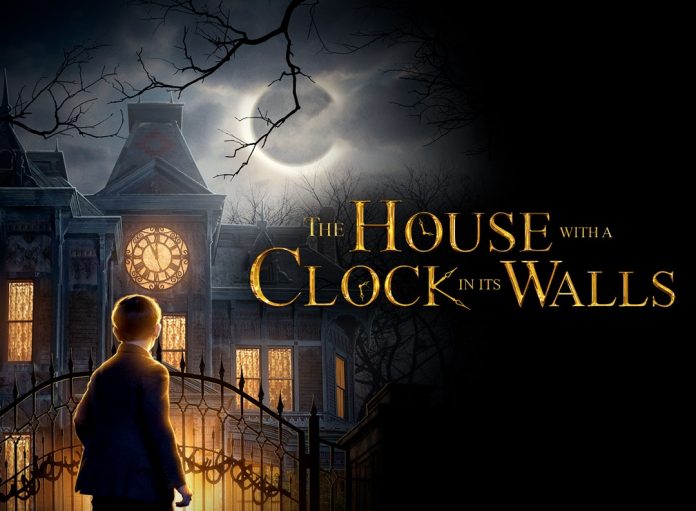 The latest addition to the does-what-it-says-on-the-tin is The House with a Clock in its Walls based on the John Bellairs kids novel about a house with a clock that is in its walls. Lewis (Owen Vaccaro) is whisked off to stay with his Uncle Jonathan a characteristically bubbly Jack Black who, unknown to his nephew is a warlock , though frankly with an armchair that can move itself and all manner of other magical shenanigans it should have been no surprise. Black shares the palatial gothic mansion with his stick thin sister Florence (Cate Blanchett – ‘Ocean’s 8‘) and they have the best dialogue as they constantly bicker and hurl insults at each other.

Taking Lewis under his wing Jonathan teaches him some magic which in turn helps him to settle into his new school where he is an outsider easily bullied highlighted in a scene that many will know as Lewis finds himself last to be picked for the sports team in gym lessons. Lewis, keen to make friends, uses his knowledge and a book in his uncle’s house that has been locked away, to raise the dead to impress a would-be friend. Unfortunately it turns out to be the deceased magician partner of Jonathan when they had a stage at who is set on bringing about the end of civilization and its all tied to their house with a clock in its walls. The deceased magician is played by Kyle MacLachlan who still needs a breakout role to equal that in Twin Peaks and has one of the greatest underated horror films in his back catalogue, The Hidden, which is ripe for remaking.

The film is chock full of scares that some kids may find too intense but most will revel in notably an attack of vomiting pumpkins.  That mix of horror and at time slightly icky laughs comes courtesy of director Eli Roth whose normal output is never known to be anything less than excessive but here he tones it all down , so mercifully we never get the full on body horror of The Green Inferno though he’s been unable to resist a small cameo having left The Meg after he was rumoured to want to play the lead.

With Halloween not that far off the house with the clock in its walls Roth balances magic , mild horror and jokes in a perfect blend for kids who would be traumatized by Roth’s normal horror output.