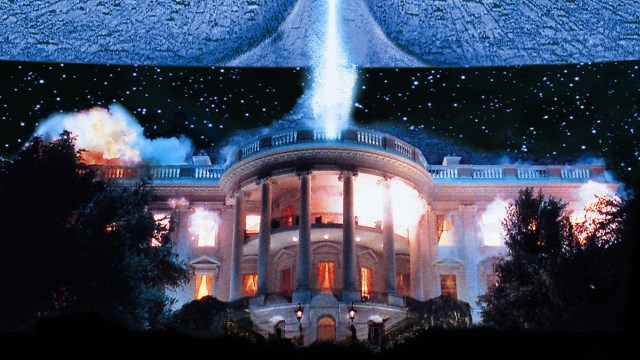 Even back in 1996 Independence Day was seen as something of a B-movie but with ground breaking special effects none more so than the drop your jaw blowing up of the Whitehouse by a giant overhead spaceship. Shown during the Superbowl interval it had audiences stoked for the summer blockbuster.  But that blowing up of the Whitehouse in a trailer was made in the early days of CGI. We sometimes make a combination of a model, motion control, photographed models for the foreground and then go digital, CGI in the background,” Emmerich explained

And so it was that miniature model maker Mike Joyce and his team built a $50,000 fourteen feet wide and five feet high meticulously detailed plaster model built of the Whitehouse to such a degree that the effects team were loathe to blow it up. The studio were not keen on it either with the Oklahoma bombing having occurred in 1995 it was regarded as just not a good idea.

Standing on a wooden platform their Whitehouse model was built of thin blocks of plaster so that when the explosion went off it would utterly pulverize the model. It was a one take opportunity only and using nine unmanned cameras within 10 feet of the model shooting at an extremely fast 300 frames per second meaning that when it was projects at the normal 24 frames per second it slowed the one second explosion right down lending the model a degree of gravity and heft to the structure. The digital compositors then added the CGI giant spaceship above the model to produce the films money shot which helped the film win an Oscar for Best Visual Effects

The film would earn $817m making it the biggest film of the year, changed the marketing of blockbusters, made Will Smith an A-list star and catapulting director Roland Emmerich into the master of disaster films