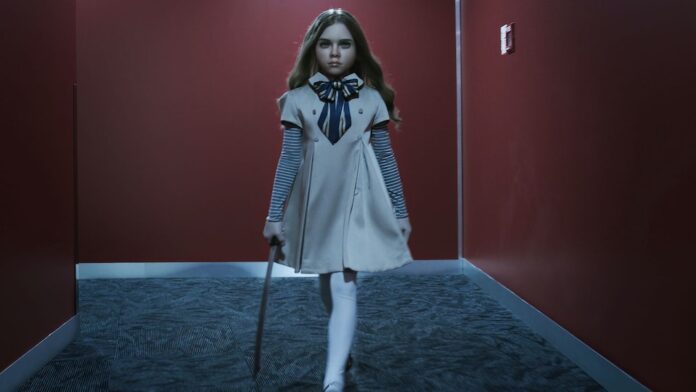 Creating the Model 3 Generative Android – M3GAN doll, for short – for the film required multiple teams from multiple disciplines, including a human actor, VFX, animatronics and puppetry, all working in concert to create a state-of-the-art, one-of-a-kind new horror icon. When director Gerard Johnstone and producer James Wan were workshopping M3GAN, they discussed what makes a creepy doll scary. They agreed that first and foremost, it should feel like a child’s plaything that comes to life. “That’s what Tobe Hooper did so well with the clown in Poltergeist—building the anticipation up that something bad is going to happen, but you don’t know when or how,” Wan says. “To see it have a life of its own is what gives it that creepy, scary element. After much back-and-forth design work and discussion with Gerard, we ended up leaning into making M3GAN more physically realistic. It’s the rare occasion where an ‘uncanny valley’ look actually adds to M3GAN’s creepiness.” 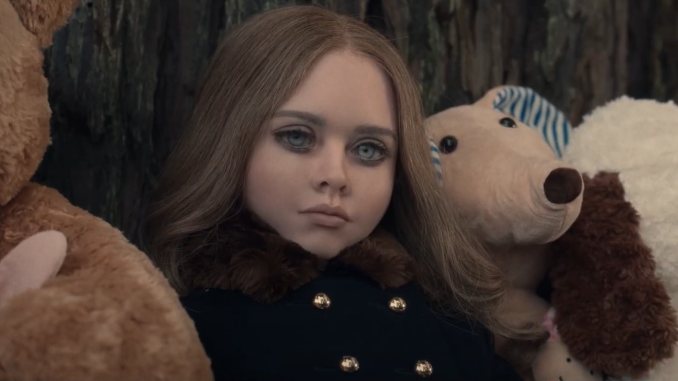 With initial guidance from James Wan, who has experience working with non-human central characters, Johnstone and his collaborators exceeded all expectations with M3GAN. “Gerard did an amazing job infusing her with so much life,” Wan says. “She stands out as a character, and she’s not human. I was so happy to see how he was able to do that in a way where she is endearing and charming one moment…then the next menacing and darkly dangerous. That’s a testament to Gerard and his approach to filmmaking.”

Johnstone wanted the visual impact of M3GAN to be deliberately unnerving. If you look at her from a distance, you think she is real. Up close, her proportions and micro-expressions are a bit off and look more doll-like. Yet, the skin complexion, the texture, hairwork, eyes, eyebrows and lashes are like nothing you’ve seen before. Is this a real person, or isn’t it?

Johnstone had the idea of hiring a human actor to embody M3GAN in the longer shots and in the wider shots. But finding a child actor, of the same physical size as Cady (Violet McGraw), who could do what the role required seemed like an impossible ask. “I didn’t think we’d find anyone who could do what was required, which was to a) move like a robot, b) dance, c) fight and d) do four-to-five-page dialogue scenes and go toe-to-toe with our leads,” Johnstone says. “It took all of us by surprise when our New Zealand casting director MIRANDA RIVERS found Amie Donald straight off the bat. Even though this was Amie’s first acting job, it turned out she could do all of the above and more.”

Movement coach Luke Hawker and stunt coordinator Issac “Ike” Hamon took to calling Donald “a machine.” “Many major stunts they thought they’d need rigging for, Amie could do with a few minutes practice,” Johnstone says. “She was a miracle find, and it’s not an exaggeration to say that there would be no M3GAN without her. To top it all off, she could not have been sweeter—and yet, she still loved doing the creepy, stabby stuff the most.”

From scenes in which M3GAN chases Cady’s bully, Brandon, through the forest to more intimate moments with Cady, it was crucial to blend seamlessly between the animatronic M3GAN doll and the physical performance of Amie Donald. A brilliant team of six or seven puppeteers handled M3GAN’s facial expressions and dialogue. In longer shots, Donald wore a prosthetic face that would later be animated. “For a lot of close-ups, we wanted to keep M3GAN feeling like an animatronic doll,” Wan says. “We had a company called Morot that gave us a lifelike version of M3GAN for her close-up shots. It’s a combination of techniques and methods that brought her to life very successfully.”

We talk predators with Amber Midthunder star of ‘Prey’

A pivotal scene in the film also became an instant meme when the film’s first trailer debuted: a contortionist dance scene in the hallway where M3GAN stalks her prey. Johnstone worked closely with movement coach Jed Brophy and dance instructor Kylie Norris to bring it to the screen. “It was a very entertaining scene to work through in so many ways,” Ike Hamon says. “Amie is such a gifted physical performer, and we found a way to take it from a very quirky, innocent moment to terror. This dance was supposed to throw her victim off quite a bit. It goes extremely violent very quickly…going from serene to full horror.”