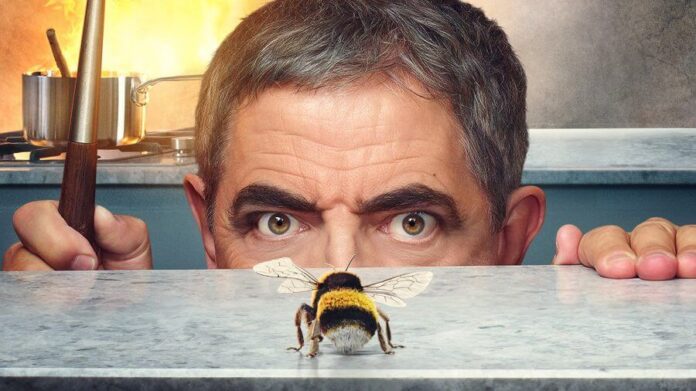 The title of Man Vs Bee could hardly be more simple but, while making the Man was relatively straightforward, creating the Bee was anything but. “It’s a complicated web of things that have to happen in parallel for the end result to feel like it was a smooth and easy process,” says VFX supervisor Rob Duncan. It was decided early on that the bee in question would be a white tailed bumblebee. “Honeybees are more common, but they look too much like wasps,” says Rob. “Bumblebees are big and fat, fluffy and cuddly. Once we had decided that, we built it from the from the inside out, starting with the skeleton then adding all the detail. That was the easy part!” A decision was made early on to opt for realism. While the action may occasionally resemble Tom and Jerry, this is no cartoon.

“We’re used to doing applying personality to a dog, but it’s a lot harder with an insect,” says Rob. “Our interaction with bees is quite ambiguous: we know they’re good for the environment, but we don’t want them buzzing around our ear. It was never going to be a character with a top hat and cane: the audience has to buy in to the idea that this is a real insect, otherwise, there’s no jeopardy. After a while we do start to push the envelope in terms of its behaviour.”

“IT WAS ALL ABOUT SUGGESTION,” adds director DAVID KERR. “YOU CAN IMPLY AN ATTITUDE FROM LITTLE THINGS WHEN IT’S RUBBING ITS LITTLE FEET TOGETHER OR CLEANING ITSELF – TINY BITS OF MOVEMENT THAT READ AS A RESPONSE OR AN ATTITUDE.”

In the meantime, director David Kerr was working on detailed storyboards. “A lot of the shot design was informed by the disparity in scale between a man and a bee,” he says. “You often want two-shots in comedy and really the only way to do that here was to frame the bee in foreground, so the scale of the bee becomes a lot bigger closer to the lens.” With the technical details taking shape, they had to consider how to bring the bee to life on set – the answer came through Sarah Mardel, who had worked with Rob on Fantastic Beasts: the Secrets of Dumbledore. “We partner up with puppeteers and theatre performers a lot because they understand performance and timing,” says Rob. “Actors really like it because they see a kindred spirit – you see the quality of performance go up a notch.” Before taking on the role of Trevor’s adversary.

Sarah spent months during lockdown dangling proxy bee models from two-metre wires on the end of eight-foot poles. “Figuring out how accurately you could land something so small, at a right angle, so far away from you… That was a real test. It was a bit of trial and error, a lot of research and figuring out what you can do with what you’ve got.” Both Rob and Sarah spent long hours on YouTube, researching movements, S-shaped flight paths and bee behaviour, from what being trapped under a cup to recovering from being stunned.

Central to their task was giving the bee an amount of agency without distorting its natural behaviours. “When you’re creating or playing an animal, everything in you wants to make it larger than life or give it this internal storyline,” says Sarah. “For a bee, though, it’s always about intention: going to that bright colour or following that light. You can push the story along and insert tiny vestiges of personality, while keeping true to the actual bee itself.” Following painstaking rehearsals of each sequence, Rowan and Sarah (dressed in black) would do a pass or two on set using the bee on the pole to set Trevor’s eyeline and allow the camera crew to where to aim and focus for close-ups. Rowan would then generally do a take without the bee to assist the post-production process.

The precision and repetitive nature of the work made it a gruelling shoot for all concerned, although there were compensations for Sarah. “Every day, I was working with someone I grew up watching. That was pretty crazy!” she laughs. “Normally I wouldn’t be let anywhere near a camera, but when the time came to do shots from the bee’s point of view, which we called BeeVision, we needed to keep the continuity of the flight path of the bee and also the interaction, whether that was with Rowan or with pixel. I was given a 360-degree VR camera to operate at the end of a two-metre pole, so I could replicate the flightpaths that bees generally take.”

“THE OBVIOUS CHOICE FOR BEEVISION WOULD HAVE BEEN STEADICAM OR A DRONE,” ADDS ROB DUNCAN. “THE PROBLEM IS THAT YOU CAN’T GET STEADICAMS TO GO FAST ENOUGH OR TO INTO THE SMALL SPACES WE WOULD HAVE NEEDED FOR THE BEE TO AVOID TREVOR, WHILE DRONES CAN’T SAFELY FLY AS CLOSE TO ROWAN AS WE NEEDED.”

Sarah also had to work with Pixel the dog for sequences where Cupcake had to chase the bee, more often than not using the activity as its own reward. “Sometimes she had a treat but actually chasing the bee was exciting enough for her so I would let her have it to play around with. She’d chew them for a bit without causing any damage. If we were using the VR camera, I’d hook a bit of meat on so she had something tasty to chase. Pixel was amazing – a one- or two-take wonder.”

Once Sarah had finished, it was over to Rob and his team at Framestore to overlay the bee and animate it: a task which took around four months from start to finish. The results, say series writer/creator Will Davies, are “a stunning bit of digital sorcery” that both vindicated and helped refine the storytelling through the series. “As the VFX is developed and we got more of our co-star, the story began to really open up,” says Will. “From that point, we could start refining Trevor’s performance and the music and the edit around his co-star. It’s amazing how the presence of something so small can lift everything.”