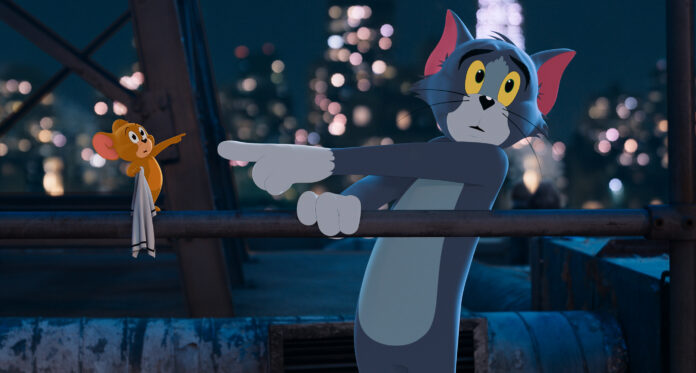 So if you have seen the new Tom and Jerry film (read our review HERE) then it may surprise that despite the animated cat and mouse they also used Tom and Jerry puppets to make the new film.

It was story’s special and visual effects teams who would create the “real” Tom—along with several other reference animals—in the form of various three-dimensional Tom and Jerry puppets as well as Toots, a Spike head, a Bengal tiger head and a life-size maneuverable, collapsible elephant. Using both modern and traditional scaling techniques, each one was initially 3D-printed on a smaller scale before being up-scaled in Plastazote, a polyethylene foam. Tom puppets were made of polyurethane foam with an aluminum armature, creating a full-size puppeteer model to provide instant “reactions” to the cast during shooting, as well as furry maquettes for both leads, manufactured to aid lighting reference on set and volume on camera. Six puppeteers were on hand to operate the faux menagerie. 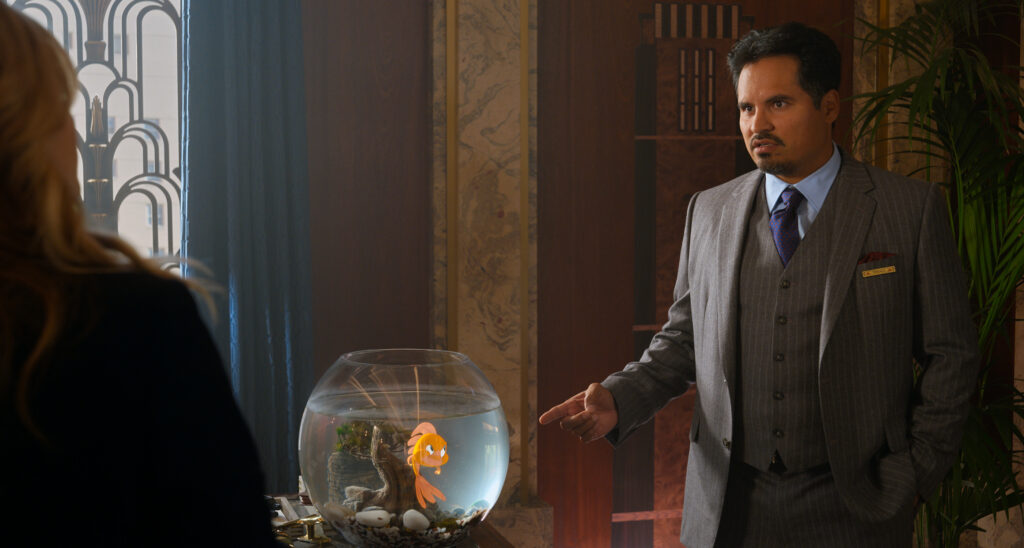 “Normally, when you do a movie like this, you act with a tennis ball,” co star Michael Peña states, “so it was really nice to work with actual puppeteers. It really livened up the interactions in a scene and made you feel like you were communicating to whichever animal, which was much easier to do.” Chloe Moretz, who of all the cast had perhaps the most scenes with Tom and Jerry, agrees. “First and foremost it was a great experience to act opposite the puppeteers!” It also required a little getting used to, and made for comedic moments off-screen, she admits. “It was interesting, to say the least—and never a dull moment!” 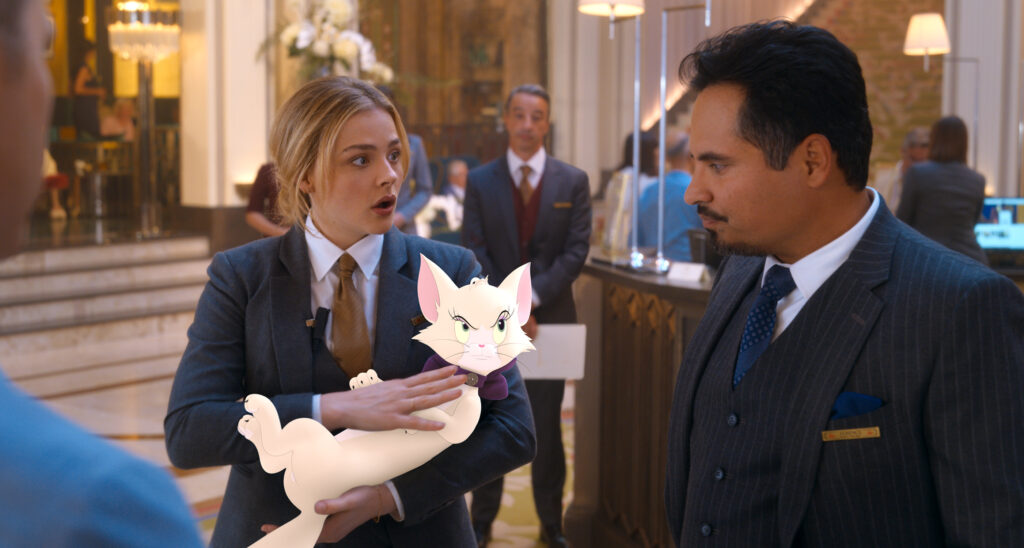 The SFX team also designed and constructed two bespoke elephant rigs to simulate Kate and Ben walking. This was achieved by syncing motors and air-bellows to create the lumbering giants. The motion was especially programmed to the visual effects’ walk cycle. 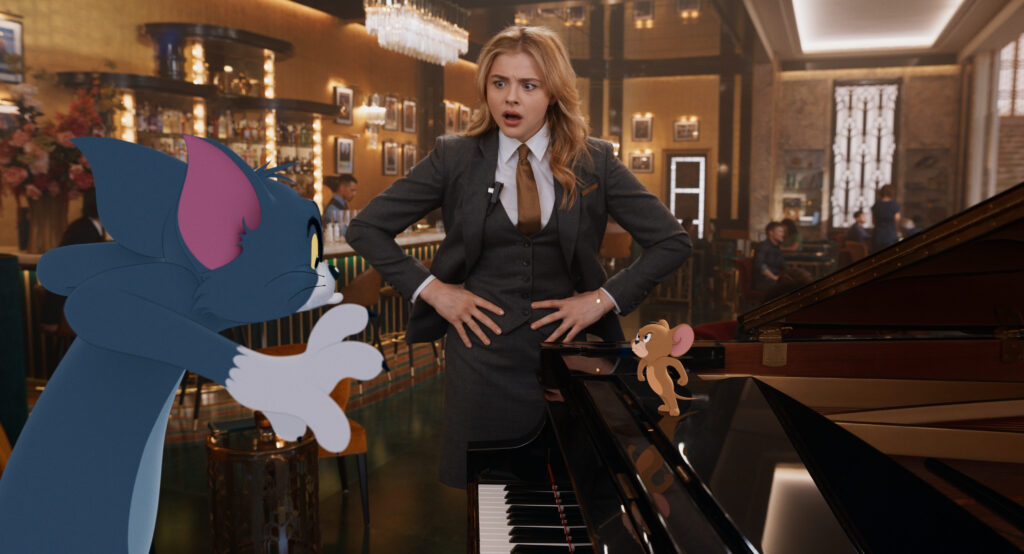 Filming for “Tom and Jerry” took place primarily at Warner Bros. Studios Leavesden, and in two key locations: Battersea Park, London, which doubled nicely for the busier parts of New York’s famed Central Park, including where Tom sets up his keyboard; and about 20 miles outside the city at Fulmer Wood in Slough, which stood in for its woodier, less-traversed areas. For authenticity, an extensive 2nd unit had been mounted in the real New York City, and the design team then matched the locations, ultimately building 47 sets utilizing three stages on the Leavesden backlot. Every environment had to consider both the live-action and animated characters that would be featured within. 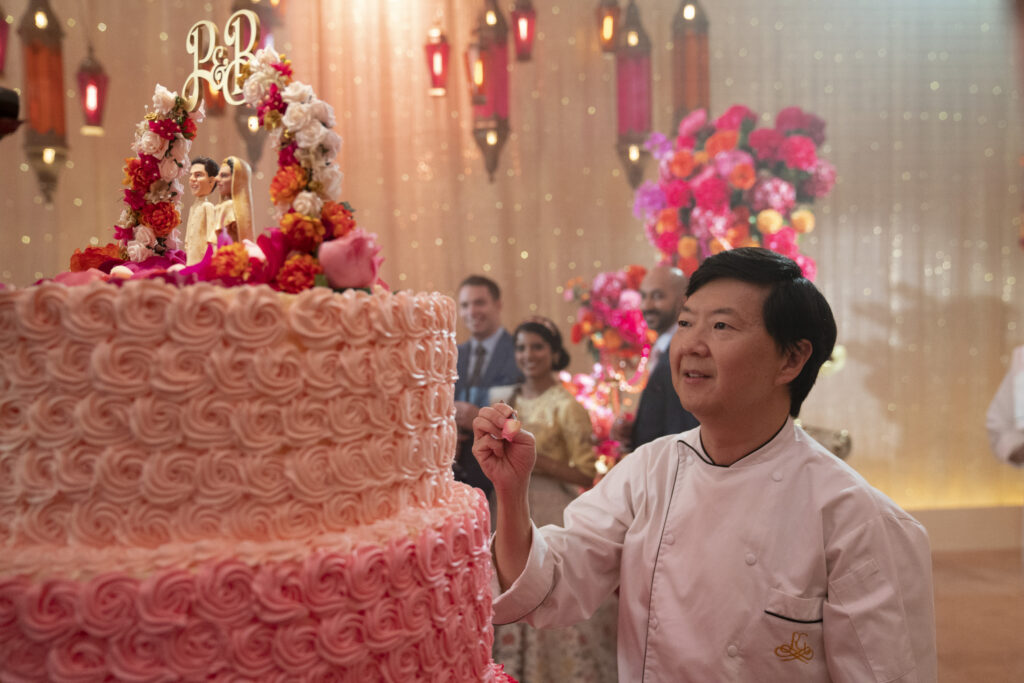 Production designer James Hambidge’s team chose a simple color palette, making sure that leads Tom and Jerry’s pantones were not replicated anywhere they would be featured. They also paid careful attention to such things as the height of furniture, taking Jerry’s small stature under consideration. This they did hand-in-hand with director of photography Alan Stewart, in order to determine elevated camera positions necessary given their “stars” perspectives, or how much more the floor, for example, would be visible. 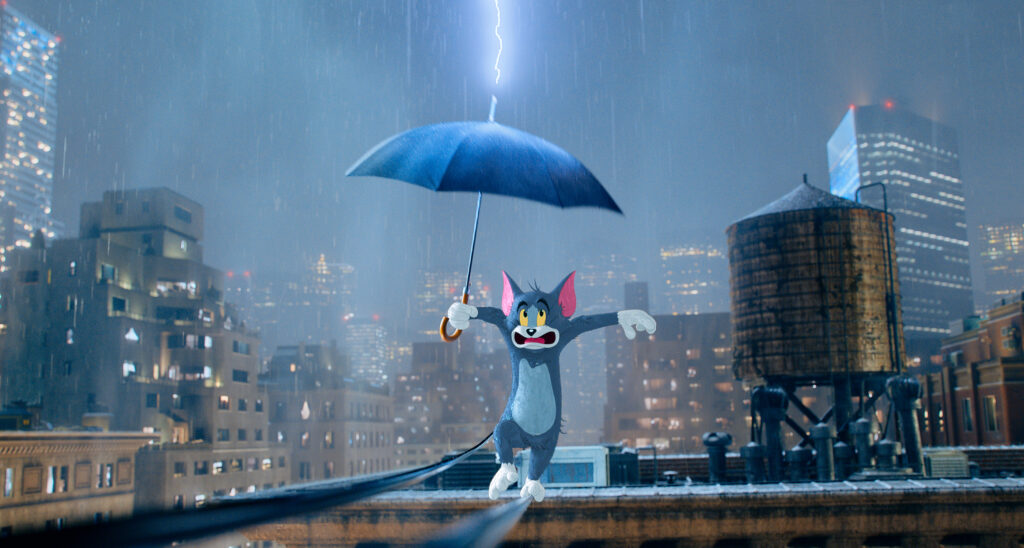 The Royal Gate Hotel, meant to be on par with such real establishments as the Plaza or the Waldorf Astoria, is where most of the action takes place in the movie and therefore required numerous sets. To create the hotel’s main entrance, the design team had just eight weeks to turn the backlot’s 1920s Paris of the second “Fantastic Beasts” film into contemporary New York City. One thing remained, however: the practical steam machine system devised for the previous movie was re-installed under the road to feed steam through the manhole covers, giving Tom and Jerry’s Manhattan a genuine feel.

But befitting of the films two stars the props department created tiny director’s chairs for Tom and Jerry.