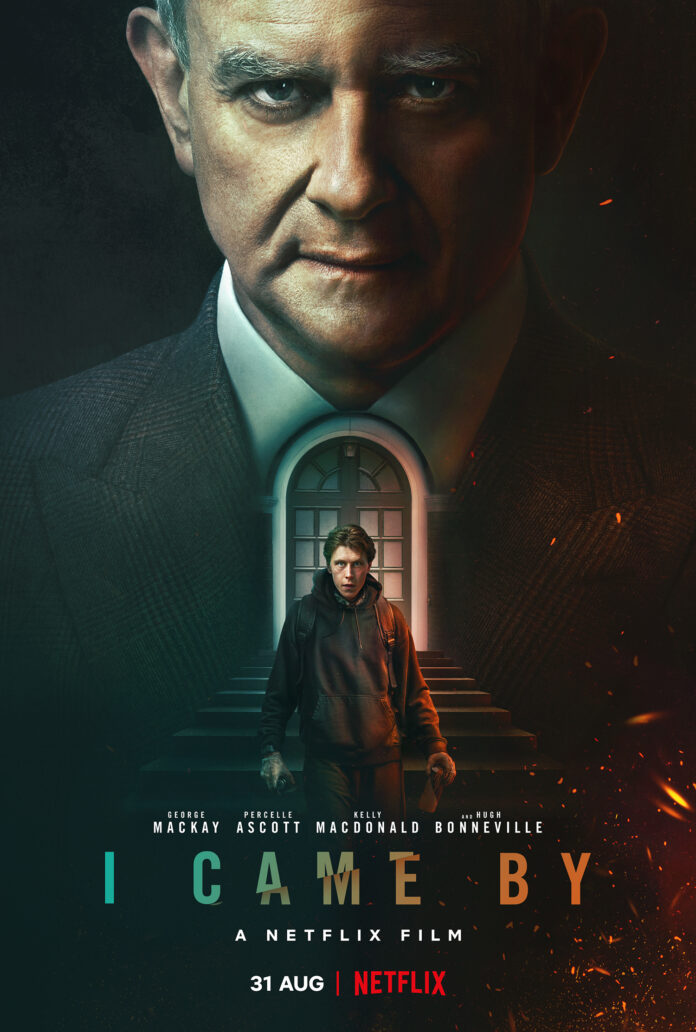 Our Editor would often casually drop into our old office saying that he was just passing by until we pointed out that he worked there but here, ’I Came By’ is the tag of a pair of graffiti artists Toby (George Mackay) and Jay (Percelle Ascott) who break into the homes of those they perceive as privileged and spray the three word tag across a wall as a some sort of protest. Achieving some sort of notoriety a youtuber runs a channel discussing their activities under the banner, ‘Meaningful or Mindless?’  Frankly it’s more likely to elicit the response of urging them to practice their art in those adult colouring in books. Toby is particularly irksome being the sort of pasty faced white male who speaks in an affected street patois when in actuality he comes from a well to do middle class background and here his mother is Kelly MacDonald a psychiatrist who comes home from work to a belligerent and moody teen more akin to Harry Enfield’s Kevin the teenager than the social justice warrior he thinks he is. ‘Everything is true – everything is permissible’ is sprayed on his bedroom wall a phrase that would be more in keeping written as a Latin family motto written above Boris Johnson’s prime ministerial desk. Jay on the other hand sees the futility and pointlessness of what they do and wants to step away from it all now that his partner is expecting their first child.

But Mackay’s character can’t stop himself and sets eyes on the home of Judge Hector Blake (Hugh Bonneville) who’s recently resigned from his post –  an uncharacteristic move from an occupation that notoriously and stubbornly refuse to retire instead remaining in the job even if they’ve died 20 years previously. But Blake, a single man having had his wife committed to a mental health institution, lives alone in large house with a dark secret in the basement – something that Mackay finds when he breaks in to so as to leave his three word tag.

It’s a premise we’ve seen before with ‘Don’t Breathe’ and numerous others but writer-director Babak Anvari’s film is heavily influenced by several of Hitchcock’s best films notably Psycho but with touches of Rear Window and Frenzy too and that’s no bad thing. There are several well orchestrated jump scares that work well on the big screen better than even the largest of TV screens where this Netflix film will mostly be watched. Though Bonneville is the constant throughout the film Anvari has taken the three act structure and let a different character take the lead in each one and this works extremely well. What works less well is the police investigation side of things led by Marilyn Mnadebe’s sergeant a good actress but through no fault of her own finds the script ignoring actual policy and procedure that just doesn’t happen in order to advance the plot and chooses to avoid letting  a judge, whose knowledge of the law would have had him pulling up the officers at every turn and would have been instigating allegations of harassment specifically against Kelly MacDonald’s mum frantic with concern for her son’s disappearance.

Nevertheless this is an engrossing thriller with Hugh Bonneville compellingly odious in a role that is countered by the always good Kelly MacDonald as the mother with frayed nerves determined to uncover whatever he is hiding.