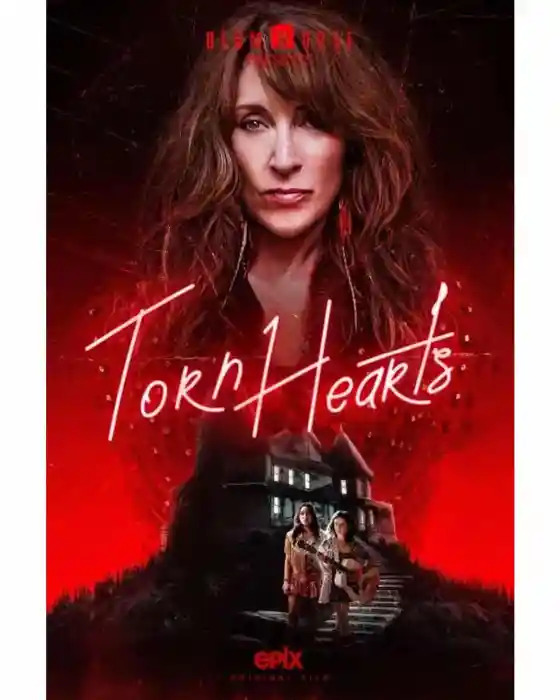 The 2019 film ’Lords of Chaos was the true story of murder committed in the name of the Norwegian black metal scene but it was nothing compared to the true horror of the music industry-  that which is known as Country & Western as anyone who has listened to a Billy Ray Cyrus album will surely testify.  It’s a music that seems to have two staples – the wife running off or the dog dying……. or the wife running off with the dogs’ ashes. So the horror of the music genre is one that’s been overlooked by the horror film community until now where Blumhouse productions run with newcomer Rachel Koller Croft’s script for Torn Hearts. The title refers to a C&W duo Leigh (Alexxis Lemire) and Jordan (Abby Quinn)  singer and songwriter respectively trying to break into the scene and performing at an open mic spot only to learn afterwards from their manager that a star of the C&W scene was in the audience looking for a potential opening act to join his tour.

Despite Jordan getting jiggy with him they fail to secure the spot but not before she manages to secure the address of Harper Dutch (Katey Sagal) half of 1980’s C&W superstar duo ‘The Dutchess Sisters’ a pair of big haired, cowboy boot wearing caterwaulers who have since disappeared into obscurity with Harper now something of a recluse but rumoured to be looking for a comeback. Jordan & Leigh are big fans and the pair decide to seize the moment and doorstep Harper in a bid to record a comeback single with her. Initially cranky a reluctant Harper begins to warm to the girls and the idea of recording a comeback with them after listening to them perform in her house a little like the old X Factor auditions when the wannabes went to the judge’s houses indulging in all types of histrionics leaving little wonder that Simon Cowell is the way he is. But it’s not long before Harper starts playing them off against one another  growing increasingly unhinged as she does so and spends the last act screeching, ‘Atone! Atone!’ in much the same way as the writer of ‘Achy Breaky Heart’ must have been told over the subsequent years since it was launched on the public

The Nashville scene is a great background to set the horrors of Torn Hearts and is one that’s not really been used before and the sartorial atrocity of sequins and tasselled sleeves has only ever been seen on a Liberace TV special before. But this is very much a female led film with the two male actors in supporting roles.  The film certainly embraces and camps up its setting – a mansion adorned with big haired self-portraits and neon coloured garishness is the stuff of nightmares although for gore hounds the special effects budget doesn’t match that of the production design. But despite the motives of the murderous mayhem going a little awry (and as one character rightly says, ‘This doesn’t make any sense!”) Torn Hearts is an entertaining distraction from more graphic horror films .